Tinder may hog the headlines with its mobile-first approach to dating, but Hinge has been making inroads with its own take on what a social dating app is all about since its launch in the U.S. last year.

After a year of explosive growth that brought in north of $16 million in funding, Hinge is today launching outside the U.S. for the first time, kicking off in London. 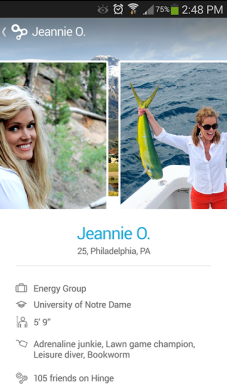 While Hinge does share similar traits to Tinder, there is one core difference between the two services. Though Tinder relies on users’ Facebook accounts to garner basic profile data, it’s generally all about hooking up with complete strangers. Hinge, on the other hand, uses Facebook to help match you with friends-of-friends through the social network. It displays details such as name, workplace, education, and the friends you have in common.

Hinge has hitherto been available in Washington D.C., Philadelphia, Boston, New York City, Chicago, San Francisco, Atlanta, Dallas, and Los Angeles. And with its launch in London, Hinge CEO Justin McLeod is hopeful of continuing on its upwards trajectory.

“Our user base has grown six times in the last year alone and nearly all of our growth has been via word-of-mouth,” he said. “We’re confident we’ll have the same success in the U.K.”

Available for Android and iOS, Hinge is open for business in London as of today, and we’re told that it will be arriving in its third country later this month when it hits Toronto, Canada.

People elsewhere in the world can actually download the app too, letting them sign up to the Hinge waiting list. Armed with this data, Hinge can then determine which markets are ripe for launch, and those on the waiting list will be the first to know when it happens.