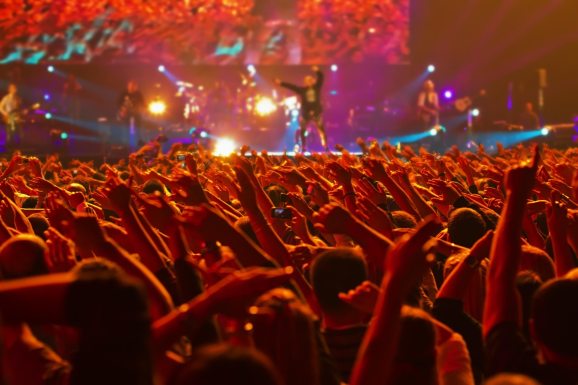 TuneGo wants to help you fill a concert hall like this.

TuneGo, a fledgling music discovery service for indie musicians, has raised $1.2 million and is planning the official launch of its platform for later this quarter.

The idea is to provide a platform for independent musicians to get their work in front of potential new fans — and also to connect those musicians with producers and record industry execs who can help them navigate the business. Each of those execs has their own portal on TuneGo, where they can check out promising artists, check out their “TuneGo score,” and potentially make connections with them.

“As you may know, producers and A&R departments are not able to sit around and listen to 10,000 demos or wade through the millions of artists on social media, which is why the TuneGo Score is so important,” said John Kohl, cofounder and CEO, in an email to VentureBeat. “TuneGO is able to cut through the clutter and noise by providing the filtering mechanism that makes talent discovery easier for the industry decision makers.”

That TuneGo score is based on an algorithm that analyzes social network activity, crowdsourced feedback, live event activity, published reviews, and more. The company claims that it can predict an artist’s likelihood of success based on analyzing that data.

For social data, it measures activity on Facebook, Twitter, SoundCloud, and YouTube, including the total number of subscribers, followers, likes, mentions, and retweets, according to TuneGo.

Here’s how the process works from the artist’s point of view, according to the company:

Once an artist registers on TuneGO, they are invited to submit content, complete a career development survey, and determine their TuneGO Score, the core of the TuneGO platform. … This score ultimately guides producers and industry executives in determining which artists to focus on for professional development and opportunities.

So far, over 1,000 indie musicians have signed on to the platform. There are also about 1,000 consumers using the platform — a small number, since the company hasn’t focused on building out that side of the business yet.

Competition for this nascent company includes Reverb, which connects fans and musicians, and TuneCore and CDBaby, which give musicians distribution platforms. For digital distribution, most musicians probably count on more established players, like iTunes, Spotify, and SoundCloud — though such channels aren’t optimized to help indie musicians get discovered, and they certainly don’t generate much income for those musicians, as numerous news stories and blog posts have documented.

Long term, this company’s biggest challenge is probably just convincing enough musicians and fans to check it out.

TuneGo is based in Las Vegas.