Mario and Link, racing kart-to-kart on Hyrule Circuit. Phoenix Wright and Professor Layton, solving court cases. Gaming is full of popular characters invading other stars’ worlds — and if that breaks continuity or some fragile timeline, who really cares?

Step down from the big leagues and you’ll find that indie games are doing the same thing. The spelunker from Derek Yu’s cave-exploration game Spelunky appears in the blood-splattered land of Super Meat Boy, and then they trade places, with Meat Boy joining the fedora-wearing adventurer on his home turf.

These cameos are everywhere in indie games. So why are developers in one of the most creatively fertile spaces in video games lifting characters from each other’s work?

GamesBeat turned to five studios to find out why.

Making it happen: from email to code

Guacamelee’s Juan Aguacate pummeled his way through the land of the dead and back to the world of the living, but his journey isn’t over. He’s set to appear again in Prismatic Games’ real-time strategy game Hex Heroes and Paperbound, a multiplayer battle arena from developer Dissident Logic.

“On occasion, developers will reach out to us about the possibility of including some aspect of our game in theirs,” Chris McQuinn, a designer at Guacamelee creator Drinkbox Studios, told GamesBeat in an email. “Sometimes, we pass on the offer; sometimes, we take the offer. Often it comes down to if we’ve met them in person at an expo or some other type of event. It’s important to have a personal feel to it.

“If the inclusion of one of our characters is pretty minimal — some reference in the background, a skin which doesn’t change the abilities of the character — then it’s a pretty straightforward process. We say basically ‘OK’ in an email.” 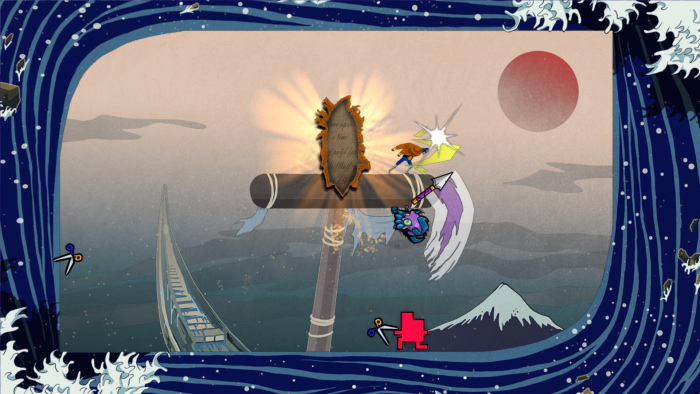 Above: Spotted: Juan from Guacamelee and the Locksmith from Monaco.

The legality is simple. “I think being a smaller developer makes it a lot easier,” said McQuinn. “We don’t have to worry too much about our intellectual property being misrepresented, we have no shareholders to account to if something goes wrong.”

Dan Holbert, the founder of Dissident Logic, told us that he had never even met anyone from Drinkbox before the PlayStation Experience event in November. But Juan Aguacate fit Paperbound perfectly — he’s a well-liked 2D character that would work well in a fast-paced 2D action game. The inclusion of him and other indie game characters (such as Captain Viridian from VVVVVV) meant writing all-new code.

“Paperbound’s original characters are all animated much like a character in a 3D game — the images were attached to a skeletal rig and animated in a [3D modeling and animation] program like Maya,” Holbert said. “However, the assets I received for the cameos were mostly just single images or sprite sheets. Juan, in particular, was challenging because I had to figure out how to get a Flash file into Paperbound. I ended up exporting every single frame to a separate PNG image [a format short for “portable network graphics”] and then writing a little program to combine the ones I wanted into a sprite sheet.” 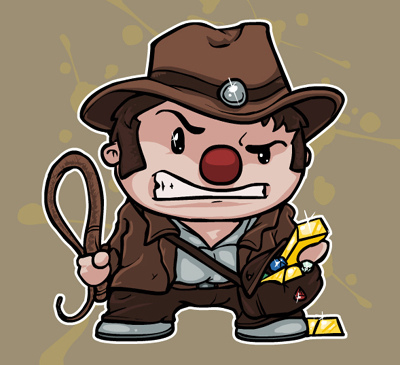 Above: The spelunker in Super Meat Boy.

That process sounds a lot more complicated than an “OK” to an email, but Holbert said all that developers have to do to make a crossover happen is send him an email or tweet. According to Edmund McMillen, one of the creators of the frantically hard platformer Super Meat Boy, the trend had similarly humble beginnings.

“It didn’t really exist till we did it in Meat Boy and Super Meat Boy,” McMillen told us. “Once we got the ball rolling, people just took it and ran with it. … I guess we just kinda opened Pandora’s Box when it came to indie game character crossovers.”

The little guys — and one big community

Making crossovers happen in indie games isn’t so hard, especially when you’re friends with the developers.

“Bit.Trip and Spelunky [developers] both allowed us to use their characters in our game long before Meat Boy was released,” said McMillen, “and the devs are also close friends of ours — as were most of the cameos we included in Super Meat Boy.”

Spelunky developer Derek Yu said much the same — he liked McMillen and he liked Meat Boy, and that’s what makes these partnerships happen. It’s also a nice chance for a little cross-promotion.

“For me, it’s mostly for fun, though — I had a good time drawing Meat Boy in my own style and putting him in the game,” Yu told GamesBeat. “And players seem to enjoy the references. … Meat Boy was a good fit for Spelunky as a hidden character. There’s a level in Spelunky called ‘The Worm’ that takes place inside a giant sandworm, which seemed like the perfect place to rescue him!” 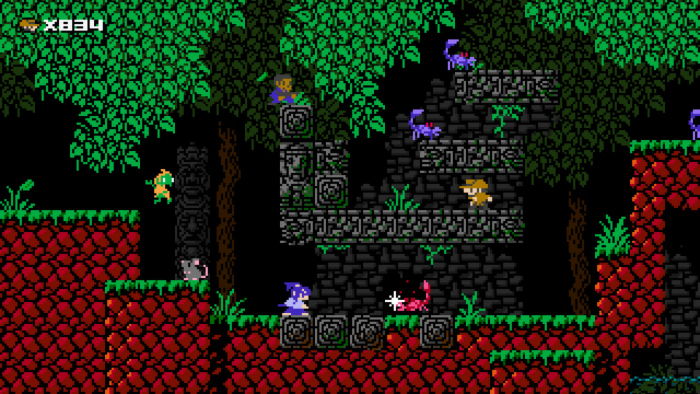 Above: A scene from notoriously difficult indie game 1001 Spikes.

For Nicalis, the developer behind the trap-riddled platformer 1001 Spikes, cameos were also a way to support fellow indie developers, including someone who gave a lot back.

“Through the course of development, we gave the updates, including how their character(s) would look and play,” Nicalis president Tyrone Rodriguez told GamesBeat. “In the case of El Testigo, it was intended to be a surprise. Jonathan [Blow] had always been a huge supporter and fan of the game and literally the first person to be asked to be put on the beta when it was made available. During development, he gave a lot of his time for playtesting and feedback, so we wanted to do something special and create a character based around him.”

The character, El Testigo, translates to “The Witness” in Spanish, the same name as Blow’s massive upcoming puzzle game. The cameo was a thank you — a sign of acknowledgement from one developer to another.

“I think indies inspire other indies,” McQuinn said. “I know that is the case with us. So, for us, it’s an homage to other indies that we really respect.” 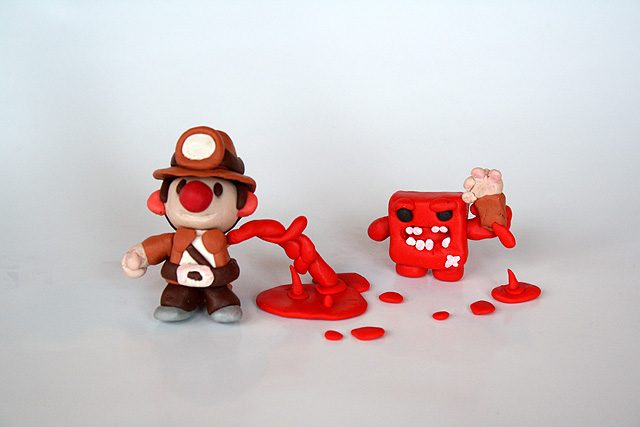 Above: Spelunky Man and Meat Boy, hand in … err, hand.

That boost of support is extra welcome in the indie space, where you’re competing against each month’s triple-A releases for visibility and player attention.

“The biggest problem for any indie game is being known,” Holbert said. “Some games that absolutely huge in terms of the indie world — Braid, Super Meat Boy, Monaco — are still unknown to the average person you talk to in a GameStop. There’s always a bigger audience to reach. So putting your characters and someone else’s game is just one more way to let people know about yours. I don’t think I ever heard of Bit.Trip Runner until I played Super Meat Boy. And there’s also just the cool factor of seeing your character running around in someone else’s world.”

It’s a trend that likely won’t go away any time soon.

“We all still play games, and to be able to see Commander Video, Nyx, and Curly Brace next to President Thompson or Aban is great,” said Rodriguez. “But, really, I think the value is for players who ‘get it’ when they see all these characters together.”

“It’s probably about a lot of things, but in the end it’s mainly about friendship and trust,” said McQuinn. “It’s us saying to another dev, ‘Ya, you know what, we trust you to respect and properly represent our characters, that we deeply love.’ It’s a nice nod to each other in an industry that can be a bit ruthless at times.”