On the final day, though, I made up for this in style, diving headfirst into a ton of indies on show in the main hall of the impressive Beurs van Berlage building, across from Amsterdam’s central train station.

Below are eight of the best games that I found — from Australia, Germany, Sweden, France, Belgium, Switzerland, the U.K., and Lebanon — some of which you’ll probably read about for the first time here.

Replay: VHS is Not Dead

I’m a sucker for VHS, having grown up in the videotape-obsessed ’80s. Replay: VHS is Not Dead taps into that old school mentality, creating an ingenious PC puzzle platformer that gives you control of two characters who need to work together. Rewinding the action lets you switch characters and synchronize their actions.

The winner of the Audience Choice award at Casual Connect was originally a final-year student project, but it’s going to find a bigger audience soon enough thanks to the developers’ team-up with French studio Neko Entertainment. Above: Replay: VHS is Not Dead uses a clever time-manipulation mechanic.

SwapQuest effortlessly takes the tile-swapping mechanics of the classic puzzle game Pipe Mania and turns it into a beautiful, addictive, mobile role-playing experience. Choose a class and keep your hero moving up the screen — avoiding the constant advance of the evil horde — by building them the best path. You’ll encounter enemies, fight bosses, find treasure, and level up your skills and equipment as you progress through 13 different levels.

German developer Constantin Graf has been working on SwapQuest for two years, and his attention to detail is remarkable. Above: SwapQuest mashes the puzzle and role-playing genres together.

Progress is clever. Each minimalist screen is a puzzle to solve, forcing you to think deeply about manipulating your tablet in order to progress. Without giving too much away, it had me pressing my nose to the screen, pretending I was flying, and tapping my fingers like a madman. All on the command of just a few words.

The developers told me that Progress is best played in a group or shared, as group thinking will come up with a solution to even the most seemingly impenetrable puzzle. Although its replayability is questionable, you’ll feel pretty darn pleased with yourself for getting to the end — and it’s a game you’ll be talking about and recommending to friends for days afterwards. 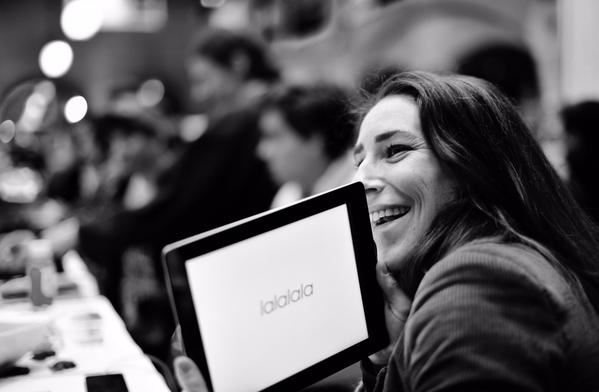 Above: Progress will make you laugh, and it might make you cry.

Guns, Gore, and Cannoli is a gloriously bloody side-scrolling shooter that throws 1920s gangsters into a zombie outbreak. Breathing fresh life into the overplayed zombie genre with its comic-book styling and roaring twenties vibe, Guns, Gore, & Cannoli supports local co-op for up to four players.

It picked up a nomination for best audio at the Indie Prize awards, and deservedly won in the best PC game category. You can download a PC and Mac demo at Crazy Monkey Studios’ website. “Goats are the new black,” said the guy in front of me when Goat Punks received its nomination for Best Multiplayer in the Indie Prize awards. And while goats are pretty cool, they’re arguably not as cool as Goat Punks developer Antonio Alberto Santiago — an Australian animator, designer, and developer, and probably the most laid back person in Amsterdam last week.

Santiago has created a frantic king-of-the-hill game with goats, weapons, and asynchronous multiplayer. It uses player behaviour to build intelligent A.I. opponents that challenge your ascent to the top of the mountain, shooting fireballs and more in a constantly changing battle. What’s most impressive, though, is Santiago’s offhand mention that his game is pretty popular in China — mostly because of the cute art style, he reckons — and that he only really made it to see if he could make a game. Oh, and he’s also started 3D-printing goat toys from the game. 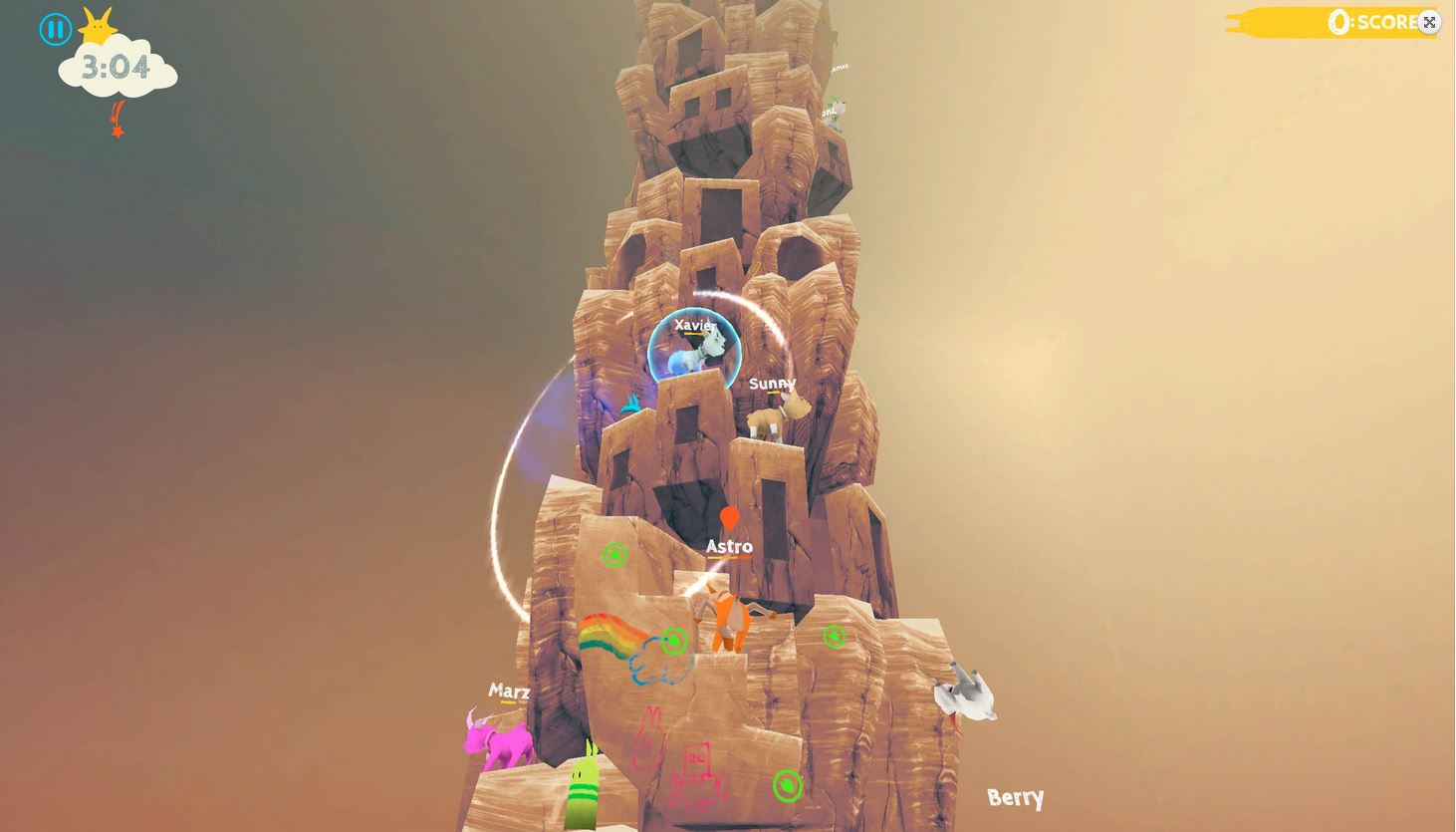 Above: It seems goats really are the new black.

Lebanon doesn’t have a huge game development scene, so it’s all the more impressive when a game like Zero Age comes out of it. Made by two guys — Majd Akar and Hosni Auji — the isometric puzzler looks great, its classical score sounds pretty cool, and it has an extremely cute female hero. One to sit and take your time over.

Without a doubt he prettiest game at Casual Connect, Lumino City won the Indie Prize for best game art. The environment is lovingly built from handcrafted sets, which the team photographed, filmed, and placed in the game.

Already out on PC, Lumino City is heading to iOS, and its glorious world is even more enticing when you can reach out and touch it directly.

For a student project born out of a Game Jam session, Schlicht is remarkably polished. It’s based on the simple premise of light and dark, where white damages black and visa versa. Two players must work together and communicate effectively to help their orbs navigate a series of increasingly complex levels.

The title is a combination of the German words for shadow and light — schatten and licht. It’s the sort of simple but devilishly clever game I can imagine Sony or Microsoft snapping up for their console-focused indie initiatives. 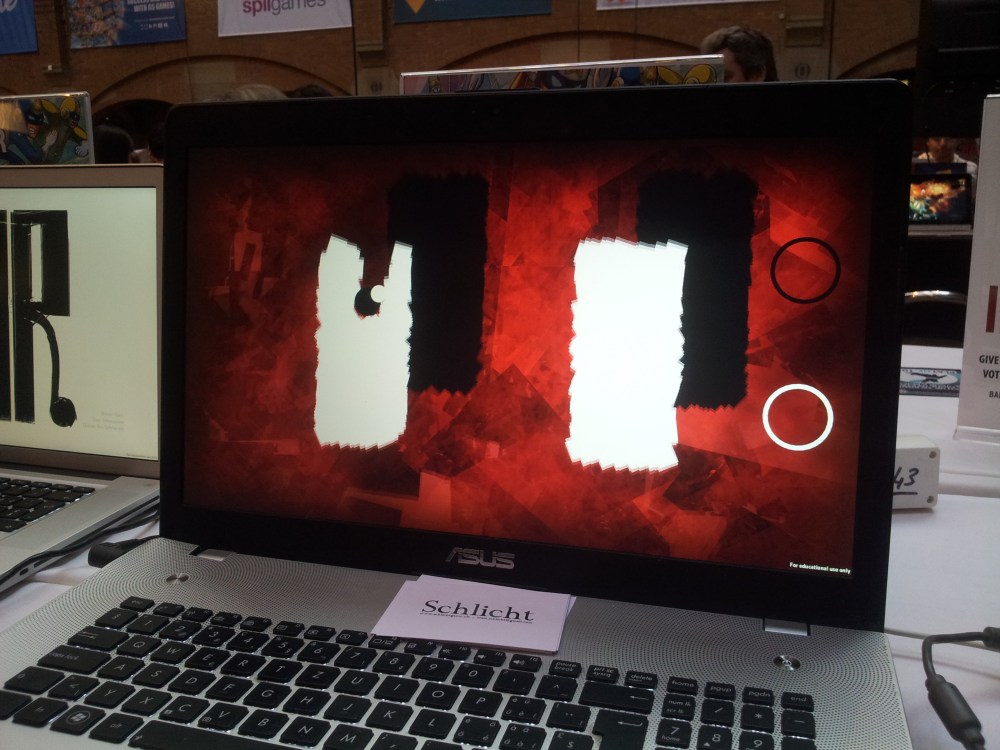 Above: Schilcht is a student project from the University of Zurich.