Looking for love this Valentine’s Day? A new online dating service called SparkStarter launched this week, promising to help singles find romance — with a little help from their friends.

Okay, so if I had a dollar for every time a new app promised to revolutionize a particular industry, I’d probably be a rich man. But after spending some time with SparkStarter, I’m convinced the app might actually be on to something.

Instead of traditional online dating on services like Tinder, OKCupid, and eHarmony, which rely on singles viewing profiles of other singles and making their own judgement on who might be a good romantic partner, SparkStarter uses the ancient art of matchmaking to set people up.

SparkStarter encourages both single and non-single people to use its dating service, though for very different reasons. Everyone who signs up for SparkStarter must sign in using Facebook, and once you sign up the app pulls relevant information on your friends and friends of friends to generate possible matches.

If you’re a single person, you go through the same motions as apps like Tinder, looking at profiles of people the app thinks might be a good fit, and tapping yes or no to indicate whether you are or aren’t interested in that person.

If you aren’t single however, the service gets much more interesting. Attached people get to play Cupid on SparkStarter, selecting the single friends they want to set up, and connecting them with the friends they’re connected to on Facebook that might be a good match. 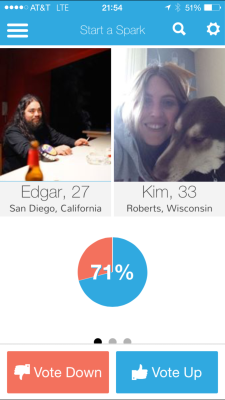 Above: I think it’s high time Edgar and Kim gave dating a shot.

For example, say your friend Edgar has been single for way too long, and you think it’s high time Edgar went on a date. When you tap on the matchmaker function within the SparkStarter app, you can search for Edgar in the search bar, tap on his profile to see who the app thinks he’s compatible with, and you can either vote down or vote up that pairing by tapping on the appropriate button under the match profile. Maybe you think Edgar would be an awful partner for your co-worker Jenny (vote down), but is a perfect match for your high-school friend Kim (vote up).

Once you vote up a match, the connection will show up in each person’s queue to judge for themselves. If they both are interested, they can connect and the match will show up in their “My Matches” list where they can strike up a text-based conversation similar to Tinder. For them to actually connect, they’ll need to download the SparkStarter app for themselves, and a menu gives you the option to invite them to the service if they aren’t already SparkStarter member.

One of the ways SparkStarter sets itself apart from the competition is with its compatibility score, which is calculated using an algorithm that looks at things like how many mutual friends people have, their age, and what their interests are, which is derived from both the things you put in your Facebook profile’s “About” section, as well as those things that you’ve “liked” on Facebook. The compatibility score is a dynamic score, so the more people that vote up a connection, the higher the compatibility score will be, and vice versa.

Unlike services like Tinder, SparkStarter connects people regardless of location, so users can find love outside of their designated geographic area. That last bit is both a blessing and a curse, however, as connecting people in different cities or states (or countries, if they ever get there) is mostly meaningless unless one person is willing to relocate. The idea of relocating for a romantic relationship is a long shot at best, especially with people very early on in the dating process.

SparkStarter’s CEO Tony Kramer got the idea for SparkStarter in 2009, when he and a friend were at a bar talking about dating. Kramer was single at the time, and had a tough time finding the right girl to date. His friend mentioned that he had “tons of Facebook friends,” and suggested that there had to be at least one he was interested in. The friend was right, and three years later, Kramer married the woman he was matched with.

Shortly after his wedding, Kramer was at a friend’s wedding talking with other guests about how they got connected with their partners. Almost all the couples he spoke to indicated they’d been matched up by a friend, Kramer knew that it was wroth exploring building an service to make it easier for matchmaking to happen digitally. And SparkStarter was born.

SparkStarter is a Minneapolis-based company that has raised a total of $450,000 to date from the founder and unnamed investors in Minneapolis and San Francisco. The SparkStarter app launched on Tuesday, and is free on iOS and Android devices.