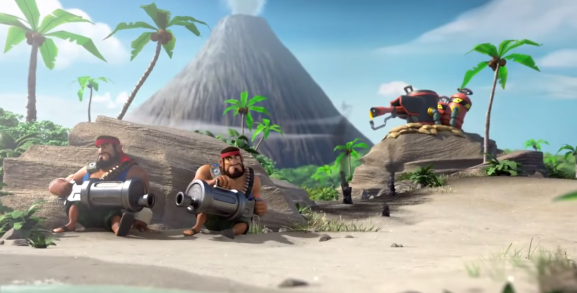 Supercell’s U.S. advertising campaign for its strategy war game Boom Beach — including prime-time TV sports slots — paid off, as it rose five places on the charts and cracked the top 10 for revenue on the Apple App Store and Google Play combined. Industry-intelligence firm App Annie noted that Boom Beach’s successful rise to eighth place was driven primarily by the U.S. market.

“The strategic war game’s rise on both iOS and Google Play coincided with a strong marketing push from Supercell, who spent heavily on national TV ads promoting the game in the United States,” said App Annie’s January report.

With mobile gaming worth close to $21 billion globally last year, it’s unsurprising that companies like Finland-based Supercell want to cement their place in the market. Supercell continues to lead the combined App Store and Google Play revenue chart worldwide with the seemingly unstoppable strategy game Clash of Clans, and its farming sim Hay Day is still sitting in the top 10 at No. 9. A three-pronged assault on mobile revenue will give Supercell’s competitors real cause for concern.

“Created exclusively for the Chinese audience, Activision’s world­-renowned franchise has a great opportunity to succeed when coupled with Tencent’s market dominance and proven track record of distribution,” notes App Annie.

The one game that Tencent couldn’t shift from the top of the iOS download chart was the quiz title Trivia Crack. “Trivia Crack has been unstoppable,” said App Annie, “with over 20 million daily active users, TV game shows in Latin America, and even licensed merchandise to its name.”

Trivia Crack’s revenue also grew significantly in January, with the option to buy an ad-free version of the game at the heart of this growth. “Being able to pay for an ad-­free experience has been a key part of Trivia Crack’s success,” said App Annie.