E-sports games made $194 million in revenue in 2014. That number is less than half what an analyst is predicting the sector will produce in just a few years.

E-sports will reach $465 million in revenue in 2017, according to a report from research firm Newzoo. This chunk of the gaming market won’t just grow in terms of cash, as Newzoo also predicts the number of people who consider themselves “e-sports enthusiasts” will grow from 89 million last year to 145 million by 2017. On top of that, an additional 190 million will casually engage with e-sports content. With this potential for growth, a number of developers, publishers, and technology companies are looking for ways to latch onto the e-sports crowd. 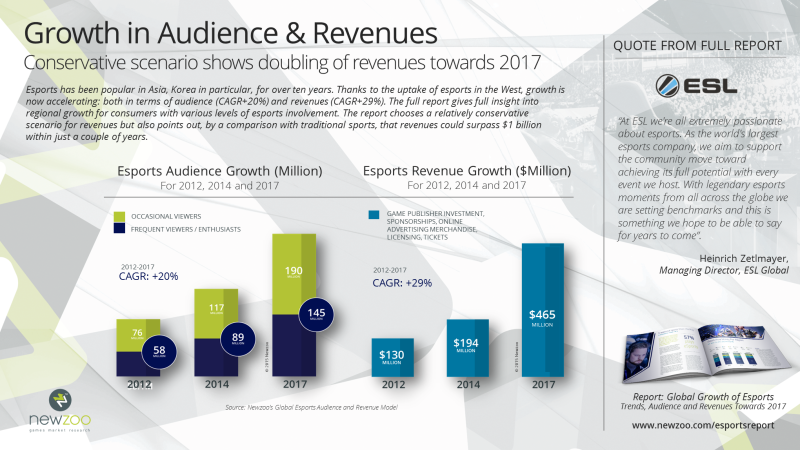 “E-sports has been popular in Asia, Korea in particular, for over ten years,” reads the Newzoo report. “Our report chooses a relatively conservative scenario for revenues but also points out, by a comparison to traditional sports, that revenues could surpass $1 billion within just a couple of years.”

Competitive gaming is already drawing massive crowds and generating revenue from that audience in several different ways. In 2014, multiple e-sports events had viewership numbers in the high double-digit millions. The championship for the multiplayer online arena battler League of Legends, for example, drew more than 32 million online viewers. That’s in addition to the thousands of people in attendance live at the arena.

With numbers like those, which compare favorably to traditional sporting events like the NCAA’s March Madness college basketball tournament, e-sports organizations like Major League Gaming and ESL have snapped up quite a bit of money from brands looking to reach the highly sought after demographic of engaged men ages 15 to 34.

But advertising, something that traditional sports have made billions of dollars from, is only a part of the plan. Companies like Valve, which runs the Dota 2 MOBA, has found new ways of generating revenue from an audience. During the last few championship events for Dota 2, Valve has sold something called the Compendium. This is like an interactive event program where players can choose fantasy teams and earn in-game items. Valve sells the Compendium for $10, and it takes a chunk of that money, but it puts the rest into the prize pool for Dota 2 championship. This is just one example of how e-sports is using its digital nature to engage fans in new ways.

“ESL is approaching e-sport monetization across the full ecosystem,” a spokesperson for ESL told GamesBeat. “That means working with all relevant stakeholders, players, teams, game publishers, and so on to improve monetization, following traditional sports businesses. These efforts are focused on, but not limited to, merchandising, ticketing, media rights, sponsorship, in-game monetization, and e-sport specific crowd funding.”

The ESL even recently got into game development by releasing a tool that will perform multiplayer matchmaking for indie studios.

But to reach that best-case scenario, where competitive gaming is generating more than $1 billion by 2017, e-sports will have to keep finding new ways of generating revenues from fans. That’s one of the ways that these new spectator events are very different from traditional sports.

“E-sports, which is a product of a digital age, gets 34 percent of its revenue from online advertising and still relies on the investment of game publishers,” reads the Newzoo report. “This money is indirectly recouped by the publishers through spending on or in their games. But now, e-sports is quickly evolving into a business of its own.

“Many sponsors are jumping on board and consumers are contributing to championship prize pools and paying to attend online or real-life events. As the e-sports market matures, its revenue mix will more closely resemble that of traditional sports which saw 57 percent of revenues come from sponsorships and selling media rights in 2014.”