Chris Cunningham, Global Head of Mobile at ironSource, will be moderating one of Mobile Summit’s fireside sessions.Taking place February 23 and 24, Mobile Summit is limited to 180 senior-level execs who tackle the most urgent mobile issues facing them in 2015. It’s not too late to apply for one of the remaining seats.

2014 was the year that mobile stopped being the next big thing and became THE BIG THING. Investors poured money into any app that showed the slightest signs of traction, new service providers popped up like mushrooms and most importantly, app developers started seeing some serious profits.

Just thinking back to two years ago, everyone and their neighbor had an idea for a new app. Today, these apps have funding, development teams, and slick demos. The success stories like Flappy Bird and 2048 alone were an inspiration to this generation of app developers showing them how far an original idea can take you.

Generally speaking, in 2015 we can identify four types of apps, each with their own characteristics and challenges.

1. Mobile ecommerce — Shifting the focus from market share to engagement

Ecommerce giants have been adapting quite fast to the mobile world. Most of the major players with a significant desktop operation in place spent millions of dollars in 2014 in paid distribution to secure their customer base and to acquire mobile market share. Nevertheless, there is still a large portion of users who use mobile primarily as a ‘discovery channel,’ browsing apps, and mobile web to get inspired — and are then migrating back to desktop to complete the purchase.

What’s the big shift in m-commerce in 2015? Engagement Campaigns via Deep Linking will take off! Deep linking is the future, so you are going to want to know this one. A deep link is a link that takes you to a specific part of an app. Think the equivalent of a specific web page within a website, but for an app.

Deep links are used in engagement campaigns because this allows ecommerce apps to advertise an actual item instead of only the ecommerce app itself. Let’s tell this story with Amazon as an example: A user goes to their Amazon app or website to check out Beats Headphones without making a purchase. The next day this user is in the middle of level 167 on Candy Crush when they get an ad from Amazon for the exact Beats Headphones. Click on the ad and voilà — you are linked to that exact page for the headphones within your app, no searching required.

By essentially bringing cross-device retargeting to the equation, we are all going to see how retailers report more and more acquisitions via mobile devices. This also means we will we see a shift from the CPI models conventionally used in the industry to CPC/CPA models.

Digital game development may have started as an art, but it’s gradually become a science. 2014 saw two killer apps — Candy Crush by king.com, which showed signs of fatigue before a powerful comeback at the end of year, and the mighty Clash of Clans, by Supercell, which remains far ahead of everyone else. But that didn’t stop everyone from trying to jump on the bandwagon — and some did so quite successfully. Just check out the top grossing apps on the Apple Store. Over 75% of these apps are a variation of Clash of Clans, Candy Crush, or a Casino game. It certainly looks like a formula for success has been discovered.

The imitation doesn’t stop at app concept; the design of Clash of Clans’ icon is also believed to have a magical effect on conversions — including non-strategy apps. Just check out some of the open mouth icons that Clash of Clan’s has inspired. 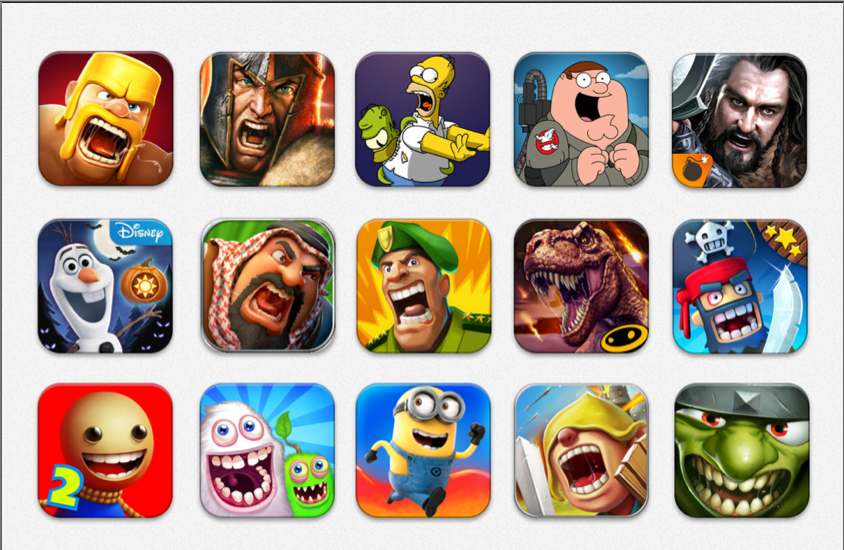 And it doesn’t stop at the very top grossing. 2048 was another app of the year that garnered over 600 copycat apps. The new hit of 2015 is not yet to be known, but we can expect game studios to continue their imitation and data-crunching skills at the expense of creativity and boldness.

Utilities are apps that improve our digital lives. The category includes launchers, antiviruses, multimedia players, etc. By now, this group has become very mature with a clear market leader in each category.

Now that they’ve acquired a comfortable market share, they are starting to look for the right business model. Most app developers have realized that only about three percent of their users actually pay for premium services, and have consequently turned to ads as an alternative revenue source. In parallel, with the rise of native and other more sophisticated ad formats, mobile ads have been evolving to be less disruptive to the overall user experience.

A great example of this is Clean Master by Cheetah Mobile, which delivers a monetization experience that is completely native to the application. Cheetah Mobile reported a 628% rise of mobile revenues in Q3 2014 vs last year and expects to double it each quarter going forward.

We can bet on this category to become much more significant in the publishers matrix of media vendors in 2015.

But not so fast. New services (Snapchat, Tango, YikYak) are emerging and it’s starting to look like FB is no longer the cool kid in school. In addition, two Asian giants, WeChat and Line, are both taking over their homeland markets and looking to take market share from Facebook in its home base.

WeChat allegedly spent $300M to penetrate the U.S. without success. Owned by Tencent, which is now worth $150B, it’s not likely to be their last try.

Consolidation in the form of M&A is very likely, but WhatsApp’s $19B valuation makes other acquisitions a challenge for all potential buyers.

The good news for investors is that these apps find the way to monetize by offering their data to marketers and creating very effective advertising. Both performance and brand buyers will be able to benefit from the immense amount of info they collect on their users for well targeted campaigns.

Chris Cunningham is Global Head of Mobile at ironSource. Chris is a digital advertising and technology expert and serial entrepreneur with a passion for mobile.

Omri Halamish is VP Business Development  at ironSource. With 8 years of digital media experience, he manages the business development for all mobile solutions available at ironSource.

More details on the sessions at Mobile Summit and be found on the event’s agenda page. Space is extremely limited — we’ve only got seats for a total of 180 executives — but it’s not too late to apply for one of the remaining seats.