Two-thirds of Americans think that we’ll be seeing drones dropping off things like clothes, books, pet food and more within half a decade. And 80 percent of consumers say retailers offering quick drone delivery will be more likely to get their business.

That’s the conclusion of a new general retail study from Walker Sands Communications, a Chicago-based PR and social marketing agency.

The full study, titled “Reinventing Retail: What Businesses Need to Know in 2015,” will be released tomorrow. For now, though, it’s worth noting that the non-scientific research, which surveyed 1,400 Americans, highlighted that consumers think companies like Amazon and Google are very close to realizing their ambitions to make deliveries by drone.

Notwithstanding Federal Aviation Administration restrictions on the commercial use of drones that currently prohibit such deliveries, 14 percent of those surveyed think drone deliveries will start within a year, while 22 percent feel it will happen by 2017. Another 30 percent think it will take up to five years before package-laden drones are buzzing our skies. 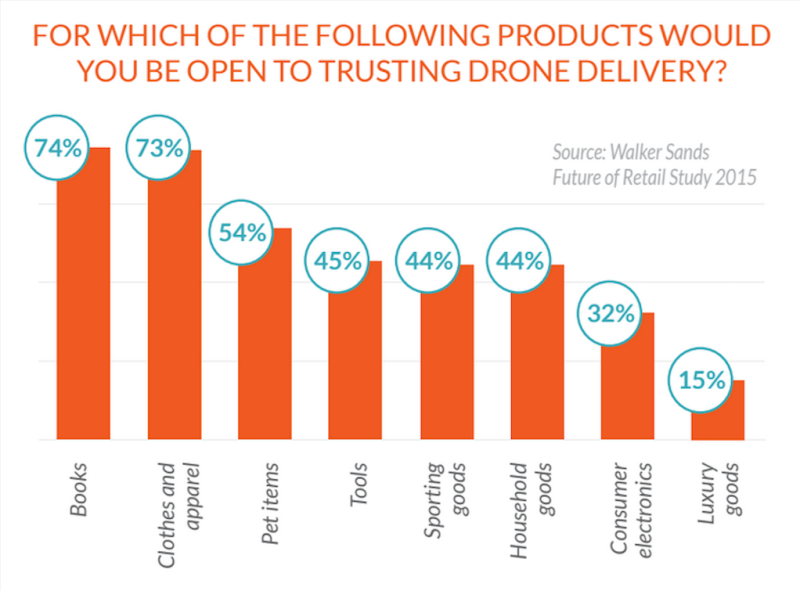 Above: Most people interested in package delivery by drone say they’re open to having books and clothing dropped from the sky.

The FAA proposed a set of guidelines last weekend that would limit non-recreational drones weighing less than 55 pounds to altitudes of 500 feet and speeds of 100 miles an hour. It’s not entirely clear how those rules, if implemented, would impact drone delivery.

Nevertheless, having Amazon’s name associated with package delivery by drone has done wonders for the public’s perception of the practice, even as regulations — and to an extent, technical limitations — have kept packages on the ground. “Drone-delivered packages may be an even bigger push toward a future where the majority of purchases are made online across multiple product categories,” Walker Sands wrote. “Four in five consumers say drone delivery to their doorsteps within an hour would make them more likely to purchase from a retailer.”

And, even as the public is opening up to the idea, people are also seemingly willing to open their wallets. “Consumers don’t just expect to receive online orders by drone,” Walker Sands asserted, “they are also willing to pay for it. Almost 80 percent of consumers are willing to pay for drone delivery if their order arrived within an hour, with nearly half…saying they would pay at least $5.”

Just 23 percent surveyed said they weren’t interested in drone delivery. That indicates, the report suggested, that “rapid delivery by air is fertile ground for retailers like Amazon that plan to push the limits of fast delivery.”

Of course, the public’s interest in drone delivery depends on what’s being dropped off. Three-quarters of people are interested in book delivery — hello, Amazon! — while 73 percent like the idea of having clothes appear from above. After that, interest drops off pretty quickly. Just 54 percent are interested in pet items, 45 percent in tools, 44 percent in sporting goods and household goods, and 32 percent in general consumer electronics. One wonders when we’ll see a drone deliver a drone.