BlueTalon, a startup concerning itself with restricting people’s access to data sitting inside the Hadoop open-source big-data software, is announcing today that it’s secured $5 million as it prepares to accept lots of new customers.

Also today, BlueTalon is taking the covers off its Policy Engine software that allows admins to set fine-grained controls about who can see what data inside of Hadoop, all the way down to rows, columns, and even cells. The system can also tell admins what people managed to access, as well as what people attempted to access but were not permitted to.

The new funding for BlueTalon shows investors believe there remains an opportunity to strengthen Hadoop when it comes to data security and make it more acceptable for big companies to use. Hadoop security startups like Gazzang and XA Secure have gotten acquired by companies that sell of the open-source Hadoop software; perhaps a similar outcome could be in the cards for BlueTalon.

The Apache Sentry open-source project that Hadoop company Cloudera introduced in 2013 provides some authorization capability, but BlueTalon’s tool is “far and beyond what Sentry can or will provide,” BlueTalon chief executive Eric Tilenius told VentureBeat in an interview. He pointed to BlueTalon’s granularity and its integration with several Hadoop components, including Cloudera’s Impala and Apache Hive.

On top of that, there’s a graphical user interface, making it more accessible for admins.

“We’re trying to make it as easy out of the box as possible,” Tilenius said.

Unsurprisingly, he said the focus at the moment is in Hadoop deployments in on-premises data centers.

“Our customers are telling us very that they want to control the environment that the data is in,” Tilenius said.

Tilenius declined to say how many customers the startup had, but he did say the startup is in the proof-of-concept stage with several companies. 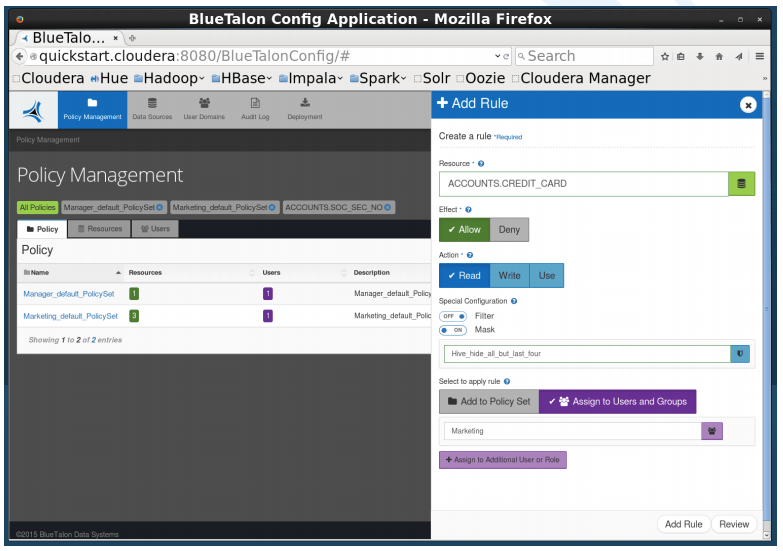 Above: A screen shot of BlueTalon’s policy management system in action.

BlueTalon claims to be agnostic when it comes to integrating with different distributions of Hadoop.

The startup has no immediate plans to release its own tools under an open-source license, Tilenius said.

To date BlueTalon has raised $6.5 million, including the $1.5 million round it announced last year.

Based in Redwood City, Calif., BlueTalon employs 20 people. The current headcount should be twice that by year’s end, Tilenius said.