Rod Humble is proof that no matter how long you’ve been in the gaming business, it can still surprise the heck out of you. 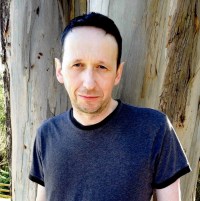 Humble’s led some big projects — he was chief executive at Linden Lab (the Second Life people), executive at Electronic Arts, and on the teams for everything from The Sims to EverQuest. All told, he’s worked on more than 200 games.

A few years back, he decided that what he really wanted to do was step down and work on some small projects, strategy games that touched on subjects he was interested in. He’d seen every side of the game development business; surely, it would be a breeze. That was before his 12-year-old killed him.

But back to that in a moment.

After an amicable departure from Linden, Humble spent some time working on Stava-Okh, a strategy game focused on the eastern front of World War II, and put out a few albums of (as he describes it) “super cheesy 90s style techno music.”

His latest project under his Chaphat label delves into a more ancient time: Cults & Daggers, a strategy game set between the death of Buddha and the birth of Christ, in which you attempt to found a religion, earn followers and take over the world. Primarily a single player game — multiplayer is accomplished by trading chairs at the computer or sending moves by email — the new game is available now for $30 on PC and Mac on Steam.

I asked Humble to tell me, after the decades of work he’d put into big-time studio game projects, what surprised him about the development of this one. Thirty minutes later, I was still listening.

“I wanted to get back to just making games by myself,” he said. “I don’t think I really have a career. But I’ve been doing around games and interactive entertainment for my whole working life. It felt really right to just go in and do everything on a project. I think everything that I do helps build to the next thing.

“Because I’ve done a lot of different roles around different companies, from CEO to designer to producer to marketing to programming … I kind of knew what I was getting in for when doing the whole thing. I think that was really helpful. I knew pretty much what the work was going to look like.”

The first surprise: It appears Humble owes an apology to all the teams he harassed to keep on schedule for all those years.

“My wife was extremely amused when I kept on moving up the ship date” for Cults & Daggers, he said. “When I was at EA and at Sony, I was always nagging programmers and teams not to slip. My wife was like, ‘Oh, this is pretty rich, isn’t it. I see, now do you think they felt?’ That was kind of funny.”

The game changes from sim to strategy

The second surprise was the path his game took. It started out as a sim religion game, he said. Then Todd Coleman, a friend working on the new massively multiplayer online game Crofour, told him he should look into what happened to Jesus’ apostles after he died. It wasn’t pretty, he said.

“They all died horrible deaths, except for one,” Humble said. “According to the stories, John is the only one who dies a natural death. They had amazing stories, all over the place.”

And that was the end of the sim. The game suddenly became a turn-based strategy title focused around the disciples of your new religion, whom you recruit and send into the world.

You can send disciples out to do plots and intrigues: assassinating other disciples, robbing temples, building your own temples, doing heretical acts and pinning on other cults. Above: The state of the world in Cults & Daggers.

“Everybody should be forewarned and forearmed: It is certainly not an easy to play game,” he said. You pick up to seven ages you’d like to play in, and three other cults you compete against (controlled by the computer or your opponents). At the end of each age, the one with the most Hope wins the age. After seven ages, the cult who’s taken the most wins. “Unless the world ends. And it can end.

“Pagan gods are trying to destroy the world. You get this tension that you have to fight the other cults, but you also have to cooperate with them to fight the gods and stop the world ending.”

Humble gets beaten by his son and his own AI

And that’s where the next surprise came in, when his game’s artificial intelligence did something he didn’t expect.

“I’m not used to working with that kind of competitive AI, particularly me programming it, and particularly being surprised by it,” he said. The computer cheerfully sent in undercover agents and purged his cult without ever revealing itself. “At first I thought it was a bug. I said, that’s not right, you can’t beat me, something was wrong.”

It was just the start in a line of ignominious defeats. In his very first multiplayer match, his 12-year-old son won by hunting down all his disciples and killing them in the streets, ignoring the hit his own cult’s reputation took in the process. 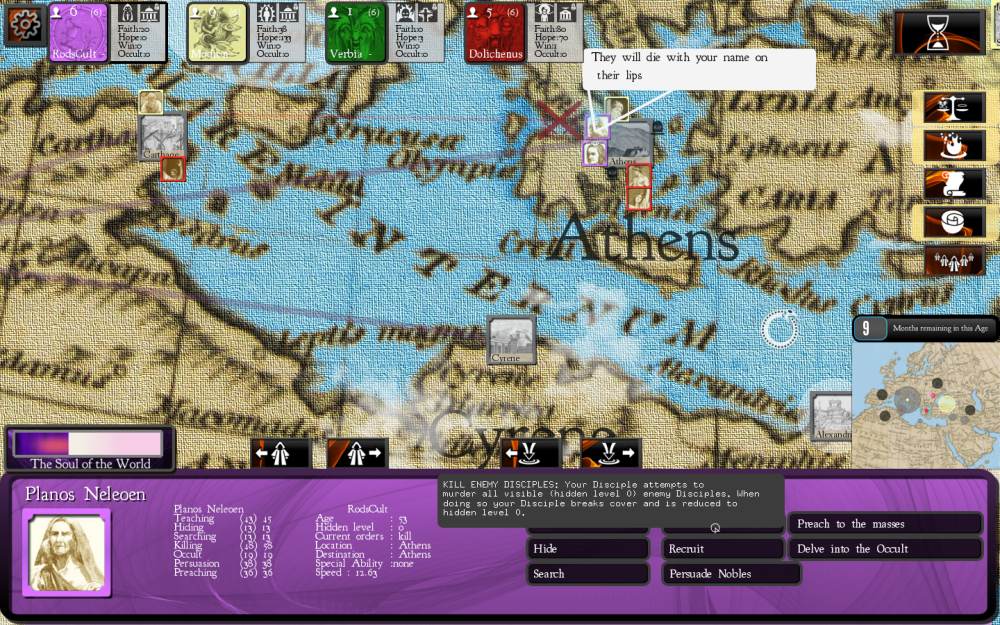 Above: We imagine Rod’s son’s game screen looked something like this.

“It never even occurred to me that anyone would do that,” he said. “It was unmerciful.”

Then his playtesters got started.

“There is no one way to win. As my son proved, you can certainly be a psychopathic killer and win. You can also win, as a playtester discovered the other day, by never standing still,” Humble said. “If you’re traveling, nobody can ever hurt you. The fact that it was kind of doable impressed me.

“Some just built temples. Some manipulated cities. Some picked martyrdom, openly preaching in streets until they were carried away by authorities.”

Rod Humble had deliberately programmed Cults & Daggers to be open-ended, but he was definitely surprised by just how open it had become.

“I think it’s amazing how you can become very used to your own design. Sometimes it takes someone else from outside to come in and puncture it.”

After tackling a sensitive subject in religion, Humble’s prepared to take that even further: His next game will likely focus on Vietnam.

“When it came to starting the new project, I wanted to do something about religion and faith. I’m not particularly religious, but I think that spirituality is so important to so many people,” he said. “I just don’t think there are enough games about it. I also love ancient history, particularly the Hellenistic era. The more I read about it, the more I just fell in love with this time period, between the death of Buddha and the Birth of Christ, where all these small religions flourished. The phrase ‘mystery cults’ kept popping out of the page.” Above: A disciple ready to be unleashed in Cults & Daggers.

“None of the interpretation of the actions in the game comes across as cynical,” Humble said. “It’s not meant to be cynical. It’s meant to be an enjoyable exploration of that myth that I created in this time period. People do have strongly held views. I wanted to make sure that it wasn’t going to offend people. People who aren’t believers and who are believers can enjoy it.

“For my next project, I think I may do a game about Vietnam, which I think is interesting, and I think is a subject — obviously a very sensitive one — but one that has kind of deserved an in-depth game treatment of all the different dynamics.”

He’ll tackle domestic politics on all sides, plus the military aspects, he said. Or if not Vietnam, then maybe the Russian Civil War.

“I don’t think I’ve got this strategy stuff out of my system just yet.”