Vegas in your front room

Derrick Morton is FlowPlay’s chief executive officer. He didn’t mess around when explaining the secret to the success of his popular social casino portal, Vegas World.

“Last month we were number 2 in the [online social casino] space. We’re doing about 49 cents per day per user — almost triple what many of our competitors are doing, and it’s due to the fact that we are really social.”

Vegas World’s avatar system is what sets it apart from the competitors, says Morton. Players can create a 3D representation of themselves (or what they’d like to be) and adorn it with accessories. Then there are social spaces within the game where players’ avatars can interact … and even get married.

“Nobody else has a multiplayer environment,” said Morton. “Everybody comes to Vegas World thinking they’re going to play slots. What happens is they get immersed in the game, they meet people from around the world, and sometimes they find girlfriends and boyfriends. It’s almost like real life.”

“We have a wedding chapel where 30,000 people have got married in the game, “ he added. “People go on to get married in real life.

And these people are spending up to $100 of real money to buy the virtual wedding rings that let them marry. 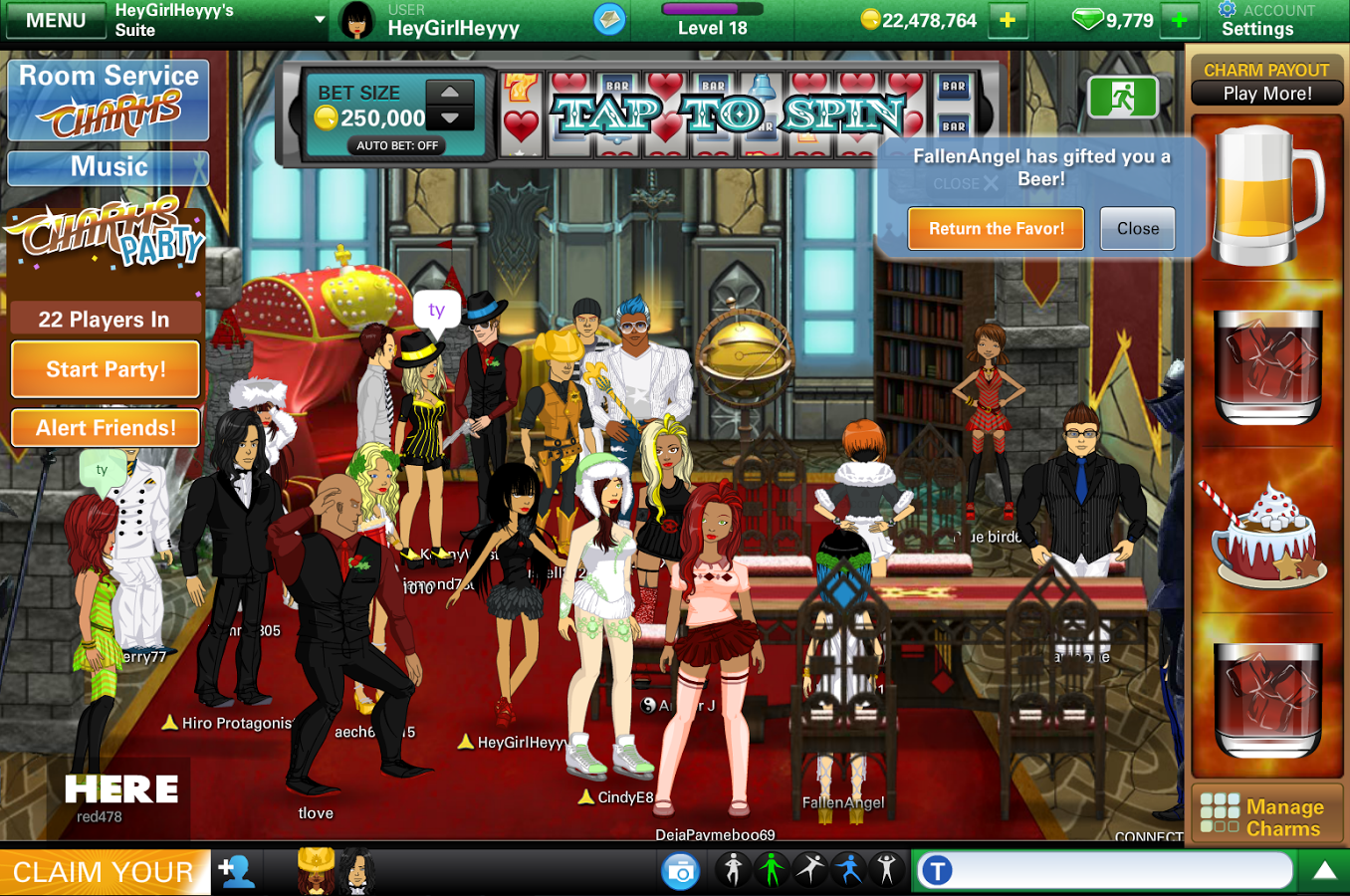 Above: Vegas World’s social areas are a big draw.

“It’s mostly women,” said Morton of Vegas World’s demographic. “65 percent women in their 40s, 50s, and 60s. Middle-aged women that are looking for a boyfriend.”

And the other 35 percent? “Men that have two accounts and have multiple girlfriends.…” jokes Morton.

But not everyone is after a long-term commitment. Some are just looking for a virtual sugar-daddy (or mommy).

“Everything that happens in the real world happens in Vegas World,” said Morton. “There are people that are gold diggers, that are looking for someone rich in the game to take care of them and pay for their winnings and losses — to buy them nice clothes and a nice ring.”

“There’s even guys that take advantage of nicer women that will buy them coins in the game.”

It sounds like a soap opera, I told him. “Oh, believe me, there’s tons of drama,” he said.

Morton says that the move to mobile hasn’t been that hard, but he points out that all Vegas World’s predominantly flash-based games needed rewriting in native code to work well on Android and iOS.

“We didn’t want to start being super-active in mobile until we felt like we were ready and all our games were ready,” he said. Vegas World’s newest mobile app, Fringo, is about to launch, and that’s been built specifically with the demands and restrictions of mobile in mind.

Recreating the social gaming experience on a tablet or phone is the trickiest part of that process, given the size of the screen and the need for chat.

“It is more difficult to chat on a mobile device because you’ve got to pull a keyboard out and do some chatting,” said Morton.

And that social interaction is what actually keeps people playing, and spending, in the game. 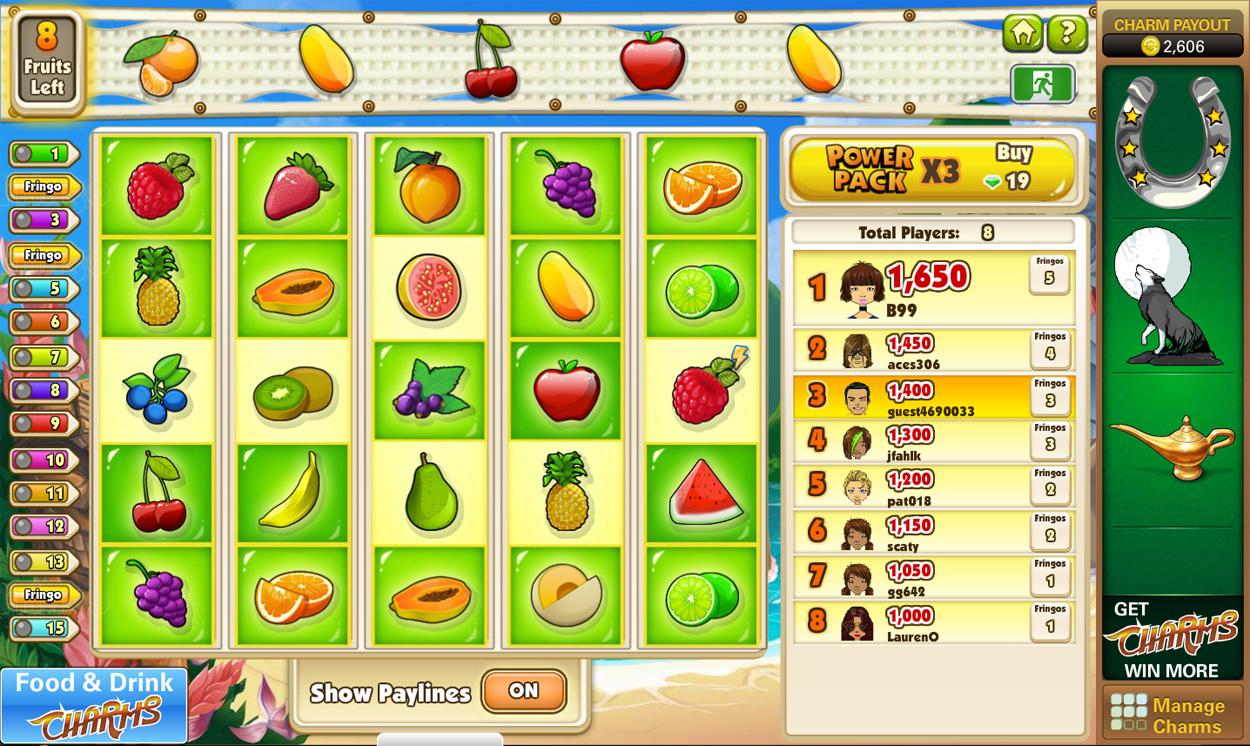 Above: Vegas World’s Fringo game is heading to mobile.

“Even when you’re in a game like slots, you’re still in a room with 10 people. You’re still buying people drinks,” said Morton. “In fact, that’s how we make most of our money, by these food charms that people buy,” he added, explaining how the lucky charms that players can buy — including cigars and Martinis — help not just them, but the whole room of players.

“If I’m in a slot room, and I buy a Martini, everybody in the room gets a Martini,” said Morton. “And now, the odds for the slot game have gone up from 95 percent payout to about 105 percent. Martini only lasts for, call it 20 pulls of the slot machine …  a Martini’s fairly cheap, it only costs like a dollar. We have $18 and $20 charms that could last you all day.”

Buying a round of drinks starts what Morton calls a “virtuous cycle,” and everyone starts getting involved: “I buy a Martini for the room and everyone says, ‘Thanks,’ and somebody else buys a soda.”

It’s a reflection on that social experience that players are getting, and it’s an experience many will continue to enjoy more on PC, despite everyone’s best efforts.

“Most people just enjoy the mere fact that they feel like they’re in an environment with other people,” said Morton. “You don’t have to interact, you don’t have to chat. But just being in a room and not being lonely, which is a lot of what this is about.

“Going some place where there’s activity kind of brightens their day rather than sitting at home on their phone feeling like they’re playing just by themselves.”