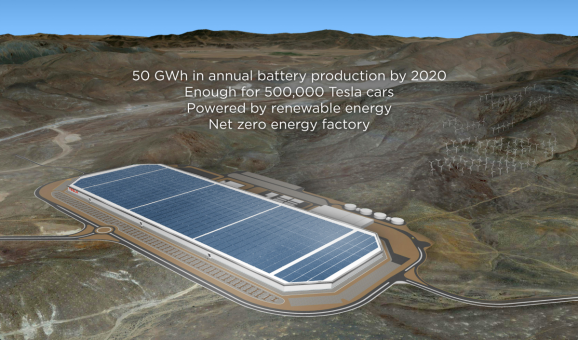 Tesla's "Gigafactory" will produce an enormous quantity of lithium batteries -- and will be powered by renewable energy, Tesla says.

The plant meant to supply large quantities of battery cells for future electric cars is expected to cost around $5 billion, and now Tesla has started to spend tens of millions of dollars toward that total.

Tesla has already spent $53.1 million on construction at the Gigafactory site, in fact, according to an analysis from the Reno Gazette-Journal.

The paper relied on Tesla permits filed with local authorities of Storey County, as well as assessors’ claims, in calculating the sum.

Permits approved through the first week of January show $34 million in construction projects, but that doesn’t include previous costs for ground clearing, retention basins, and pad creation.

Storey County does not require companies to submit cost estimates for this work, the paper said.

The cost of clearing vegetation and other prep work for new construction varies greatly depending on the site, but using a “conservative estimate” of $15 per cubic yard, the paper determined that this will add $2.1 million.

It also determined that a retention basin for capturing water runoff could add another $1 million, assuming a cost of $25 per cubic yard.

Finally, a local estimator contacted by the paper pegged the cost of pad construction at $16 million — bringing total construction costs so far to $53.1 million.

The flurry of activity surrounding what is billed as the world’s largest lithium-ion cell factory is already having a positive impact on the local economy.

The latest project approved is a 160,000-square-foot shell building, which is expected to be completed in July.

Gigafactory work has also attracted contractors and subcontractors from across Nevada, as well as Arizona, California, Pennsylvania, and Utah.

Local unions report significant interest from workers in many states. They view the high-profile Gigafactory as a “glamour project.”

That glamour is even attracting businesses from other states, lured to the Reno area by the halo effect of the Tesla factory.

Given the scale of construction and the importance of the Gigafactory to Tesla’s plans, it will likely to continue to attract plenty of interest.

The cost of this massive project is expected to be a major focus over the next two years, with cost estimates from analysts ranging widely.