Biba and PlayPower are teaming up to create augmented reality mobile games that make kids engage in real-world activities so they can get more exercise and outdoor play. 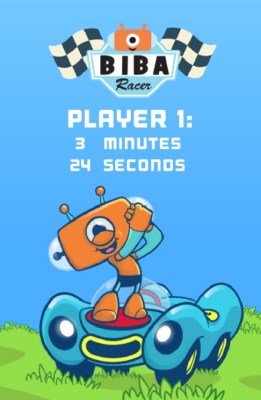 Vancouver, Canada-based Biba is partnering with playground equipment manufacturer PlayPower in Huntersville, N.C. Biba is creating new mobile apps while PlayPower is creating Biba-activated playgrounds. A demo video shows how kids can follow cartoon-style images on an app to engage in physical activity, from running up the stairs of a slide and then sliding down before checking back in with the app.

The problem with a lot of games is that they turn kids into couch potatoes or touch-screen zombies. So there’s a growing movement, dubbed exergaming (or active video games), to create games that make children more active. The digital-physical crossover is aimed at children who are growing up as “touch-screen natives.” The idea was so interesting that it drew the interest of Greg Zeschuk, a former Electronic Arts executive and the co-founder of BioWare.

“Biba’s mobile games designed for outdoor play are just a breath of fresh air,” said Zeschuk, the chairman of Biba, in a statement. “PlayPower and Biba are creating a new category, an inventive way to blend our new media habits with the health benefits and joy of active outdoor play. I am inspired by the category as a game designer and father.”

Biba’s games are designed for “refereed play,” keeping the phone predominantly within the parent’s hands, so that the kid won’t drop the phone or otherwise do anything unsafe with it. It also allows parents to have free-form fun with their kids.

“We want to change what screen time means,” said Matt Toner, the president of Biba, in a statement. “Our games bring kids back outside and turn playgrounds into the ultimate destination for modern families to go for healthy, active fun. Thanks to our partnership with PlayPower, we think we’ve blended the richest parts of mobile play with the unadulterated fun of jumping, swinging, sliding, and playing outdoors.”

Biba’s mobile games follow a storyline where playgrounds are transformed into the wreckage of robot spacecrafts that have crashed on Earth. Players interact with their own companion robot. Biba apps will provide information about the gameplay experiences available at each playground, encouraging families to search for new playgrounds.

The games are targeted at kids ages 3 to 9. The physical challenges are reinforced through digital points, high scores, and badges that can be shared online and with friends. Some of the Biba games will work with playgrounds that aren’t Biba-activated since Biba games enable players to tag which types of playground equipment are available to them.

“Active outdoor play is essential to the development of healthy children,” said Lynne Vandeveer, the chief marketing officer at PlayPower, in a statement. “Getting enough active outdoor play for their kids is a problem with which most modern parents are familiar.

“The solution PlayPower has developed with Biba blends the technology-driven world that kids expect with the joyful outdoor fun that parents remember from their own childhood. Parents’ concern for their children is justified by research that shows kids are spending too much time sitting still in front of a screen and not enough time outdoors. We intend to change that by engaging modern kids on their own terms.”

Biba is being spun out of Vancouver’s Zeros 2 Heroes Media. PlayPower has more than 1,100 employees, and it does business in 60 countries. Its playground brands include Miracle Recreation, Soft Play, Little Tikes Commercial, and HAGS.