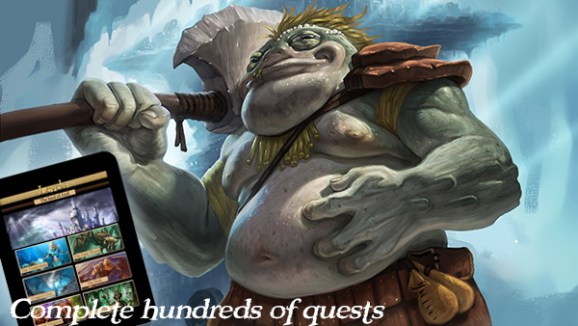 Spells of Genesis will use bitcoin tech to enable in-game trading and permanent digital ownership.

You can use the digital cryptocurrency to buy games and to buy items, but one developer wants to take bitcoin one step further.

Swiss studio EverdreamSoft said that its next mobile game is a trading-card battler called Spells of Genesis, and it uses bitcoin in its lore and to secure digital goods. You may use the cryptocurrency (in addition to your standard debit or credit card) to buy in-game items and booster packs to improve your deck, but EverdreamSoft also plans to use the bitcoin blockchain technology to lock purchases to the person who bought it. Digital card games are a growing sector of the market with releases like Heartstone from Blizzard and SolForge from Stone Blade Entertainment growing in popularity and revenues over the last year.

Bitcoin is one of the leading online digital currencies, which have grown in popularity in recent years and is under the control of no government. A blockchain is the sequence database that helps track where a bitcoin has come from and who owned it previously. By connecting in-game items to the bitcoin block chain, EverdreamSoft is essentially building a digital deck that it can never take away from you. Spells of Genesis is due out in August on iOS and Android.

“[You] will own your game items and cards not only in the game world but also on the bitcoin blockchain,” the studio explained in a press release.

But the functionality goes beyond ownership, as Spells of Genesis will enable players to trade and sell their goods.

“[In our previous card games], we saw some of our players trading rare cards for more than $1,000,” EverdreamSoft chief executive Shaban Shaame said. “Even thought it was not allowed by the terms of service. A whole economy emerged in the game [around trading]. Then we thought about how we could go beyond that and leverage digital goods ownership.”

To get the in-game economy going, EverdreamSoft plans to sell 70,000,000 BitCrystals, which is the premium currency used in Spells of Genesis to forge card packs or new items. The sale of these BitCrystals will fund development while simultaneously kickstarting the community.