Burger King is trialing a food delivery service in the U.K., three years after the fast-food giant introduced a similar initiative in the U.S.

The delivery area is restricted to a handful of regions for now, however, with residents in Northampton, Hull, Romford, Hayes, Gants Hill, Truro, Skegness, and Hornchurch able to beckon a Whopper direct to their doors, according to Metro.

As with the U.S. version of the service, Burger King has launched a dedicated delivery portal, which can be found at Burgerkingdelivers.co.uk, with all the classic meals available for order.

Customers can place orders over the phone too, with deliveries available from 12-3 p.m. and 6-10 p.m. each day. A nationwide rollout will take place later this year if the trial proves successful. 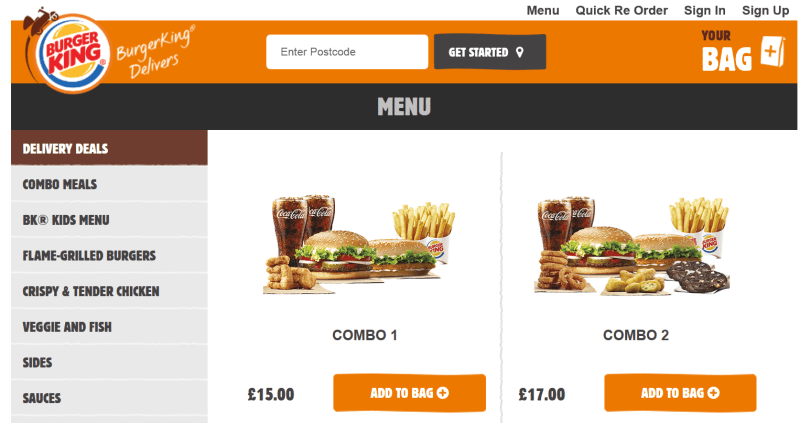 This isn’t the first time a fast-food giant has launched a delivery service in Europe, as McDonald’s previously tested such a service in Germany, with Cyprus becoming the first market to get deliveries permanently last year.

With the abundance of takeaway delivery services and aggregators now available online, including through smartphones and tablets, it’s perhaps surprising McDonald’s and Burger King have been so slow to leverage the potential for home deliveries in the Internet age. Last year, London-based GrubHub-style food delivery aggregator JustEat began trading on the London Stock Exchange, opening at a value of $2.45 billion. And just today, Uber revealed it was getting into food delivery in Europe too.

But we are starting to see the big global fast-food players succumb to the lure of technology, with both Burger King and McDonald’s offering mobile payment options in-store. Meanwhile, Taco Bell recently launched a mobile app that lets users order and pay on their smartphones, though it doesn’t offer home-deliveries yet — customers must still collect their food in-person.

McDonald’s has offered delivery services on a limited scale in the U.S. since the early 1990s, and today it has a handful of delivery outlets across Manhattan. Elsewhere, McDonald’s delivery service has proven particularly popular in parts of Asia and Latin America.

With “on-demand” food delivery a growing expectation among hungry Internet users, we can likely expect to see the big fast-food players increasingly turn to technology to ensure they don’t lose out to local takeaways.