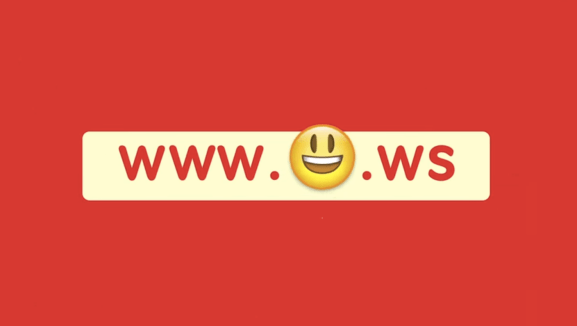 Coke in Puerto Rico has begun a promotion using emojis in Web addresses.

Coca-Cola has worked hard over the years to associate its brand with smiles. And now it’s going a step further: It has created a slew of Web addresses using emojis as domain names.

The promotion is a stunt by Coke’s Puerto Rican arm. According to Adweek, the soda behemoth has registered every single possible happy emoji on the .ws domain suffix. Emojis, of course, are the little graphics that convey all kinds of emotions and imagery. Many are forms of smiling or laughing faces. And if one is happy, Coke registered it.

You may not have known that it was possible to use an emoji in a domain name, but Coke obviously did. Every one of its emoji domains is redirected to a site, Emoticoke.com, where you can register to try to get your very own emoji address.

Savvy domain watchers will recognize that .ws is Samoa’s domain suffix. But DDB Puerto Rico, Coke’s ad agency, told Adweek that it used .ws because “Emojis are not accepted on domains such as .com, .net, and .org. After doing some research on domains that do accept emojis, we opted to go with the .ws because the letters could stand for ‘We smile,’ and hence seemed most relevant to the brand.”

Our own research suggests emojis have been used in domains as far back as 2011.

Of course, .ws could also stand for “we smirk,” “weight-gaining soda,” or any number of other things. So that seems like a stretch. Still, they had to go with something.