All games have bugs. In The Sims, some were left in to become features.

We asked senior producer Lyndsay Pearson to run down some of Electronic Arts’ developers’ favorite programming errors in the long-running life simulation game.

“There are definitely cases where we see things after the fact, unintended side effects of things we didn’t plan,” she said. Some are trashed immediately because they get in the way of gameplay. But others are intriguing, or funny, and if they work well enough, developers leave them in.

Take The Sims 3’s cheats that could, if used in a precise order, make curved structures like arches or curved walls, she said. “People were able to use them to craft these really cool, much more organic shapes. We never thought to try that. That was a case of seeing it after the fact.”

In many cases, they rely on the users who discover the bugs to help them figure out how they work. For the arched walls, there’s a whole series of videos that give you the instructions to make it happen, Pearson said. “We often have to do the homework ourselves to see, wow, how did they put that together. We build these amazing puzzle pieces, these crayons, and then we give them to people and they do things we never thought about.”

Some bugs, however, take developers a lot less work to discover. Here are some of Pearson and EA’s favorites — five that are still discoverable in-game, and two pretty darned funny ones that aren’t (for obvious reasons).

(We don’t have a picture of an outdoor ghost, so here’s a nice video of indoor ghosts for you.)

“That’s one of those cases where something emerged from the different part of the code that we didn’t think about,” Pearson said. Programmers had put outdoor clothing into The Sims, without thinking about how it might affect the game’s afterlife.

“A ghost went out the door and switched into a park and we were like, ‘What!’ ” she said, laughing. “That’s something where someone sends a screenshot to our internal list and everyone laughs. But then a developer said, ‘That’s funny, we should keep that.’ We liked it, so we decided to leave it as is.” 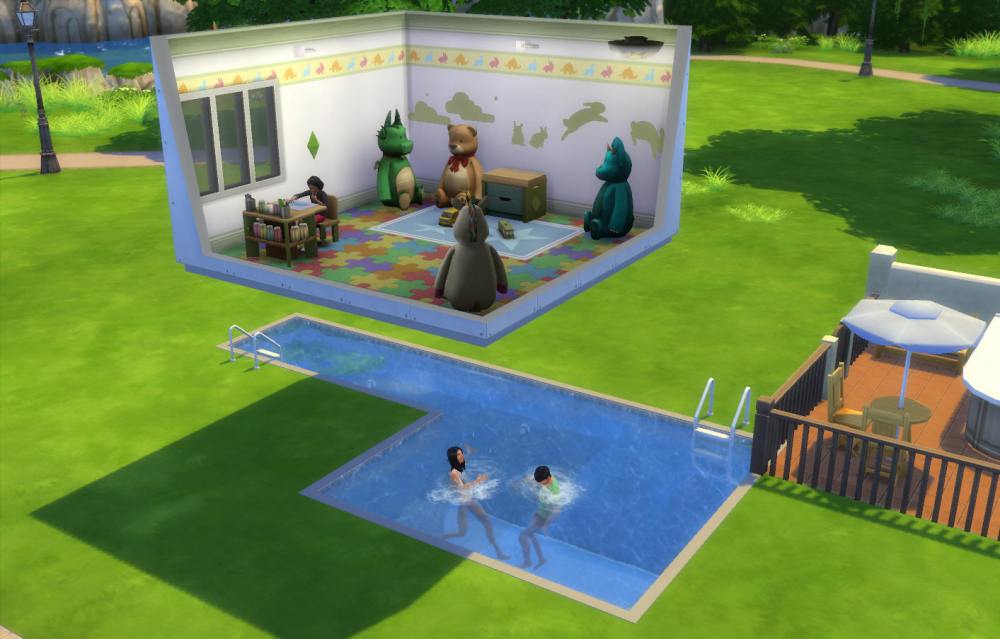 Above: Sims innocently play in a pool under a floating room in The Sims 4.

As The Sims gave more and more complicated tools to players to create structures, the programming rules to control how they worked became more rigid as well.

“We have all these rules for how things are supposed to work in Build, so you don’t end up in a strange situation where you’re on floor 1 and the game thinks you’re on floor 2,” Pearson said. But that didn’t stop players from discovering that, if you did certain steps in exactly the right order, you could create perfectly functional floating rooms.

“We saw it, and said, that’s not going to work really well,” she said. “But the more we played with it, the more we realized it was working pretty well. It was a neat outcome that we preferred to leave and share with fans.” 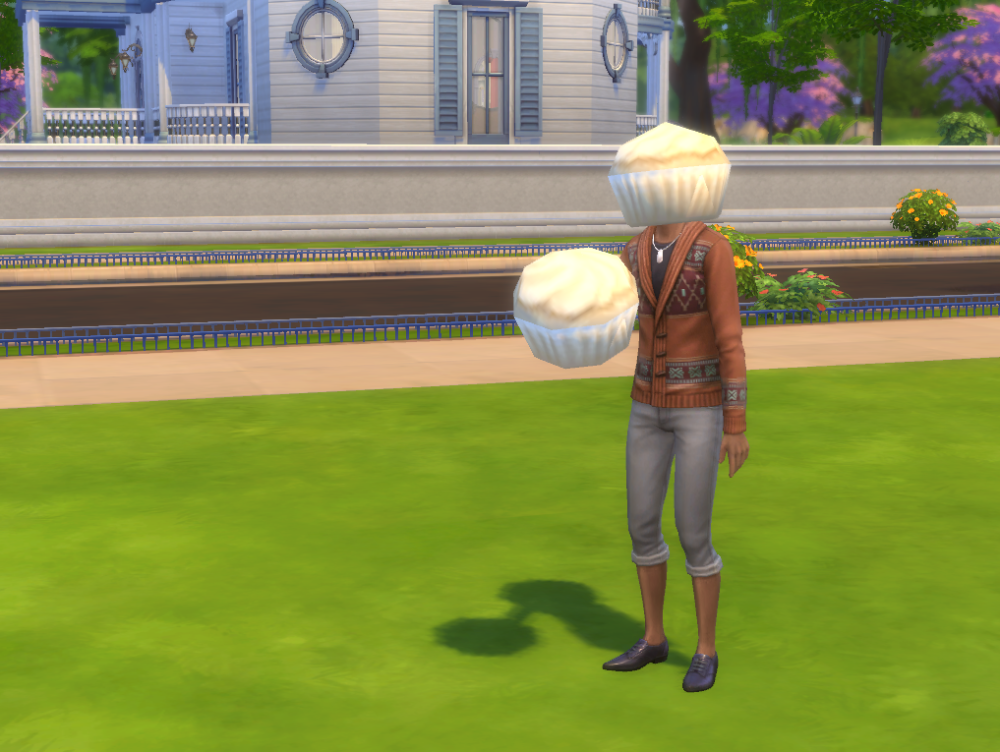 Above: Making your Sim’s head a giant cupcake wasn’t originally supposed to be a game option, for some reason.

The ability to plop ridiculous objects on your Sim’s head wasn’t really a bug; it was a joke, slipped into the game by a programmer for his own amusement. The size of the objects isn’t limited, so it can get pretty ridiculous: You can create what looks like a dinosaur, stomping around town, or a giant pirate ship in the bathtub.

“We were having so much fun with it,” Pearson said. Players were putting all kinds of things on their Sims’ heads. “We didn’t put it out as an official cheat. Someone in our mod community found it. In one of our recent patches, we changed it so that players can easily add it.

“We knew it was a cheat, we knew they would do really silly things with it. It’s clearly a cheat, but they’re having a good time with it and telling funny stories.” 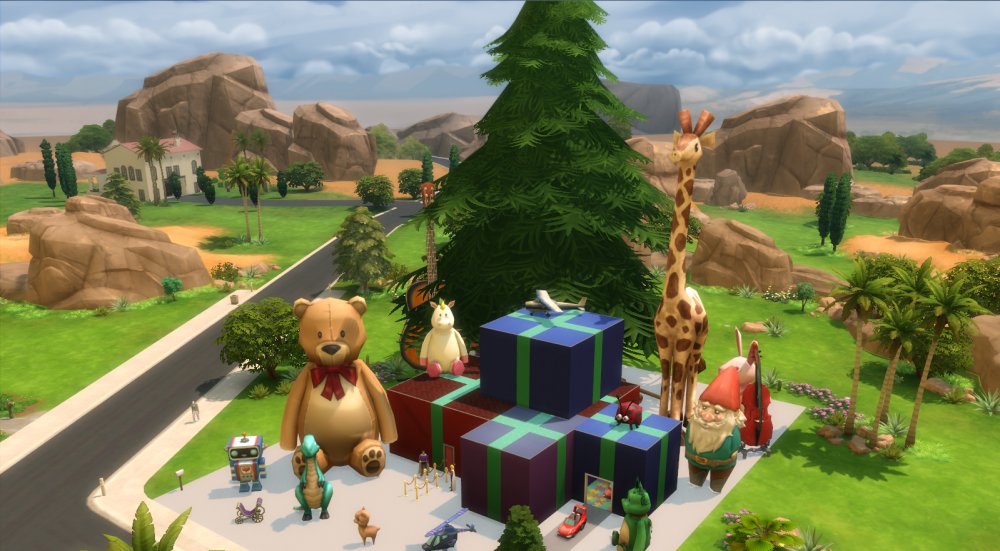 Above: These Sims really, really like Christmas. And extremely large things.

The hotkey to create larger versions of an object was an internal development tool that wasn’t really supposed to be part of the gameplay.

“When we were looking for things to build out our worlds, it was a practical tool to get variety,” Pearons said. “It was a debug cheat to be crafting spaces. It never got taken out, because we were like well, it doesn’t really hurt anything. We left it as, eh, maybe someone will find it.”

It wasn’t long before players were cheerfully making house-sized objects. In some cases, they used it to solve practical problems, Pearson said. Eventually, the team made it something gamers could save and share.

“I can’t afford the big TV, so I’ll make the tiny TV and make it giant! We enjoyed it, but we never really thought it would have caught on.” 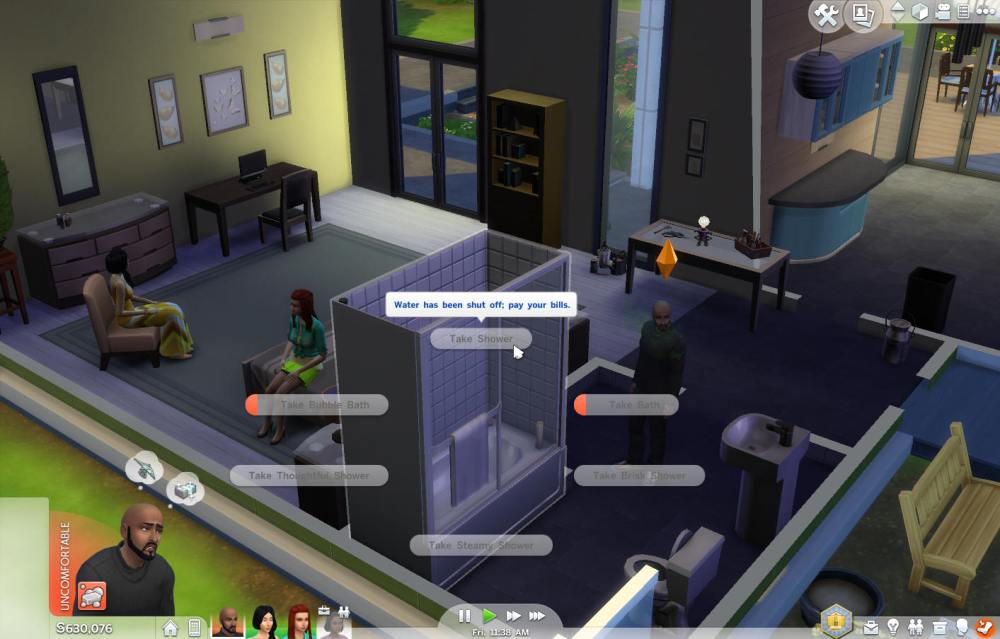 Above: Sorry, Sims, no power for you: Unpaid bills leave you in darkness.

In The Sims 2, developers first started joking about turning off the power or other utilities when players failed to pay their bills. They even experimented with programming it in, but it rapidly became too complicated, so they scrapped it in favor of the game’s traditional repo man.

But when The Sims 4 was in development, all that code had to be rewritten — and devs brought back the idea of Sims suddenly plunged into darkness.

“It was another sort of joke in the hallway,” Pearson said. “We tried it out and it was like, that works just fine.”

Another developer joke that became a popular feature in The Sims 3: chest hair.

Two major bugs that never made it to retail

Some bugs had to be fixed because they broke the game — but that didn’t stop developers from laughing their asses off.

“We see so many bugs in the development of these games,” Pearson said. “Some don’t make it to see the light of day, but they’re entertaining for us.”

The combination of gyms plus Sims who could grow old and die turned out to be horrible, and deadly, and hilarious.

“Elders have a chance to die from exertion if they’re too overworked,” Pearson said. “We had a gym, and at the gym, we advertise that the Sims should want to work out. These elders would show up on the game and they’d run on the treadmill, and they’d be like, ‘Oh I’m so tired,’ but the gym is like, ‘You should run more,’ and it created a deathtrap. They would all start dying.”

The best bugs happen when two different systems are created at once, and no one really knows how they’ll interact, Pearson said. Take the original Sims, which added pets, then dating in later expansion packs.

“It’s those intersections create a bunch of entertaining things,” she said. “We try to keep as many of the things in as possible that are funny.”

Hot Date added the ability to have blind dates. The only problem: the pets somehow became part of that system.

“For a brief amount of time, your blind date was occasionally a cat or a dog,” she said, laughing. “It was even worse because they thought they were a person. They’d float around next to you and sit at the table.”

To make matters worse, the interaction worked the other way around — one of the normal models thought it was an animal.

“One of the humans thought they were a cat,” she said. “They started running around with cat animations. Oh, it was horrible – they looked like a little monster.”