Image-hosting platform Imgur is rolling out some new features today designed to help users sift through the cacophony of content hosted on the site.

Founded in 2009, Imgur today claims 130 million unique visitors each month, with 1.5 million images uploaded every day. While it’s perhaps better known for its plethora of photos and animated GIFs, it’s also a community-based platform with discussions, votes, and comments forming part of the appeal.

With Topics in tow, Imgur now offers a number of broad categories, including “Funny,” “Storytime,” and “Design & Art.” Each image is required to have a Topic assigned to it when submitted to the gallery, while Imgur will also enable time-restricted Topics to mark special occasions, perhaps “elections” or “The Super Bowl.” 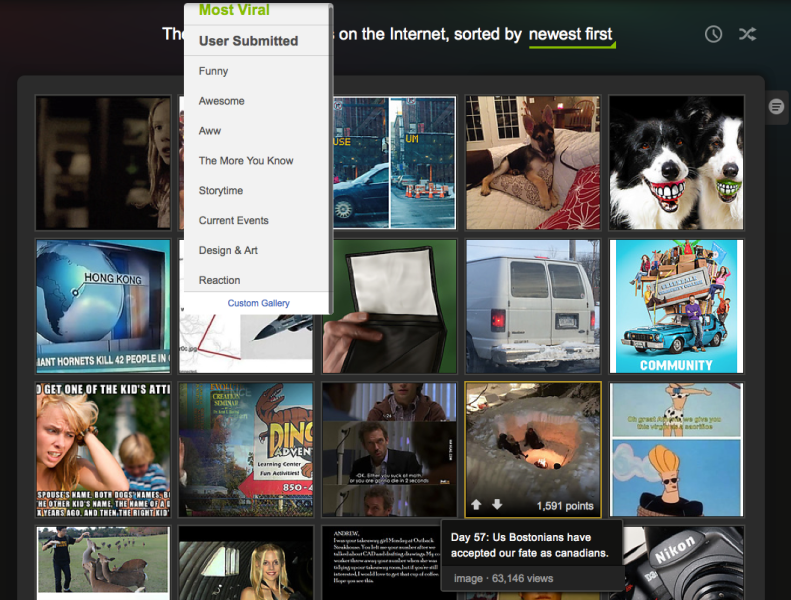 In addition to Topics, users will also now be able to assign optional user-generated tags, which are linked to one of the broader Topics. Imgur will serve up tag suggestions, but the uploader and Imgur community ultimately decide what the best tags are, with users able to “upvote” tags to determine which are used — examples could be “Cats,” “Camping,” “Soccer,” or anything relevant to the content.

Though it already had a tagging system in place, Imgur has made it easier to seek out the most popular ones, while simplifying the tag-creation process and allowing the public to vote on them.

This is all very well and good, but what does this mean for the millions of images already on the site? Well, Imgur will be automatically assigning Topics to content based on their existing tags, while users can add tags under the new system to older photos too.

Before these updates, users could search manually by keywords, or filter by “Most Viral” or “User-Submitted,” which could be further whittled down by “Popularity” or “Newest.” With the launch of Topics and an all-new tagging system, however, users can dig down and search for specific images within specific subject areas, similar to how Channels work on Vine. This also makes it easier for creators to organize their own images to maximize the chances of being found by those it would appeal to most.

Last April, Imgur raised $40 million to refocus its efforts and transform into a business that leans on native advertising, as well as launching new features, such as a new tool that launched last month to let you turn any online video clip into an animated GIF. But discovery underpins all this content, and that’s why Imgur is rolling out Topics today.