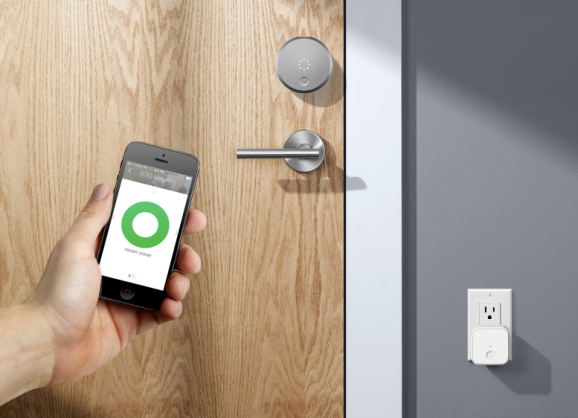 At my last house, the latch on the front door was faulty, and every now and then, if I closed the door but forgot to lock it, it blew open. Often, on my daily bus ride, I would sit and worry all the way to work that thanks to that bad latch, my cats had escaped and gotten run over.

Fortunately, I pretty much always locked the door, even if in my pre-caffeine haze, I rarely remembered doing so. And the cats are still fine, if you’re wondering. But when I moved to my current house, I brought that worry with me. And for nearly the first two years there, I tried every day to say “door locked” out loud when I left in the morning, as speaking the words would help me remember that I’d done it and assure me that the cats would make it through the day.

I don’t have to do that anymore. In fact, I don’t even need to pull out my keys when I leave the house. For the past week or so, the keys have stayed in my backpack all day long, including when I get home. That small but life-changing difference is thanks to the August Smart Lock, which I can control from nearby with my iPhone, and the new August Connect, which, with Wi-Fi connectivity, extends that control to me wherever I go.

Testing the lock and Connect

Although the $249 smart lock has been on the market since October, I only installed it earlier this month. Talking about it at work, I heard lots of skepticism. But I had plenty of reasons why the lock made sense: I could control it with my phone, I could give access to anyone I wanted and at any time I wanted, and the lock would even open automatically when I walked up to my front door. And if the smart lock totally fails for some reason, you can still open your door with your keys.

The difference between using August’s lock without Connect and with it is subtle. Without it, you can only control the lock from up close, as it uses Bluetooth to communicate with the mobile app. That’s for both security reasons — no access over the Internet — and battery life.

With the $50 Connect, on the other hand, you can control the app over the Internet, as it’s a separate Wi-Fi-enabled device that serves as a bridge between the lock and the app. Although this precludes the “no Internet, so there’s no security risk” argument for the smart lock, August claims that even with Connect the security risks are low because it doesn’t associate individual locks with users’ physical addresses — and also because it has worked hard to make sure it’s secure enough to satisfy consumers who are trusting the safety of their homes to August.

Although August initially marketed its lock specifically as not being connected to the Internet, it clearly came around to the idea that there are some advantages to letting you access the system from afar.

For example, if someone who needs to get into your house shows up at your front door without a smartphone — in other words, without being able to use the August app — they can call you and you can open the door remotely. The same goes for your spouse, who may have accidentally left her or his phone at home when going to the store. But we don’t talk about that.

Sold on the concept

After a week or so, I have a few thoughts on the lock, and on the Connect add-on.

First, while I think August’s smart lock has a few small user experience kinks it will have to work out over time, I am sold on the concept.

Second, I don’t ever want to have to go back to using keys to get in and out of my house.

I like to go on 15- or 20-mile hikes, and often when I get home I am so tired that digging in my backpack for my keys, where I usually stash them while on the trails, is exhausting. Now, when I walk up to the front door, the lock recognizes that my phone has come in range and automatically unlocks itself. It sounds like a small thing, but imagine coming home with an armful of groceries and having to go fumbling around for your keys. Now imagine not having to dig for them. That feels like real progress.

The same goes for leaving the house. The system has an auto-lock feature that you can program via the app, and that means that I can open the lock with my hand — by physically turning its housing — and then it will automatically lock the door 30 seconds later. Or a minute later, or after whatever timeframe you want. That means I can simply close the door and walk away. I don’t have to use my keys and then remember to say “door locked” anymore.

I haven’t had the real-world opportunity yet to remotely unlock the door when, say, my mother shows up needing to get in to feed the cats. But I have tested the Connect feature, and I think it’s great. It means that even if I leave my phone somewhere and have locked my keys in the house, if I can find a way to get in touch with my wife, she can open the door for me no matter where I am. Plus, if I felt like it, I could sit on the bus and unlock and lock the front door to my heart’s content. I won’t comment on whether I’ve done that or not.

Although the smart lock was designed by famed industrial designer Yves Behar, I think future iterations should be a bit more attractive. The current model looks bulky and monolithic. My wife doesn’t think it looks great, nor did another female friend of mine who’s in the market for a smart lock. And as my wife pointed out, it’s a bit wide for someone with a small hand, making it slightly uncomfortable to turn the housing.

Also, I had a few problems with consistent connectivity. Sometimes it took the mobile app ten seconds or more to recognize the lock, while other times it took four or less. And it’s clear that the auto-unlock feature, which requires you to leave a “geofence” of about 200 meters from your home before it will work, would be useful if you’re bringing a bunch of things in from the car, or working in the yard, and you have the auto-lock feature enabled. There’s no way to do that right now, which I think is a user experience problem they’ll have to address in the future.

All in all, though, I think August is really onto something, and it’s hard to imagine ever going back to a traditional lock and keys.