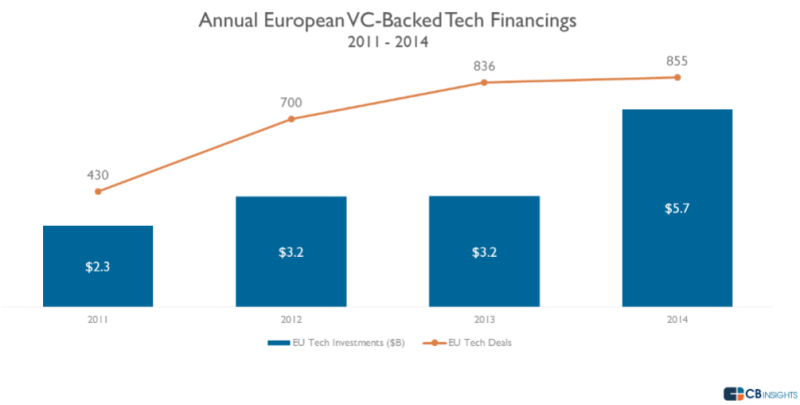 What’s perhaps most notable here is that while the actual number of deals didn’t grow all that much between 2013 and 2014, the dollar amount invested rose considerably. Part of this could be explained by a handful of particularly big deals, with each quarter seeing at least $1 billion raised, from which at least one was a $100 million-plus deal.

For example, German tech companies saw year-on-year (YoY) VC investments more than double to $1.2 billion. This was largely down to Delivery Hero’s bumper 2014, which saw it raise $520 million across several rounds of funding, and just for a little extra WOW, another $568 million was invested just a couple of weeks ago. The number of deals that closed in Germany only grew from 147 in 2013 to 154 last year, so this helps illustrate that the size of the rounds were markedly bigger.

There is one little quirk in the data here — for some reason, Scotland has been separated out from the United Kingdom, so it’s not clear whether that data is also included in the U.K.’s number. The figure for Scotland is small in comparison ($29.9 million), so it won’t impact things that much anyway, but if the report really is to treat the so-called “home nations” as separate entities, then presumably the “United Kingdom” should be referred to here as “England.”

Above: Tech deals in Europe

In terms of forward-looking trends, Italy could be one to watch, as it saw deals grow by 208 percent, and no other nation in Europe has seen as much growth over the past two years. Switzerland and Finland also feature prominently in terms of growth.

The CB Insights report only looks at inward investments, but to look at the bigger picture and gain a clearer perspective of the state-of-play in Europe, it’s worth looking at some of the acquisitions that took place.

Indeed, Europe also saw a huge number of acquisitions from the big guns in the U.S., with Apple buying Semetric in the U.K. and Prss in the Netherlands.

So, Europe’s tech economy is seemingly in rude health, with VC firms and tech behemoths from the U.S. taking significant interest in what’s happening across the continent.

The CB Insights report is available to peruse in full now.