When Nintendo has a weird idea for a game, it usually tests it on Kirby.

From pinball to minigolf, the pink guy has starred in some interesting experiments. One of the best was Kirby: Canvas Curse, one of the Nintendo DS’s first great games when it came out back in 2005. It lets the player use touchscreen controls to control Kirby by drawing lines that he’d roll along.

Conveniently, Nintendo’s newest console, the Wii U, also has a touchscreen. So, Canvas Curse gets a sequel in Kirby in the Rainbow Curse, which is out now. It’s certainly familiar to anyone who played the original, but multiplayer options and clay-based graphics help it stand out (although fans of Canvas Curse will also notice a few things missing). 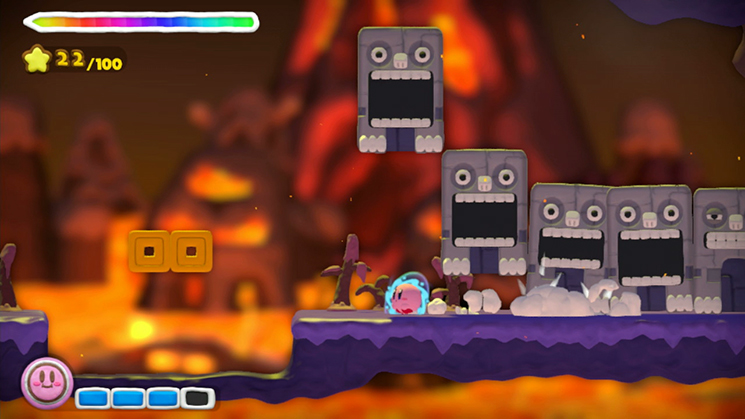 Above: Tone it down a bit, guys. We all know you want to smash Kirby.

A touchscreen platformer that works

Have you tried playing a classic platformer like Sonic the Hedgehog on a touchscreen? It’s kind of awful. You just don’t have the precision you need for all those tricky jumps when you’re swiping glass instead of touching buttons. Rainbow Curse, however, gets it right.

You barely have any control over Kirby. Instead, you can draw lines for him to roll along. You can also touch him to make dash forward a bit, which will also damage any enemies he touches. The concepts are simple, but its works perfectly.

Some levels introduce gimmicks that add a little variety. Kirby can transform into a tank, a submarine, or a rocket, each with its own abilities and touchscreen controls. 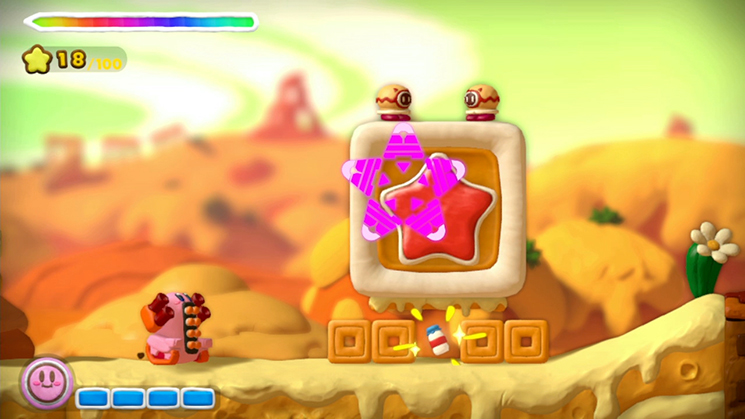 Above: Tank Kirby isn’t messing around.

Kirby is already pretty stinkin’ cute, but the clay-based art style makes Rainbow Curse as beautiful as it is adorable. Honestly, I used to make my own Kirby figures out of clay (hey, he was a pretty easy character to make), and the results on the screen here look a lot like something an artsy child might come up with. You can see fingerprints and smudges detailed on every surface. Sort of like with Epic Yarn, this visual trick is one of the games most memorable aspects.

Also, while we’re talking about aesthetics, the music deserves a special mention. The songs include new arrangements of classic Kirby tracks and original compositions, and they all perfectly fit each level, ranging from fanciful to epic.

Rainbow Curse actually supports four players. While only one person controls Kirby, three others play as Waddle Dees using Wii remotes or the Pro Controller. For them, Rainbow Curse is more like a regular platformer. They move with the analog stick of D-pad and attack enemies with a spear. And they can glide along any of the paths the Kirby player creates with the touchscreen. They also pick Kirby up and throw him, which can help with some of the trickier platforming sections.

It’s not as much fun as being Kirby, and its clear that the Waddle Dees are demoted to sidekicks. Think playing as Tails in Sonic 2. Sure, you can help, but the game continues on just fine without you if you die or leave. Still, it is neat to have people playing the same game in different ways. 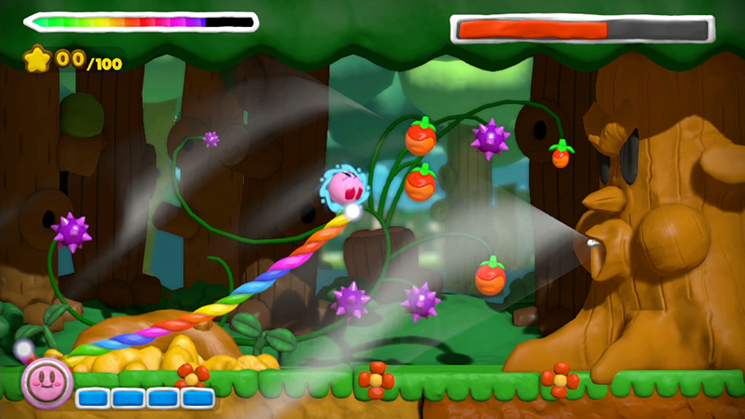 Above: He rolls the line.

It’s not a total cake walk

Kirby games have a (mostly deserved) reputation for being too easy. Rainbow Curse, however, actually has a decent difficulty curve. You’ll likely die during some of the trickier sections, and you only have four bars of health (although plenty of items scattered about will give you some energy back).

Bosses can also prove challenging. None of them feel cheap. In fact, they’re all pretty fun. But they do require some pretty precise navigation.

Like I said, the bosses are fun, but Rainbow Curse recycles most of them. The game has seven worlds. The final boss is unique, but the first three bosses show up again for the next three worlds. Yeah, they’re a bit harder and have some differences, but it still feels a bit lazy. 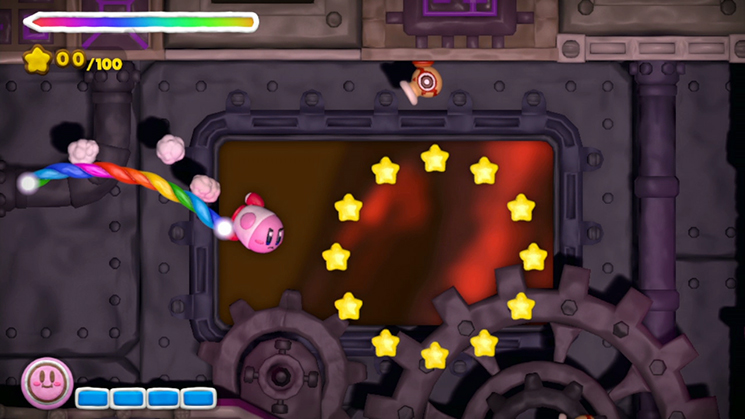 Above: And I think it’s gonna be a long long time.

I don’t think that Rainbow Curse had to take every feature from its predecessor, but I am sad to see some things gone. Notably, Canvas Curse let you copy abilities from enemies, just like Kirby does in most of his platformers. You’ll find none of that here.

Also, Canvas Curse let you manipulate levels with the touchscreen just as much as Kirby. You’d be tapping switches and dazing enemies all while trying to keep Kirby alive. In Rainbow Curse, you can pretty much only manipulate Kirby.

Rainbow Curse is another successful Kirby oddity. While it lost some of Canvas Curse’s features, it makes up for it with a fanciful, clay-based art style. The multiplayer is also a nice touch. It’s also nice to see a Wii U game that actually uses the GamePad’s features, something that’s becoming a rarity.

Basically, if you were a fan of Canvas Curse, there’s no reason to think you won’t enjoy this sequel. A little bit of the uniqueness is gone, but this is still a fun twist on the traditional sidescroller.

Nintendo provided GamesBeat with a copy of the game and a King Dedede Amiibo for the purposes of this review. Kirby and the Rainbow Curse is out now for Wii U.