Game publisher Nintendo is known for Mario and Zelda, but it’s also gaining a reputation as a serial under-supplier of its retail goods.

These days, it’s a bad idea to wait around if you’re interested in something with the Nintendo label on it. A number of the company’s hottest products are difficult to find in stores or online. Others are impossible to get anywhere except on eBay — and then only if you’re willing to pay a premium price. It’s easy to look at this situation and assume Nintendo is leaving money on the table, and it probably is. And this is a company that cannot afford to leave money on the table: It has struggled in recent years thanks to a Wii U that is not selling well. It scraped its way to a profit over the last two quarters, but Nintendo still needs ever dollar it can get its hands on.

But Nintendo probably has its reasons, and we’ll get into those. But first, let’s take a quick look at some of the items that people are struggling to find in stores.

The day the New 3DS XL went up for preorder, the Majora’s Mask themed version sold out almost immediately. If you didn’t decide to buy one right then, you’re out of luck. GamesBeat reached out to Nintendo about possibly restocking this (and the other items in this article), and we’ll update this post if we get a statement from the company.

But it’s not just the Majora’s Mask version that has sold out now. Every version of the New 3DS XL — including the Monster Hunter-themed handheld and the plain red and black systems — are sold out online. The same is true if you go looking in stores.

In remarks made to investors, Nintendo president and chief executive officer Satoru Iwata explained that the company sold more than 300,000 New 3DS XLs in the U.S. and Europe over its launch weekend. 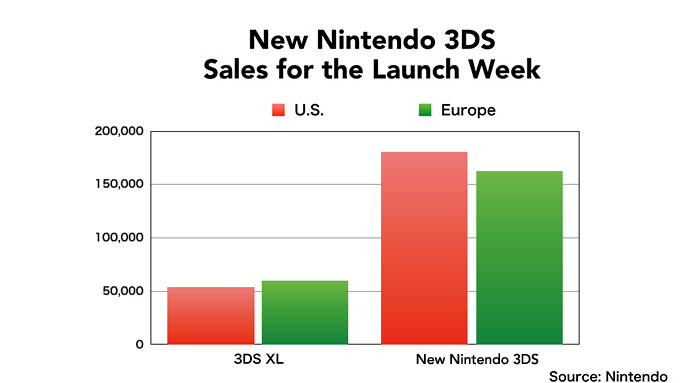 “At the end of last year, some video game enthusiasts who actively gather information on video games, held off on buying Nintendo 3DS hardware in anticipation of the New Nintendo 3DS launch,” said Iwata. “Thanks to these consumers and some highly anticipated titles being released simultaneously, we had a good launch despite it not being the usual sales season. Our next challenge is to keep this sales momentum.”

At the end of last year, Nintendo fans who jumped at the idea of interactive toys learned that the company did not plan to restock certain Amiibos. At that time, it was just Wii Fit Trainer, Animal Crossing Villager, and Marth that were especially hard to find.

Now, those three are impossible to come by — and more characters have joined the ranks of “rare Amiibo.” Captain Falcon, Little Mac, Pit, Sheik, and Rosalina are all nearly or completely sold out.

The worst part for collectors is that Nintendo is not specifying which figures it plans to do second or third runs for. This means that many people are rushing out to buy every Amiibo they can find the second they go on sale. That’s over $500 worth of little plastic characters.

Of course, this is probably a good thing for Nintendo. The company revealed earlier this month that it sold 5.7 million Amiibos since launching them in November.

Amiibos weren’t the only hot item that went on sale when Nintendo launched Super Smash Bros. for Wii U. The company also introduced the Wii U GameCube Controller Adapter that hooks up the GameCube joypad to the much newer Wii U console.

This is an item Nintendo targeted at Smash Bros. megafans who have played the series almost exclusively with a GameCube controller since the early 2000s. But this didn’t stop the publisher from underestimating demand.

This gizmo sold out very quickly after it went on sale. Prices for it skyrocketed about $100 on eBay. When it does go back in stock — which is rarely — retailers like GameStop bundle it with other items to maximize their sales. Third-party peripheral makers from Asia have even started releasing unofficial knockoffs that claim to work the same way.

Nintendo can’t even keep its latest 3DS games fully in stock. To be fair to the company, it is only publishing Monster Hunter 4 Ultimate in Europe, but it’s hard to find in the U.S. as well as across the Atlantic. Majora’s Mask is also running into supply shortages — although it’s easier to find than some of the other products listed above.

Why is this happening?

You would think this would all equal bad business for Nintendo. If you have a customer who wants to buy something from you, but you don’t have enough to sell them one, that’s just money you don’t collect. Right? Maybe, but IDC research director Lewis Ward doesn’t think Nintendo is sweating most of this stuff too much.

“I don’t think Nintendo views it as a bad thing that certain items sell out,” he said. “I’ve sat down with several Nintendo executives over the years who’ve said in passing that this or that is currently sold out, and they say it with a twinkle in their eye rather than with contrition.”

When we asked another analyst, Wedbush Securities Michael Pachter, he simply said he has “no clue” why Nintendo’s items sell out. Other analysts declined the opportunity to comment.

Iwata himself actually addressed this issue in some recent remarks to investors.

“We had already shipped 5.7 million Amiibo units worldwide by the end of last year,” he said. “Amiibos are performing especially well in the U.S., Canada, and Australia. Some figures are sold out and are being sold at online auctions at premium prices — something which none of us had predicted.”

So it’s clear that the company did not predict the demand — at least for that particular line of products.

But Nintendo has a history of having its biggest items sell out. In the early years of the Wii, that system was impossible to find for months and months. People had to wait in line every Tuesday morning after deliveries just for a small chance of getting it. Preorder backlogs where hundreds of names long. And Nintendo was pretty proud of that.

“In the heyday of the Wii and DS, I think more of the sold-out systems and games were genuinely due to an underestimation of demand coupled with the occasional manufacturing and supply chain hiccups,” said Ward. “In 2014 and 2015, I suspect that Nintendo is simply trying to minimize the slack in its supply chain.”

This is potentially a ripple effect of Nintendo’s struggle to make a profit during its current fiscal year. Making stuff costs money, but what really hurts a bottom line is storing unsold inventory in warehouses. The less time each item sits in a warehouse before Nintendo sells it to a retailer or online buyer, the more money the manufacturer makes from that sale.

So Nintendo is in a bind of wanting to sufficiently meet demand without ending up with a backroom filled with unsold Wii Fit Trainer Amiibos.

Another factor is also causing issues for Nintendo, and it is one that is out of its control. Late in 2014, the crane operators that load and unload shipping containers at West Coast ports went on strike. Analysts predict this could shave as much as 1 percent off of the U.S. gross-domestic product. Iwata acknowledged that it is also causing some delays in restocking items like the New 3DS XL and some Amiibos — although that doesn’t fully explain why it hasn’t announced any plans to make more items that are sold out in every territory.

“I don’t think Nintendo purposefully lowballs sales — leaving customers and retailers unhappy and money on the table,” said Ward. “I think they’re doing their best to model demand and it just so happens that there are surprises here and there.

“It’s part of managing the books as carefully as possible in a challenging competitive environment. But I don’t think they mind being sold out at retail every now and then since it does create ‘free’ media buzz.”

Hopefully, that buzz will convince the company to ship some more Majora’s Mask-themed New 3DS XLs, because I really want one.