Last weekend saw the U.S. release of Nintendo’s latest handheld console, the New 3DS XL, and it does two things. First, it includes a faster processor, a little nub that can function as the second analog stick that fans and developers have been asking for since the original 3DS launched in 2011, and it provides a wider viewing angle for its centerpiece 3D graphics.

Secondly, it continues the developer’s tradition of iterating on its hardware to correct previous models’ shortcomings. To be fair, Sony and Microsoft have also done this, with the former redesigning its PlayStation Portable handheld three times and the latter creating a new Xbox 360 that promised to be immune to the dreaded “Red Ring of Death” hardware failure that plagued early models.

But neither of them has anything on Nintendo’s 25 years of iteration on its portables. Here’s a brief history of the company’s hardware flaws and subsequent corrections. 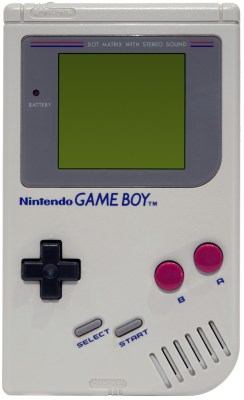 Above: The original is still one of the best. Especially because you could play Tetris on it.

The original Game Boy was amazing. I’d grown up with crappy Tiger Electronics handhelds, so the idea that I could play real games with animations and levels and such pretty much changed my life. It was kind of clunky and had its famous pea soup-colored graphics, but it was a start. And I played so much Tetris on that thing that it ultimately didn’t matter what color the blocks were.

Still, Nintendo knew it could do better, and so we got:

The green screen remained on this updated model, but it was smaller and lighter. But the original Pocket inexplicably eliminated the Power indicator of the original, so the second version (released in 1997) restored this function.

Despite these tweaks, however, a major flaw remained: You couldn’t really see the screen in low light. I had a peripheral for that first console called the Game Light that slid on the top to put a little illuminated frame over the screen, but other companies thought they’d solve every problem simultaneously.

Check out the Handy Boy by STD, which includes a light, a screen magnifier, stereo speakers, and extensions for both your directional pad and buttons. It also came with a shoulder strap, presumably because you’d need a little help holding that thing up while you were playing it.

But that’s not to say that I didn’t want the hell out of it. 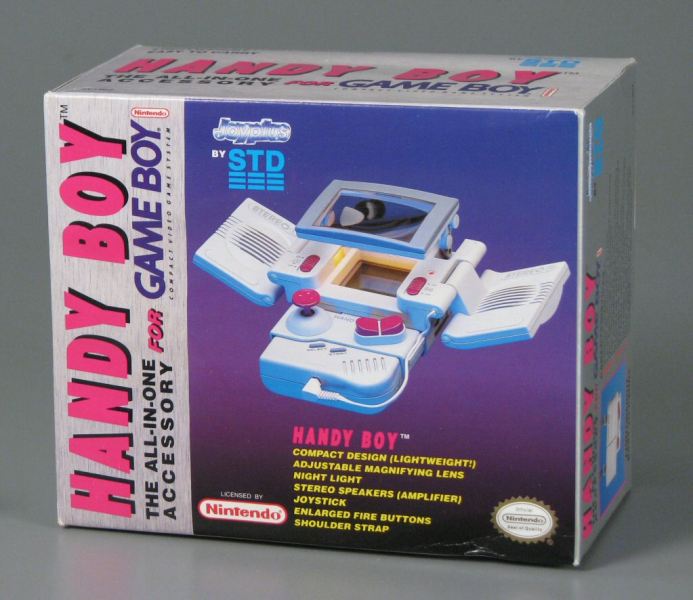 Above: Look — this is what passed for “awesome” when I was a kid. 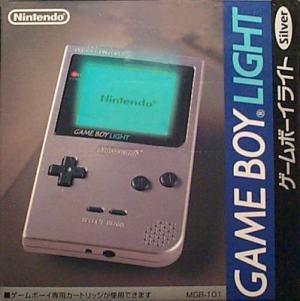 Nintendo saw the demand for a backlit screen, and it acted … by releasing a lighted version of the Game Boy Pocket exclusively in Japan. So that was pretty cool for importers and Japanese folks, but the rest of the world had to wait another six months.

Finally, the new generation of Game Boy appeared. And it still didn’t light up, damn it. But it did finally bring color (other than green) to portable Nintendo gaming along with a processor that was about as powerful as the original Famicom/Nintendo Entertainment System from 1985. But you could easily take it with you, so that was way better.

The Game Boy Color also played just about every Game Boy cartridge ever made, so it launched with a library big enough to almost make up for the fact that you kinda needed to shine a flashlight on it to see.

And so the time of the original portable came to an end, but Nintendo still had plenty to do. Thus, we entered the era of the Advance.

Above: This is also where the “Is that the only color you have?” incidents began.

The Game Boy Advance was a beast. It was bigger, faster, button-ier, and more see-through than any Game Boy released up to that point. OK, so you could also see through the Game Boy Color’s case, but the Advance just had more to see under there. Chips and stuff. Where the graphics come from.

And what else did the Advance have in common with its predecessors? You still couldn’t see the damned screen unless you played it inside the Well-Lit Room from the end of Alan Wake.

Above: Alright. Now you can play Mario Kart.

The Advance also had a fairly awkward shape that wasn’t likely to fit into too many pockets, so it was the first portable system that kind of demanded you save some space in your backpack.

Two years later, Nintendo released the Game Boy Advance SP, an update so dramatic that it was hard to tell that the two GBAs were even related.

The SP was small, and it folded up into an adorable little square that you could carry around with ease. It was also the first Game Boy that came with an internal rechargeable battery and, finally, a front-lit screen. A later, smaller update swapped in a backlight, but I’m not sure any of the early adopters complained too much about the added visibility.

Above: The awesome SP (right) and the less-so Game Boy Advance (images not to scale).

You know what they probably did complain about, though? The fact that the SP did not have a standard headphone jack in it, and you had to buy a proprietary adapter from Nintendo to get your earbuds to work.

The third GBA — and the final thing called “Game Boy” — is more of a footnote than anything else, neither addressing nor introducing any significant design issues. It remains the smallest handheld the company has ever made, with a design slightly smaller than an iPhone, and it did not have the backward compatibility with original Game Boy cartridges that the earlier GBAs had.

It was just kind of this cool little thing that happened, and then we moved on. 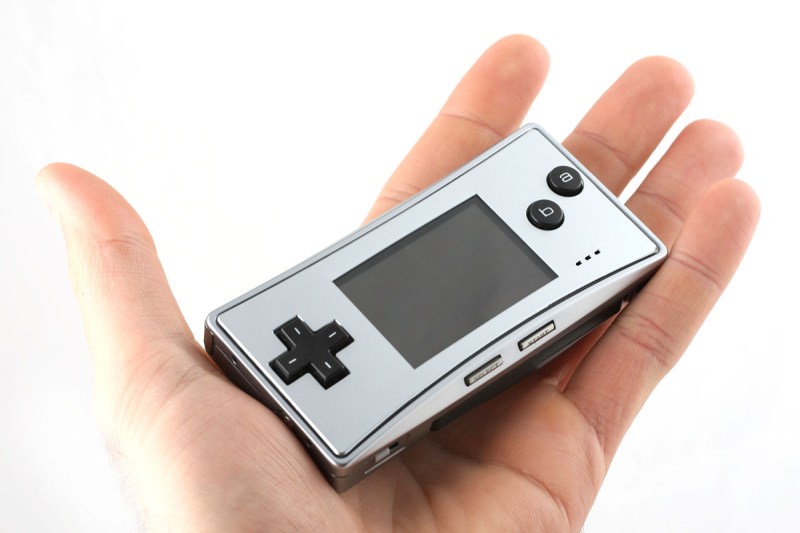