Aaru’s Awakening is as beautiful as it is deadly. It’s the cliché lady spy of video games.

The tricky platformer, which is out on Feb. 24 for PC, Mac, and Linux (with PlayStation 4 and Vita versions forthcoming) features gorgeous visuals, an epic storyline, and a few basic mechanics that the developer remixes constantly in order to find new and exciting ways to kill you. It’s the kind of game that reminds you how many times you died during a level and then assures you that you can do better. 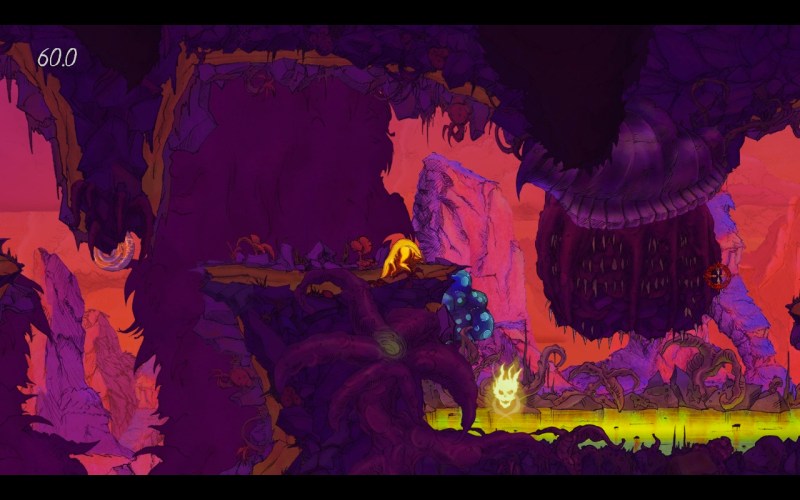 Above: The vapor coming off of the acid pits forms the shape of an evil face. So you know it’s bad.

It’s one of the prettiest games you’ve ever seen

I know hyperbole is bad, but it’s justified here because Aaru’s Awakening is beautiful.

Developer Lumenox has created a look simultaneously dark and colorful, welcoming and intriguing, and bristling with danger. Most of the world is either covered in spikes or full of deadly acid, but the visual style is so effective that you can’t turn away.

All of the art in the game is hand-drawn, and the animations are incredibly smooth and full of personality. It feels like an interactive film by animator Ralph Bakshi (Wizards, the upcoming Last Days of Coney Island), and in the brief moments that you can stop trying not to die and look around, you’ll see how much charm the game artists have crammed in there.

In the second set of levels, you’ll meet some tentacled snail … things that Aaru uses as mobile platforms. And while it was absolutely not necessary to do so, the developer gave them walking and turning animations that communicate not only life, but a little bit of personality.

The game is full of little touches like that, and it’s an incredible accomplishment. 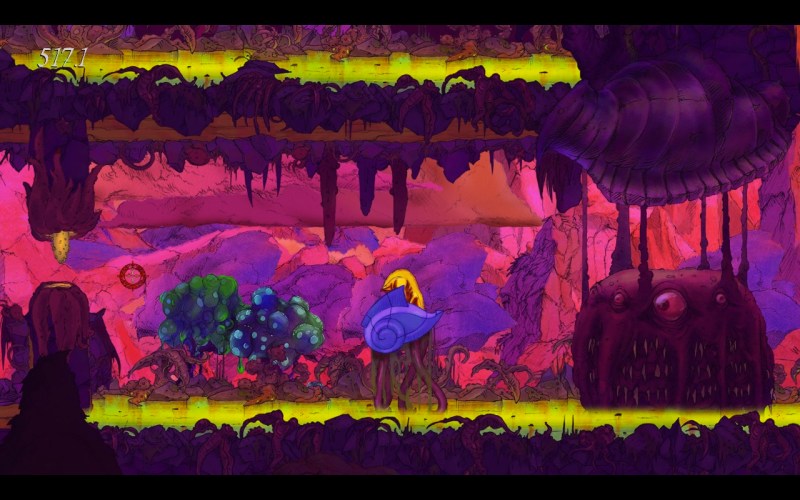 Above: If I had to give a voice to Platform Snail, it would probably sound like Eeyore from Winnie the Pooh.

The concept is interesting and just ridiculous enough.

Four powerful beings once fought for control of Earth, but they reached a truce in which they would agree to a time-share situation with one ruling while the other three slept or whatever. Those entities are Dawn, Day, Dusk, and Night, and everything was going fine until Night decided to go all rogue, which you would kind of expect because his name doesn’t fit the whole “starting with D” theme the other three have going. Plus, I’ve learned from Dying Light that night is just the worst.

Anyway, Dawn catches on and sends his servant Aaru to go take care of that little problem of Night killing everyone and taking over. And that’s the game, give or take a plot wrinkle or two.

In order to get from his home in Dawn’s realm to the domain of Night, however, Aaru has to pass through both Day and Dusk’s homes.

What this means for you, players, is that you have four distinct regions to go through, each with its own visual themes and colors. It’s a cool spin on the time-worn “themed level” trope of platformers, but it’s especially cool here because the changing scenery helps tell the story. 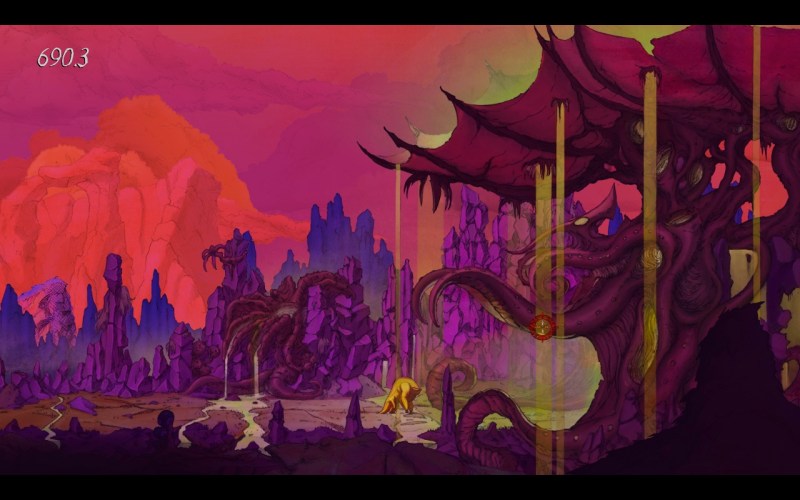 Above: Dusk is also ocean-themed. Tentacles for days folks.

It is incredibly challenging, but it’s also fair.

Every time I messed up while playing this game — and it did happen, a lot — I knew it was my fault. I couldn’t blame the camera or the controls; it was just my own stupid reflexes and lack of planning. And while the game is tough as hell at times, everything always feels doable.

It accomplishes this by giving you a simple suite of maneuvers and then letting all of the challenge come from the environment. You’ll mostly be teleporting by aiming with your mouse and shooting a small ball using the left button (you can charge it up to shoot farther by holding the button). Right-clicking will instantly teleport Aaru to wherever the ball is. You can also dash with the space bar, and you can aim these either with your cursor or by just having Aaru dash in the direction he’s moving.

You also have to manage combat, but here’s the elegant solution: You destroy enemies by teleporting on top of them, so everything you do depends on combining those few basic mechanics of aim/charge, fire, and dash.

But like I said, the game will kill you a lot because it’s all about how well you learn to use those moves. It gets a little trial-and-error at times, and that may be divisive, but it’s all worth the effort. And if you’re really hardcore, the game also includes leaderboards if you want to compare your completion times with the rest of the players. It’s often a pretty serious game.

It would be nice to look around sometimes

This is a very, very minor issue, but Aaru’s Awakening occasionally suffers from 2D myopia. What I mean is that sometimes in order to plan, you’ll need to be able to see something that is just barely off of your monitor. And you know that Aaru can see it, but he’s always in the middle of the screen, so it may not be visible to you.

I don’t want to be able to look around every level all willy-nilly, but I might have saved a few deaths if I’d been able to pan over slightly. The fixed camera is as much a part of the tradition as the differently themed levels, but I encountered just enough blind spots to hope for a slight exception this time.

While it won’t ever hold your hand, Aaru’s Awakening will impress you with its simple mechanics, gorgeous art, and challenging (but fair) gameplay. The difficulty might scare a few players off, but the game remains at least a must-see even if you don’t play it all the way through.

Aaru’s Awakening is out February 24 for PC, Mac, and Linux. The developer provided GamesBeat with a free Mac download code for this review.