Flex Logix Technologies is coming out of stealth today to announce a novel plan that could make designing complex logic chips much easier. This plan earned the company a round of funding from Lux Capital — and a prestigious design award.

Mountain View, California-based Flex Logix creates cores for field programmable gate arrays (FPGAs) that allow a chip to change its identity, even after it has been shipped. A chip startup can use Flex Logix cores to set itself apart through intellectual property (IP) designs, a growing part of the $335 billion-plus chip industry and a strategy that has been pursued by successful IP companies such as ARM, Imagination Technologies, and Rambus.

“Our goal is to be in billions of chips later this decade,” said Geoff Tate, chief executive of Flex Logix and former CEO of Rambus, in an interview with VentureBeat. “We give people a way to change their silicon (chips) without changing their silicon.”

Not just masking the pain

Chip makers have a very expensive problem. If they screw up a chip design, they can’t always fix it after the chip ships. So they have to design a new “mask,” or circuit pattern, at a cost of $2 million to $5 million, to fix bugs. That can result in delays that take three months or longer to fix. That, in turn, leads to product delays and millions of dollars in lost revenue. And for the chips that shipped with bugs, manufacturers have to deal with costly returns. This is why stand-alone FPGAs, which consist of identical logic blocks connected through an intricate network, are a $5 billion market already.

Normally, if engineers want to design a system to be upgradeable with software in the field, they put in chips known as FPGAs. But those chips can be large, expensive, slow, and power inefficient. By contrast, Flex Logix enables chip designers to plan ahead for flexibility by using a Flex Logix core. They can design the core to handle as many processing tasks at once as they want. Then they include it in their designs for larger custom chips. They can then program the software for the Flex Logix core, even after the chip ships. So they can use that part of the chip to handle bug fixes or updated standards specifications.

And it runs faster because it is located inside the custom chip, rather than on a separate chip. That gives it access to much faster bandwidth.

Networking is the key

As the company also announced today, cofounders Cheng C. Wang and Fang-Li Yuan, with University of California at Los Angeles professor of electrical engineering Dejan Markovic, have received a prestigious engineering award for a paper that described the EFLX technology. The founders are getting the Lewis Award for Outstanding Paper at the International Solid State Circuits Conference (ISSCC), a big chip design conference this week in San Francisco.

Tate said that the underlying network for EFLX is much faster and more efficient than the networks for stand-alone FPGA chips. That network is the subject of Wang’s award-winning engineering paper, as the network results in a reduction of interconnection circuitry by 50 percent. That leads to much lower costs, Wang said.

“Flex Logix has the potential to dramatically reshape the semiconductor industry,” said Peter Hebert, cofounder and managing partner of Lux Capital. “Adaptable silicon is a really big idea — and we’re proud to be behind Geoff and his team as they bring their breakthrough to market. If we’re successful, billions of new integrated chips will be based on Flex Logix’s innovative EFLX technology.” 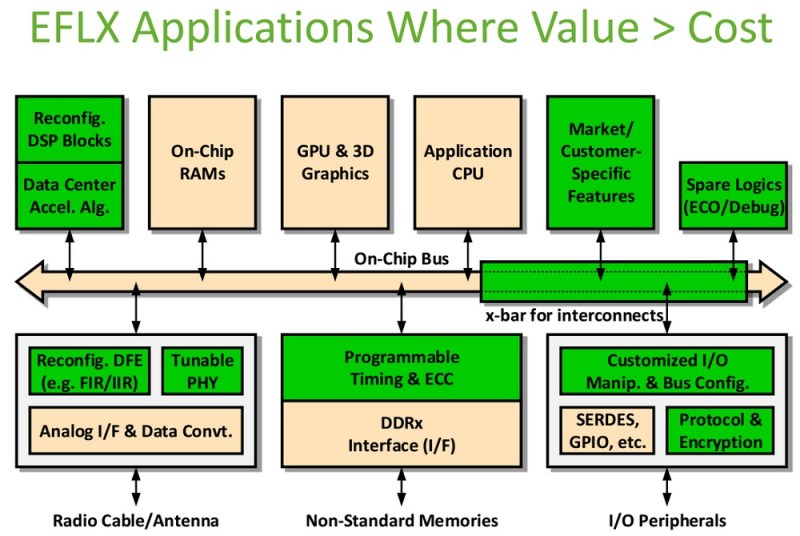 Above: Flex Logix potential applications are in green.

Richard Wawrzyniak, an analyst at market researcher Semico Research, was briefed on Flex Logix. He said that many early attempts to do something similar failed.

“Could the market use this technology? Absolutely — as long as expectations of what the technology is asked to do are not too ‘over the top’,” Wawrzyniak said in an email. “It would seem like the Flex Logix approach is reasonable and within the right application and device parameters, I don’t see a reason why it would not work.”

He added, “However, we need to see this in operation in some parts before anyone is going to know if it truly operates the right way. This will take a bit of time. I can say that if it operates as advertised, then I can see multiple companies and applications being very interested in this technology.”

Making the best of both worlds

Customers are expressing a lot of interest, Tate said, because Flex Logix is fusing two different kinds of chips that are hard to mix. Custom chips are designed to be extremely efficient, with logic designs and other components that are set in stone. Microprocessors and FPGAs are programmable, but they aren’t as efficient as pure custom designs. By adding Flex Logix’s integrated EFLX cores, chip manufacturers can get low cost, low power, faster processing, and flexibility — all at the same time. That reduces the risk and design time for chips, Tate said.

EFLX is a fully functional FPGA that can be integrated into communications chips, microcontrollers, and a lot of other devices. It can be used to update input-output protocols, change encryption algorithms to improve security, enable elements of software-defined radio, or accelerate data center algorithms such as search, Tate said. Makers of products in aerospace, medical, automotive, and other hardware industries could benefit from having more flexibility, Tate said.

One of the core functions on an FPGA is a look-up table, or LUT. Flex Logix has designed or will design three basic types of EFLX cores, one with about 100 LUTs, another with 2,500 LUTs, and still another with 10,000. The customer simply chooses the precise number of LUTs they need and then creates the core. So the EFLX FPGA cores can fit into chips for Internet of Things or microcontroller applications that cost less than a dollar, or high-end custom chips that sell for hundreds of dollars. Flex Logix believes that its cores, including licensing fees, will add less than 15 cents to the manufacturing cost of a chip.

“We have potential customers that are interested in using us in all sorts of places on the chip,” Tate said. “Our technology will continue to get better over time.” 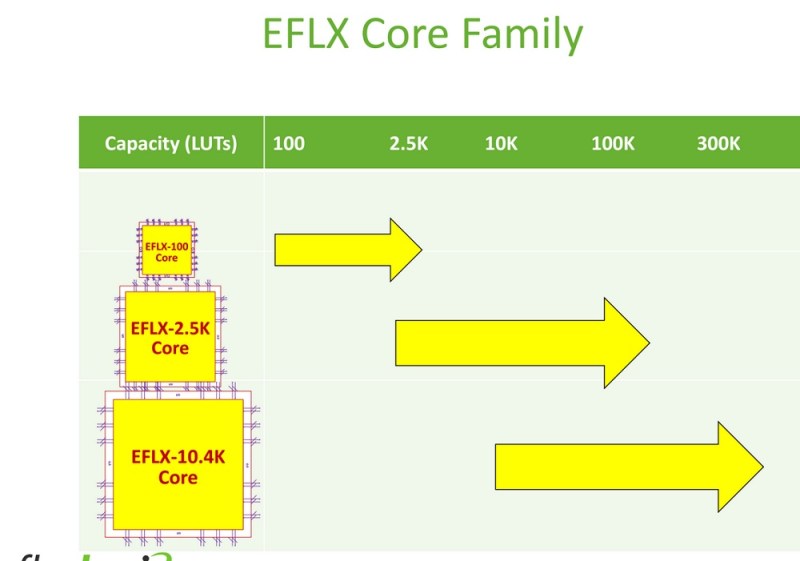 Above: Flex Logix takes a flexible approach to FPGAs.

The remarkable thing is that Flex Logix has been able to get pretty far with just four people — Tate, Wang (vice president of engineering), Yuan (principal hardware designer), and their technical advisor, Markovic, who is still a full-time professor at UCLA. Wang and Yuan worked on the fundamental tech for years as students at UCLA.

“We are keeping our burn rate low,” Tate said. “We are fine in terms of cash.”

One reason why is that Flex Logix creates designs that it hands over to larger engineering teams, which combine the IP with their own designs to create functioning chips. The process of engineering a full chip and manufacturing it is the really expensive part.

“We decided quickly that building a chip ourselves did not make sense,” Tate said. “We thought that everything else is going into system-on-chips, so why not FPGAs? We found potential customers who were interested.”

Learning from the past

Tate had a lot of experience with controversial IP at Rambus, which he ran for 15 years and finally left in 2006. Memory chip makers tried to avoid Rambus’ patents on memory chip interfaces, which were critical parts of their main memory chips. That led to a ton of legal troubles and years of angst in the chip market.

“This is more like ARM,” which didn’t go on memory chips and didn’t have a lot of legal troubles, Tate said.

Rivals include Xilinx and Altera, as well as Intel, which has talked about putting FPGA cores on logic devices.

Flex Logix hasn’t announced any customers yet, but it is fully engaged with licensing its designs right now, Tate said. The company has applied for numerous patents.

Will it be as big as ARM, which has built a market capitalization of $24 billion after decades of licensing?

“ARM took 25 years to get there,” Tate said. “We are more like ARM than a niche because we can be used in so many categories. We have a potential to get into markets with $82 billion in revenue.” 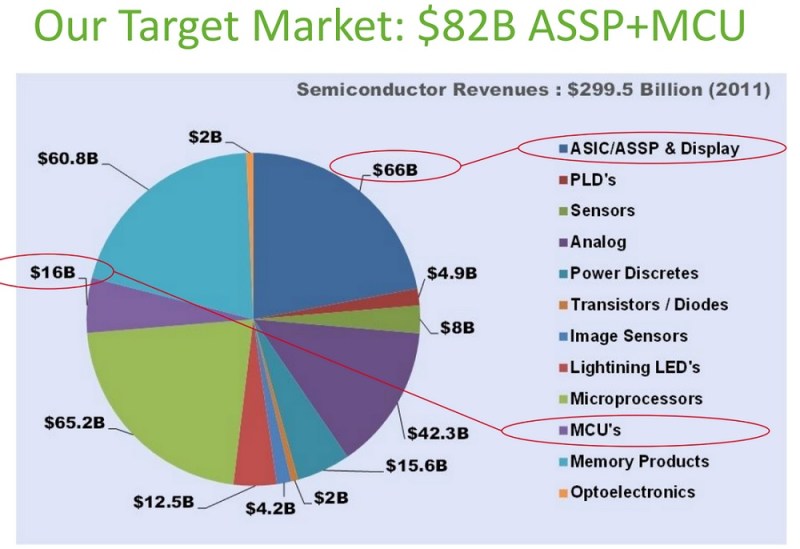