GamesBeat: How are you feeling about brands right now?

Sheppard: A lot of people are doing smart things with licensing. Licenses are a great addition to the portfolio. Certain companies have strengths with respect to licensing.

I’m not someone who likes to do what everyone is doing. I joined Kabam and everyone asked me why. I joined Gree for a reason. I think the market is moving toward licensed products in a way that’s not healthy. It’s not organic in the long term. I want to build a team that can create great original IP. There’s a great foundation for that here, something to build off from. It’s part of the reason why I do my best to surround the company with people who’ve been great in the industry before us, so that we can learn from them. 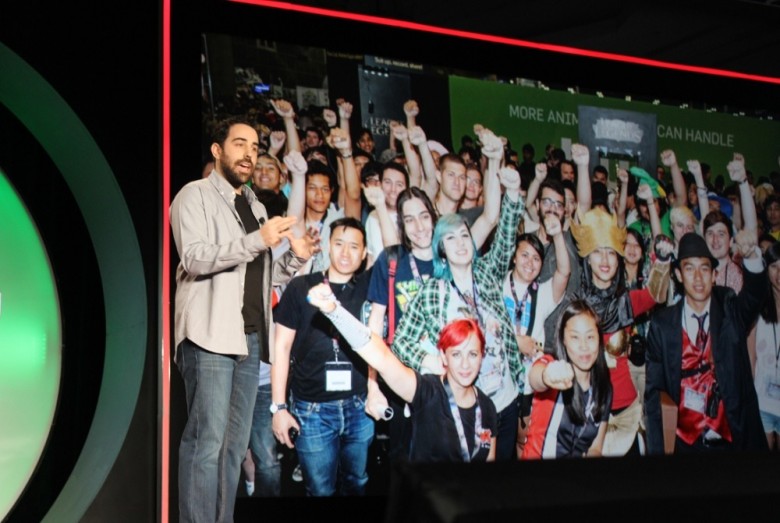 Above: Brandon Beck of Riot Games.

GamesBeat: I went to the Dice Summit and heard Brandon Beck from Riot Games talk about talent and how Wall Street doesn’t value it properly. Investing in your culture and your teams matters a lot. One of the points he made was that in his view, the team is more valuable than the franchise.

It’s the opposite of what you see at Activision. Bobby Kotick took Call of Duty from Infinity Ward and said, “This isn’t your franchise anymore. We’ll spread it across a bunch of studios.” The team that made Call of Duty was no longer the team running the franchise. It became an interesting bet. Call of Duty is now a billion-dollar game every year. It’s different from the craftsman sort of approach, where the team has most of the decision-making power. I wonder about that difference in philosophy.

Sheppard: It might reflect the fact that the audiences they’re crafting that message for are different. I’ll give you my honest answer to that, which is that I think it really depends. Ultimately the team is the most important thing, because if you don’t have the right team, you can’t build the right product. But at the same time, once you have the right product, you want to give the team flexibility to do what they want to do in the long term. That doesn’t necessarily mean keeping them on the product. Sometimes that does mean asking them to work on a product that’s a bit older.

The company has a responsibility to invest in its talent. That’s a huge luxury of operating at our scale. I do like the term “team” that Brandon uses. I’ve worked with people in the past who managed their teams like family. The reality is that most people’s families have a weird uncle that you don’t like, though. Similarly, you wouldn’t put Michael Jordan on the football field to play linebacker. The team as a unit, as opposed to a collection of individuals, if that’s what Brandon means I’d agree with him on that, recognizing that you want to give individuals choice. 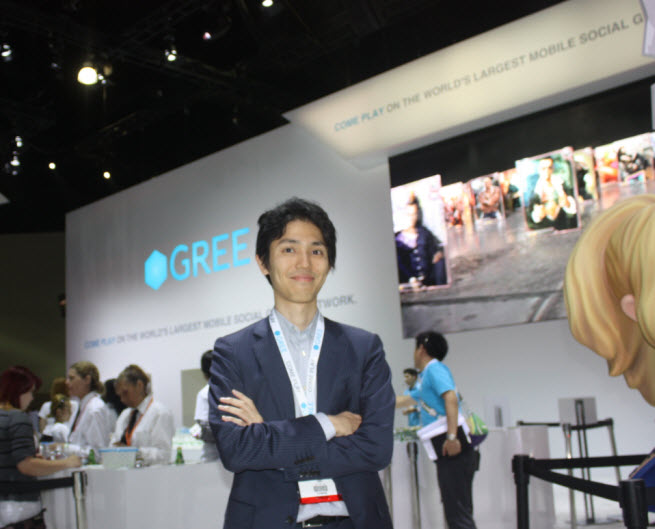 Above: In 2012, Gree took over the THQ booth at the E3 tradeshow. Gree’s Naoki Aoyagi stood in front of it.

GamesBeat: You have a big opportunity before you and a lot of resources. There’s no dictated path for what you have to do with those resources. You have a lot of choices ahead of you.

Sheppard: I’m very thankful for this. Naoki said, “It’s almost once in a decade that you’re presented with an opportunity like this, to join a company that’s as large as Gree, with a business as large and stable as it is here in the west, and then have the trust and support of leadership to drive it in a direction that makes sense. ”

Very few people say that externally, and a lot of the people who say it don’t mean it. I feel very lucky. This is my favorite job of all time. You don’t want to be small. You want to be big right now.

GamesBeat: What do you think of the situation among indie developers, who may have some romantic feeling about the need for indies, who want to stay independent?

Sheppard: I love indie games as a consumer. What I love about this market, more so than any other version of the market — except maybe PC — is that as an indie developer, you can make an amazing game. If you look at the Dice awards, you’re very often seeing games that are not made by big teams or big companies. That’s pretty impressive. It’s the industry acknowledging exceptional accomplishments in our craft of building games.

The market is lucky to have companies like Unity, to have all the various middleware providers out there providing analytics and UA capabilities. We have platforms like Apple and Google that care about supporting the indie community. There’s always going to be a large amount of innovation there. I don’t think that’s going away.

What’s happening to consumers — and I feel this as a game player — is that the quality of these games is going up and up, whether they’re indie games or professionally produced games.

There’s a challenge to protecting that part of the industry. For me, the indie community needs to be profitable to a degree where you can be a successful indie and produce multiple games. The stories that make me sad for the community are the indie developers who put their heart and soul into building a game and then aren’t able to recoup their investment in building that game. As an industry we need to do something for those people.

It’s going to change. It’s going to get harder for everyone. But I don’t think the indies will go away. Indies will get better. The people working at both ends of the spectrum will get better. I think you’ll find gameplay innovation on the indie side and franchise innovation at the head of the curve, if you will. You’ll have people redefining categories and genres, resetting our expectations for what great is.

GamesBeat: What do you see as far as the creation of new game studios and where that’s happening? It seems like a lot of San Francisco studios got started a while ago. There are more interesting things happening in places like Helsinki now.

Sheppard: We’re excited about how the global distribution capabilities of mobile have lead to a much more distributed and healthy global ecosystem of developers. Helsinki is the hotbed right now. Berlin is rocking as well. London is doing okay. San Francisco has kind of fallen off. If you look at our peer set in San Francisco, Gree International is the only office that’s really hiring and hiring with confidence.

There’s talent all around the world. When you choose a market, you have to throw yourself at it. We could do more there in terms of our Vancouver studio. But once you’re there, you’re fine. Every location has strengths and weaknesses. You just have to choose. Right now, people are shifting their focus to other markets. I’m pretty psyched to not be doing what everyone else is doing. 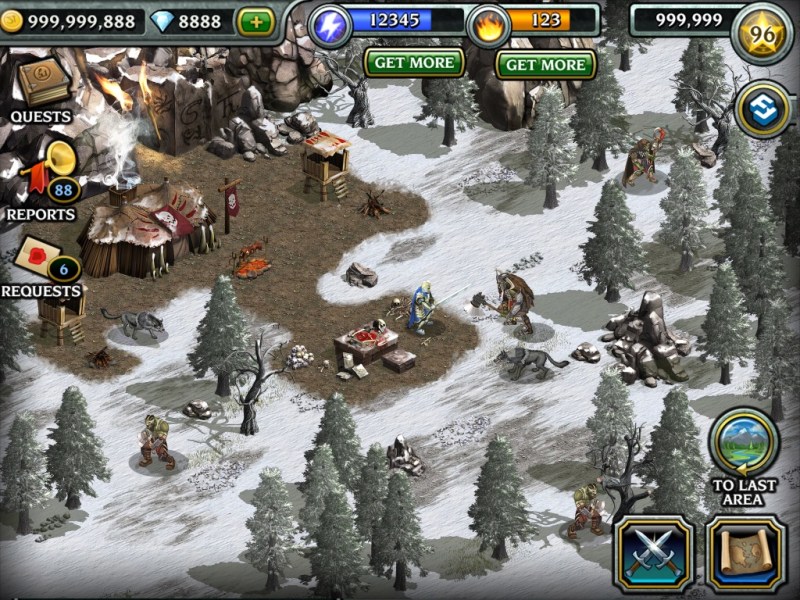 Above: Gree’s Dragon Realms for iOS and Android.

GamesBeat: Are there any other topics you wanted to comment on?

Sheppard: Because we haven’t been that vocal in this market, I did want to talk about the way that we’re going to grow in this coming year. Last time around we talked a lot about the things we had accomplished. This time I’m going to try to tell you what we’re going to do and then deliver that.

For Gree International this year, we’re focused on a few things. First and foremost, we’re building the team we want to have as the foundation to move us to the next level. In the background, you’ll see us start to move into Europe.

In the back half of the year, you’ll see us bringing a couple of games to market that are a step up in terms of quality of execution and gameplay compared to what Gree has produced in the past. This is a big step forward relative to where we’ve been — bigger screens, faster processors, faster GPUs. We’re going to move the quality of our games to that next level.

Importantly, with our RPG studio, we’re going to start on our next-gen game this March. It’s going to be a big project — all-in, high conviction. That’s going to take a bit more than a year to get done, but I’m looking forward to sharing our progress on that over time.