Uber is making moves to boost its security credentials today with the news that it’s partnering with Safetipin, a crowdsourced community service that collates safety-related data submitted by the public.

The company says it will look to “contribute to Safetipin’s data collection efforts” by training its own drivers to work in tandem with Safetipin’s auditors. Uber’s drivers will collect data at night using camera-enabled smartphones, which will be mounted to the exterior of their cars to capture photos of neighborhoods and roads.

Each snap will then be tagged based on nine key attributes to arrive at an overall safety score, including: lighting, visibility, openness, security, walk-path, and gender diversity.

This marks part of Uber’s bigger shift toward working on its reputation, after Uber was banned in Delhi, India following rape allegations made against a driver late last year. The woman in question is now suing the company in a U.S. court.

The fruits of this Safetipin partnership will first be seen in India’s New Delhi before arriving in “other global markets” later this year, including Bogotá, Colombia and Nairobi, Kenya. 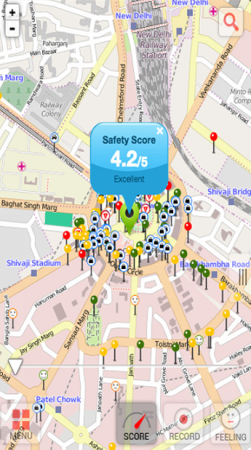 Safetipin is a map-based smartphone app that invites users to rank communities’ safety credentials and discuss all things “security” pertaining to their neighbourhoods. Safetipin itself launched in Delhi back in 2013, but it can be used anywhere in the world.

Users set up what are known as “Circles of Interest,” which typically would be a neighborhood, but could also be a university campus or place of work. Anyone can then post comments to these circles, which can include things like incidents, hazards, harassments, or even a “bad feeling.” Users can also upload photographs to supplement these comments.

This data is used to help promote safety for women and other groups. So-called “safety audits” are made available not only to the general public, but also to governments, NGOs, and other key stakeholders.

Uber says it will also work directly with governments and town planners to work on new projects based on this data, which may involve things like erecting new streetlights.

This latest initiative ties in with Uber’s other recent efforts, which include introducing a new “panic button” to the Uber mobile apps, re-verifying all drivers with the police, carrying out additional background screening, and letting passengers share their real-time location status with family and friends.

Elsewhere, Uber is also starting to partner with cities to help planners manage urban growth, including things like relieving traffic congestion. This kicked off in Boston back in January.

Uber has received a lot of bad press over the past few months, and it’s clear that this latest project is at least partly designed to counteract that. The company says the Safetipin pilot project will kick off on February 25 and will run for five months.