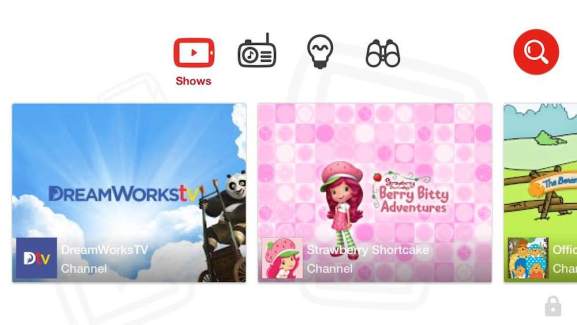 Google has its mitts into everything these days. But most of its products are aimed at adults, not children.

That’s changed with YouTube Kids, an Android and iOS app that takes out the clunkiest and nastiest parts of the video site (like the cesspool that’s the comments) and streamlines them for children. It also creates a tyke-friendly zone of sorts where programming appropriate for teens and adults doesn’t intrude.

But it doesn’t remove the one thing that I, as a parent, want to keep my kids from seeing: Ads.

Google’s business is built on ads, and this helped it pull in revenue of $14.61 billion in the fourth quarter of 2014. But Google’s aggregate paid-click growth is slowing — that’s not so good. And it also means that even a kids’ app isn’t going to be ad-free.

But after my first glance, I worry that YouTube Kids doesn’t do enough to shield children from ads and advertorial content.

On the third video I tapped — the first full-sized Sesame Street, by the way, that I brought up in the results for the show — I got an ad for HooplaKidz’s YouTube channel. While it wasn’t selling me a specific product, this was still an ad — it was promoting a channel on YouTube, and it was something I didn’t want my children seeing. I hadn’t vetted HooplaKidz. I’d never heard of it. Is it a source that offers truly educational material? Gratefully, an ad didn’t play in the middle of the video, but the same one did show up at the end.

When I ventured over to videos that weren’t PBS, I found ads again to be a problem. The first obvious commercial brand I found, Strawberry Shortcake, presented a slew of videos — the first being an ad for a free-to-play mobile game, not the show itself. How is that kids-safe?

I then went outside the app’s carousel of shows and went straight to search. My kids love an old Canadian TV series, Mighty Machines, which shows trucks, tractors, and other heavy equipment at work. Even I learn a great deal from the show about how these beasts operate to make roads and haul freight. But I hate how the YouTube search for Mighty Machines shows plenty of advertorials for toys and other kid products (and same with the related content — a real rabbit hole into a hell of what looks like paid content). I hoped that the YouTube Kids would block that.

The 10th suggested video for Mighty Machines, though, is a 5-minute look at a Play-Doh toy set. And, of course, that HooplaKidz ad played again when I selected it. Now, the video was marked “DisneyToysReview,” something a YouTuber uploaded. But the video tells me nothing about itself. How do I know, just from clicking on this video, that this person wasn’t paid to do a video on this product? It had no disclaimer. It shows the toys off, and at the end, it has no disclaimer as well — it amounts, essentially, to another ad for the YouTuber’s channel.

So, how is any of this better for children? I don’t get it.

Advertising is all around us. Ads are on my public transit commute. Ads are on the streets. They’re in our apps. They’re in our programs. When a company presents an app that it bills is appropriate for children, I expect that it will have some protections against ads and paid content.

YouTube Kids does not. It may protect your kids from bad words in YouTube comments or racy twerking videos, but it leaves them vulnerable to an even more insidious danger: Google’s tracking methods and advertising practices.