If you’re the HTC marketing and PR people today, you’re probably not very happy that the reveal of your biggest product of the year has been lost in a torrent of leaks.

The company expected to reveal its pretty new HTC One M9 phone at Mobile World Congress in Barcelona, but pictures of the new device are everywhere today. Good news for us.

This video (from @upleaks, although the Twitter account appears to have been removed) is the most recent, and perhaps most thorough, look at the new M9. Behold:

Now that every smartphone maker has produced and sold large phones, they now need a new killer feature upgrade to get people to leave their carrier contracts and buy a new phone.

I’m afraid that what we’ve seen of the M9 so far will not be enough to make most people change. The feature improvements of the new M9 shouldn’t come as much of a surprise. The ones seen in the video are table stakes for premium smartphones in 2015.

The first thing you notice about the M9 is the metal shell, which HTC describes as having a “two-tone metal finish.” In HTC’s best devices, the metal tones have always invited the eye.

The new phone, according to the video, gets a new 20-megapixel camera on the rear, which will soon be the norm in premium phones. The front camera also gets an upgrade for “better selfies in low light.”

A new HTC Sense Home widget places apps on the desktop dynamically, based on usage frequency or time of day. HTC Sense is a software overlay designed to add new interface features and run on top of stock Android. 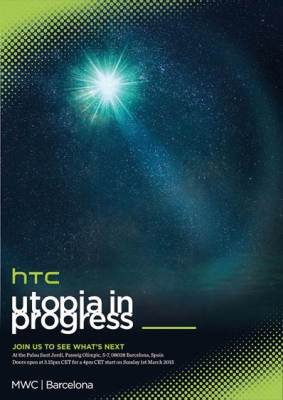 Above: HTC plans to formally announce the M9 at a March 1 event in Barcelona, Spain.

Another Sense feature, called BlinkFeed, gives you suggested food ideas based on the time of day, according to the video.

The new phone also has Dolby surround sound built in, and a louder speaker.

The video also hints at another new Sense feature called HTC Connect that apparently lets you three-finger swipe to stream music (and possibly video) to other audio/video hardware in the room.

Of course there are still a number of juicy details to find out about the new HTC M9, and we will be at HTC’s event in Barcelona to watch HTC’s marketing people talk about them.