The world now has more than 1 billion smartphones and tablets used for gaming around the world. This is the first time these devices have surpassed that milestone. And Google’s mobile operating system continues to benefit the most from the growth.

Android makes up nearly 75 percent of the the smart-device gaming market, according to a report from intelligence firms App Annie and IDC. From the fourth quarter of 2013 to same period last year, Google’s mobile platform grew 5.2 percent. That came at the cost of both iOS and the rest of the field. Apple’s smartphones and tablets lost 2.3 percent year-over-year, while all other mobile OSes lost 2.8 percent. Global revenues for mobile gaming reached $25 billion in 2014, and iOS and Android — which each take 30 percent cuts from game sales and in-app purchases — pocketed a significant chunk of that cash. 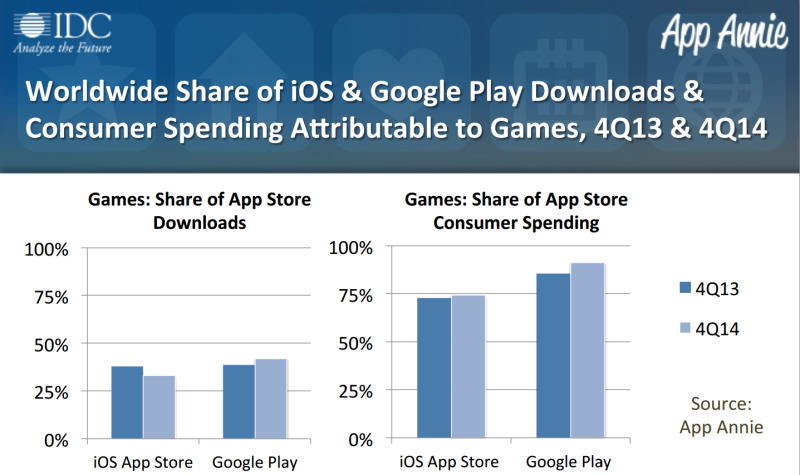 You can see the importance of gaming to each platform in the above chart. Games make up around 30 percent of all downloads on iOS. The Google Play store, meanwhile, sees around 40 percent of its downloads from games.

Spending, however, is where gaming really dominates. Nearly 75 percent of all spending on the iOS App Store comes from games, and that was essentially flat from Q4 2013 to Q4 2014. For Google Play, that number is closer to 85 percent, and that is up incrementally from the fourth quarter of 2013. This is all primarily from in-app purchases in games like Clash of Clans and Candy Crush Saga, both of which have made around $1 billion each over the last few years. 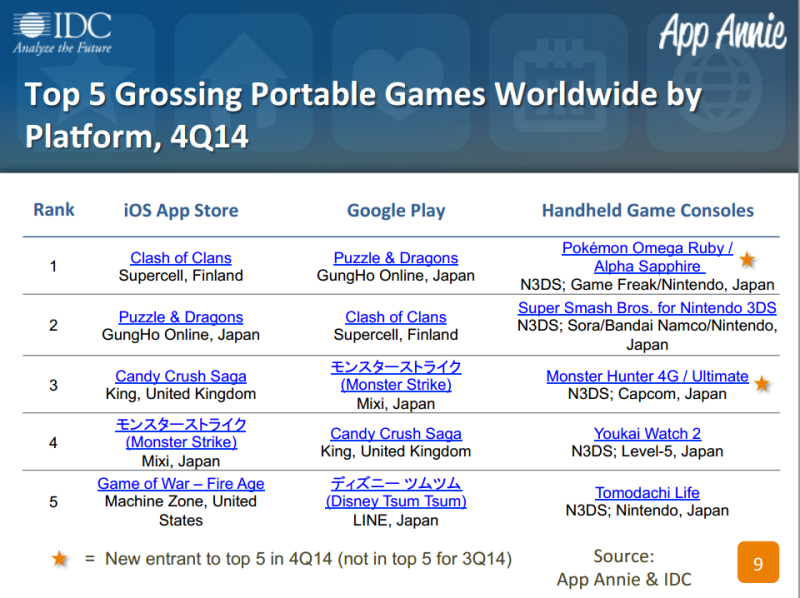 The top-grossing games on mobile platforms are almost exactly the same as the year before. Clash of Clans, Candy Crush Saga, Puzzle & Dragons, and Monster Strike are in the top five on both iOS and Android. All of these apps have dominated these charts for months now (and years, in the case of Candy Crush Saga, Puzzle & Dragons, and Clash of Clans).

But despite this stagnation, both Apple and Google continue to benefit from strong spending on games. And the developers responsible for the perennial hits have found different ways to attract new players and to squeeze more money from their existing base of gamers. So while other developers struggle to crack the top five on the highest-grossing chart, it’s not for a lack of quality new games — it’s just that the top apps are so adroit at keeping their momentum going.