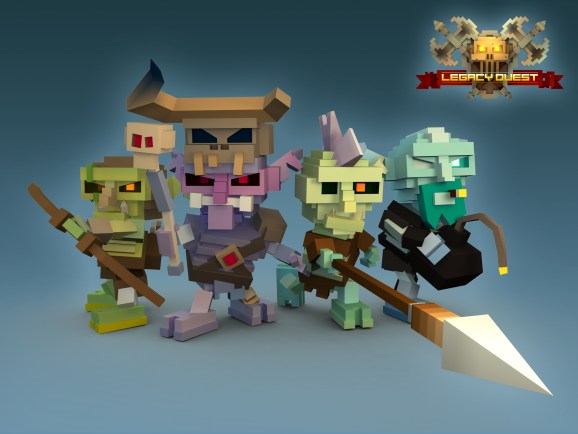 Legacy Quest, an action RPG from Socialspiel and Nexon M.

Nexon M’s and Socialspiel’s latest mobile game is anything but casual.

Legacy Quest is an action role-playing game with roguelike influences, developed by Austria-based Socialspeil, a team made of up ex-Rockstar Games developers. Its publisher is Nexon M, the mobile arm of Soeul-based online game giant Nexon, and it’s coming later this year on iOS and Android platforms for free, with an in-game currency available for purchase. This new release will add to Nexon M’s roster of free-to-play games, giving it access to a bigger piece of the $25 billion mobile games market.

Heroes explore dungeons and fight monsters for rare loot in Legacy Quest, which was inspired by popular action role-playing games but has some considerations built-in for mobile gaming.

“We are all pretty big fans of action-RPGs like Dark Souls, Diablo, and Torchlight,” said Socialspiel COO and chief game designer Helmut Hutterer in an interview. “The draw on these influences is there. Basically what we came up with is an action-RPG that plays a lot more arcade-y than most dungeon crawlers. It’s very much focused on high score and the competitive aspects.”

“A lot of our inspiration comes from Asian games like Dynasty Warriors,” says Baker. “The gameplay style is very arcade-like, skill-based. It’s not just hitting a button and attacking everyone. You do need to move around, slash, and react. Very much like Dynasty Warriors — that’s the kind of combat we have.”

Being an action game, Legacy Quest uses a virtual touchscreen directional pad and buttons for player input. It also supports Bluetooth controllers as well as the Nvidia Shield to accommodate those that prefer buttons.

Baker notes that Legacy Quest is accessible to everyone, but isn’t necessarily casual. It features multiple hero and weapon classes as well as various equippable skillsets. He says it’s “geared more toward your traditional RPG player” that may be looking for “something that’s a little bit more than a lot of the ARPGs we see now [on mobile].”

“We are geared more toward the mid- to hardcore kind of caliber of players,” Baker explains. “It is very easy to pick up, but difficult to master. There’s a lot of depth in the gameplay, not just in crafting but also in the movement and attacking, and in the overall strategies in the metagame.” Above: A hero takes on big, blocky monsters in Legacy Quest.

Like in other role-playing games, a hero becomes stronger through the collection of loot and the gaining of levels. But what happens when that hero dies? What’s unique in Legacy Quest is that player death is permanent, much like games in the roguelike subgenre.

“The original idea for Legacy Quest was that we kind of had this idea to try to make a permadeath game,” says Hutterer. “We liked the idea of permadeath and the interesting choices that the mechanics bring. But we wanted to make it more accessible and bring it to a mobile audience. That was the initial spark.”

The way to keep it accessible was to have players maintaining their progress after death. So, when a hero dies, another one from the same bloodline can take its place, and there’s the possibility of passing on traits to give it powers. Having the fallen hero passing on a legacy to the next generation of heroes was Socialspiel’s move to keep it approachable and engaging.

“It sounds pretty hardcore with the ability to lose your character, but you don’t really lose progress,” Hutterer explains. “You don’t play just one character, like in Diablo, for example. You have this whole house and family of heroes. They’re partly randomized in the way they’re created but you can also kind of influence them through certain choices you make in a talent tree. But each of these heroes is a unique person with a unique name, with specific traits and abilities which sort of point you in the right direction to, say, turn it into a powerful mage or more like a tank-type character.”

There is a way to cheat death, though. You can gather an in-game resource called Souls through exploring dungeons and fighting monsters. Souls can then be used to continue on with a hero after death.

“If a hero dies, you still have a chance to resurrect the hero and continue playing. The more the hero survives in the game, the more expensive it is to resurrect the hero,” Hutterer said. “So you have an interesting choice: do you start over with another character or do you keep going with the character you’ve played with for quite a while?”

While he wouldn’t divulge much beyond a hint, Hutterer did seem to let on that there may be away to bring back heroes that have died some time later.