First at Google, and then at Facebook, Amir Michael found out how hard it is to build and maintain the ultimate data center, where all infrastructure runs efficiently. Now Michael is launching Coolan — a startup with software that can help companies big and small track hardware performance, debug their gear faster, and make better buying decisions based on insights from the software.

In addition to launching, Coolan today is also revealing that it’s venture-backed. One year ago it raised a seed round of an undisclosed size. Investors include the Social + Capital Partnership, North Bridge Venture Partners, and Keshif Ventures.

Coolan’s software is meant to examine the connection between the overall data center as a macrocosm and the physical servers inside the data center as a microcosm. It’s something Facebook has sought to do in building out its sprawling data centers, and now Michael and a small group of engineers want to bring that integrated approach for analytics to the rest of the world.

But not only that. Coolan is also incorporating crowdsourced data into the tool, allowing companies to compare their data with that of their peers in an anonymized fashion. It’s a revolutionary concept, particularly for companies that aren’t as transparent or fast-moving as Facebook, but hey, if it ends up improving data center operations here and there, it just might become a widely accepted (and even imitated) practice.

Michael thinks this part of Coolan could create a community — sort of like the Open Compute Project, where Facebook has gotten several vendors and data center operators to collaborate on server, storage, and network hardware specifications.

“Now, at this point, we’re adding a lot of transparency into the industry,” Michael told VentureBeat in an interview.

The difference is that everyone will use the same common software, which will even be smart enough to predict certain hardware issues. And it could even determine the causes of hardware snags.

In the long term, admins can become more informed IT buyers, because they can determine which sorts of servers or even hard drives perform best using Coolan. That means decisions can be based on more than just cost, Michael said.

Companies can use Coolan as a web-based tool or integrate it into other software through Coolan’s application programming interface (API), Michael said. 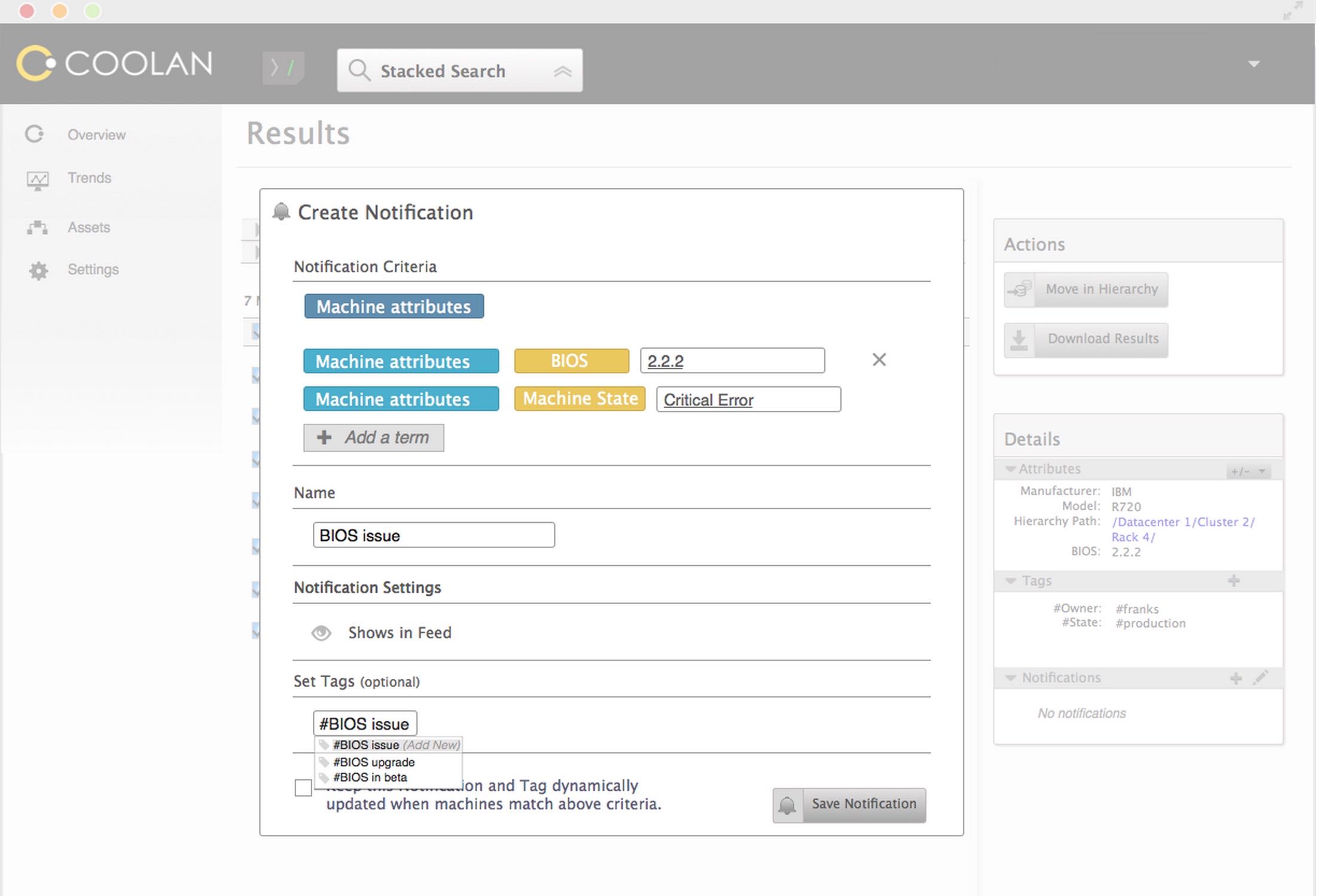 Above: With Coolan, admins can set configuration notifications so that they can get alerts whenever it appears that hardware gets configured incorrectly.

Michael started San Mateo, Calif.-based Coolan in 2013. Before that he spent four years at Facebook, including as its manager of hardware design, and almost six years at Google, where he was a hardware engineer.

Small and large companies alike have been trying out Coolan’s software, which is now in private beta. Meanwhile, Michael wants to bring on more employees, aiming to have 10 by the summertime.