This story is not just about a startup that wants to redefine its category.

This story is about a startup that wants to redefine its category — and become a model to spark the startup scene in the home country of its cofounders, Colombians Andrés Felipe Diaz and Carlos Saavedra.

The company, Themidgame, has just scored $120,000 from famed seed accelerator Y Combinator — and gained access to the accompanying ecosystem of contacts — so it can add human interaction to the management of influencers. Next month, it presents at the accelerator’s Demo Day.

Marketing with influencers — those YouTubers and bloggers who get paid to pitch products to their many followers — has become “very cold right now,” Diaz told me. Many platforms are highly automated, a process that he said “has scared brands in the past” because they didn’t really know who was pitching their product.

The new company, which has already conducted more than two dozen campaigns with over 200 influencers, wants to distinguish itself against such competitors as Izea, Twitter-owned Niche, Instabrand, and Tap Influence by helping brands create relationships with influencers, and by providing more direction about what kinds of influencer pitches succeed.

The pair started Themidgame in Colombia, and then came to California after they were accepted and seed-funded by Y Combinator.

As with other such platforms, Themidgame allows influencers to set up profiles about themselves. Via APIs, the platform then posts the influencer’s stats in each venue, such as number of followers on YouTube.

Usually, influencers then would begin matching themselves to opportunities posted by brands, making brief written pitches about how they will enthusiastically endorse a new shampoo, for instance.

Themidgame, however, requires an actual phone conversation and other communication between its staff and the influencer before the brand matchmaking take place.

“We filter and [screen] them,” Saavedra told me. “Not every profile is sent to the brand.” The platform’s admin dashboard allows filtering of applicants by, say, social channels, previously pitched products, or number of subscribers.

It is, in effect, a step back — towards the talent agency heritage of influencer platforms, when human-to-human identification, handling, and nurturing of talent was a key differentiator.

“All of our technology is built to facilitate that relationship,” Diaz told me, pointing to the ability of the brand to live-chat with the influencer through the platform.

Once vetted, the influencer is then matched with the brand. The influencer sets their own rate. Unlike some other platforms, the number of followers is not the main criteria.

“Some people with [a low number of] follows have high engagement,” Diaz said, referring to comments, likes, and shares.

Themidgame works with the brand to develop a creative strategy, and then lets the influencer create as they wish.

“Before, brands told influencers, ‘do exactly this,'” Diaz said. “We’re trying to leverage [their] storytelling powers, [by] not telling them what” to say. 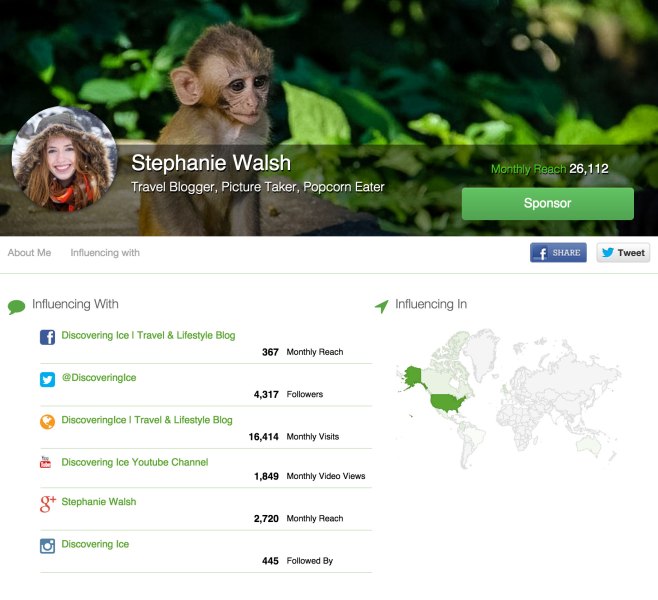 Above: An influencer’s profile page on Themidgame

Brands can choose to review and spike any videos or posts before they are published, however. And, in accordance with federal regulations, the post or video has to indicate somewhere that it is sponsored content.

The Y Combinator seed money will be used to enable brands to better track their influencers, the cofounders said, such as how much traffic the influencer’s endorsement drove to the brand’s site. They also want to test a program where brands would pay nothing upfront, handing over payment only in proportion to trackable results.

And they want to groom their influencers, who are non-exclusive to Themidgame, teaching them things like how to get more clicks.

“Influencers are startups,” Diaz said. Themidgame, he added, can help provide the resources and guidance that influencers need to become better entrepreneurs.

In other words, Themidgame wants to act as Y Combinator to its stable of talent.

“We’re teaching influencers,” he said. “We’re kind of like their investors.”

As for Y Combinator’s investment in them, it means much more than increasing their chances of getting rich.

“In Colombia, the startup industry is just being born,” Diaz said, noting that his country is trying to move beyond its agricultural base.

Just “being able to compete [in Y Combinator] is a privilege,” he said. “A lot of Latin Americans will follow our example.”

“Nobody in Colombia knows we’re at Y Combinator,” he said, adding that this story will tell them.