Google today updated Google Calendar for Android with a slew of new features and improvements. You can download the new version now directly from Google Play.

First and foremost, the app now has a 7-day week view. Whether you’re a workaholic or actually plan events for the weekend, this long-time-coming feature will be useful. 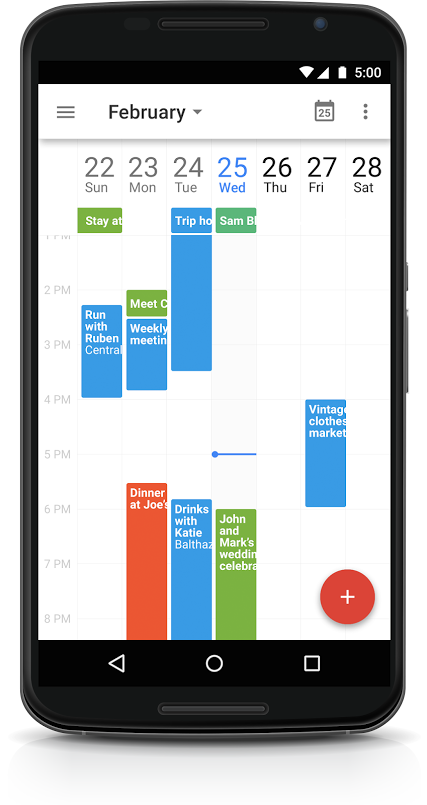 Next up, you can finally add Google Drive files to events. Best of all, the service will check if everyone you’re inviting to the event can open the file(s) in question, and prompt you to adjust permissions accordingly if not.

Speaking of files, you can now import .ics files sent to you in Gmail and other apps. This is mainly for power users (.ics is a global format for calendar files used by various calendar and email programs including Google Calendar, Apple iCal, and Microsoft Outlook), but it will save those users a few steps.

Other improvements include pinch-to-zoom (not as useful as in image-based apps, but still handy for when your calendar is overloaded with events) and a new option to show week numbers in settings. In case your company really wants you to get something done by week 14, this will be a good way to keep track.

Last but definitely not least, you can finally hide the birthday calendar as well as turn off birthday reminders from Google+ (maybe Google finally realized that this is what Facebook is for). This is available in the settings page, and Google says the feature will come to Google Calendar on the web “next week.”

Today’s update is the first major improvement to Google Calendar for Android since the major Lollipop-focused revamp in November 2014. Google says all of the above improvements are a direct result of user feedback.

In fact, Google says Calendar for Android has “more coming soon,” though it wouldn’t go into detail. As for the equivalent iPhone app, the company is “still working” on it.