Social media campaigns can get people talking. But how do they affect a company’s bottom line?

New York City-based LiftMetrix, which has built its platform to help answer that question, is out today with version 2.0. It is being released integrated into the dashboard of social media engagement and publishing platform Hootsuite, as well as in LiftMetrix’s own standalone cloud version.

Version 1.0, CEO and cofounder Nik Pai told VentureBeat, was designed “to answer the top question that social marketers ask: what is my ROI [return-on-investment]?”

Getting that answer, he said, meant accommodating the fact that “every brand defines ROI differently” by allowing companies to define their own objectives.

After the launch of 1.0, Pai noted that the consistent feedback was “customers wanted to know what to do next.” More specifically, they “wanted recommendations they could act on each day to grow [the ROI] they were now measuring.”

For instance, if they knew “this Facebook post led to $1,000 of commerce revenue,” what could they do to repeat and amplify that ROI?

That became the basis for 2.0, he said, which offers “plain English” insights and recommendations to boost your company’s definition of ROI with what Pai described as a “specific social game plan for your social manager to follow.”

The updated platform also includes an ROI Calculator for measuring financial impact by Facebook, Twitter, and other channels, as well as the ability to separate ROI into paid and organic content.

There is also now the ability to automatically pull in expense data from Facebook ads and to track social media-related costs. Content tagging allows performance to be measured by topics instead of only by posting actions. Competitors can be tracked and benchmarked, and users can estimate the reach and engagement of their content. 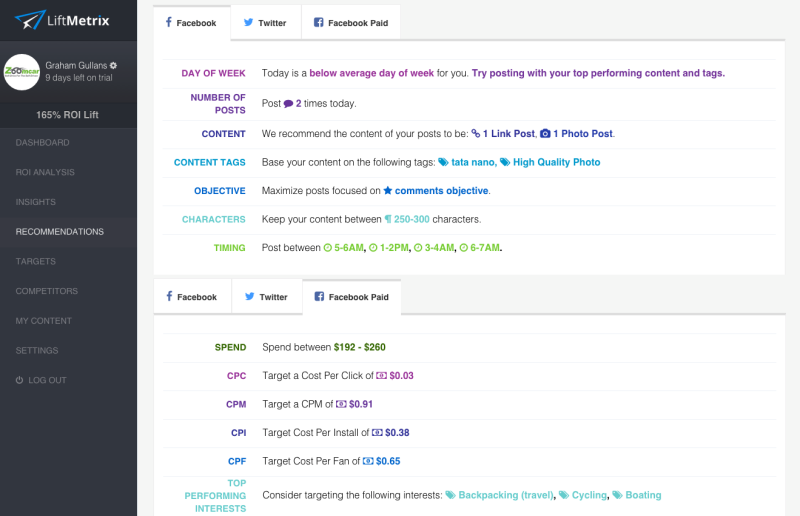 Above: A recommendations screen in LiftMetrix 2.0

The Hootsuite integration is designed to allow users of the joint solution to post content and buy ads based on LiftMetrix’s recommendations.

“What [Hootsuite] liked about [our platform],” Pai told us, is we can “do ROI on Facebook posts.”

LiftMetrix cofounder and COO Graham Gullans added, “We’re extending their publishing capabilities.” Hootsuite has analytics, he noted, and “they tell you what the numbers are.”

“We tell you what the numbers mean.” 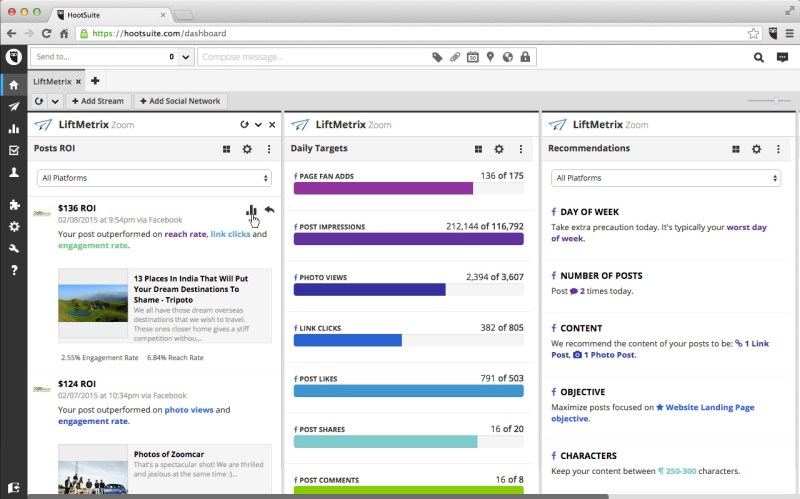 Above: LiftMetrix 2.0 integrated with Hootsuite

LiftMetrix said it distinguishes itself in what Pai described as “a sea of social tools helping people with social analytics” by its focus on ROI and plain-English recommendations.

“We’re the only one in the analytics space” focused on ROI, he said, rather than on engagement being used “as a proxy for ROI.”