Nextpeer made its name by turning single-player mobile games into multiplayer challenges. Now it is launching software to enable game developers to add a social layer to their games to increase engagement and improve the discovery of new games. 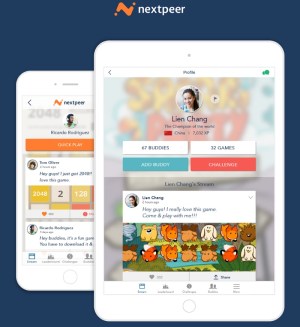 Tel Aviv, Israel-based Nextpeer’s new cross-platform social software development kit attacks the big problem of how developers can get discovered in an app store full of a million games. The social layer adds features that make it more likely for people to try new games, such as multiplayer gameplay, friend invitations, and seeing what your friends are playing. The social layer can be integrated into any game, and the result should be more revenues and engagement, the company said.

Other companies have done this in the past, but Nextpeer’s solution will live or die based on how easy it is to integrate and how convenient it is for mobile gamers to use on a smartphone or tablet. Nextpeer contends that the number of players spending money in a game can increase 500 percent when players see an ad of another person playing a game.

Players can invite friends from various social networks such as Twitter, Line, Whatsapp, WeChat, or Facebook. They can connect with other players from within a game, post rich messages to a news feed and interact with each other. The players can challenge their peers for live synchronous games, or those played with simultaneous movements, or in asynchronous games, where one player takes a turn at a time.

Rivals included the old OpenFeint network, which Gree purchased and then shut down. Heyzap also had a mobile social network, but it didn’t have the same multiplayer features within each game. The company shut down that network and is now a mobile ad network.

With Apple’s GameCenter, you have to leave the game, go to the app, and then come back to engage in social activity. Unity’s Everyplay and Kamcord also have features that compete, such as a social layer, but they don’t provide the multiplayer function.

Nextpeer also lets players share snapshots — a frame capture of the best moment in a game.

“The way you communicate with other players is important,” said Shai Magzimof, chief executive of Nextpeer, in an interview with GamesBeat. “You want to share it at the right moment. People want the best moment, those one or two seconds that capture the best moment.”

Nextpeer’s own network connects a game to a community that plays other Nextpeer games. The social layer helps with discovery through native ads, snapshots of game highlights displayed in a livestream, news feeds, and other methods. The platform supports player vs. player challenges, leaderboards, chat, and push notifications with specially crafted social triggers to ping back players and motivate them to come back to the game.

Developers can integrate the basic SDK in a matter of hours, said Magzimof. It may take a couple of weeks for the more advanced version, which has fully interactive multiplayer features such as seeing and interacting with the other players in real-time. You can play other players across either iOS or Android platforms.

“We’re basically creating the ‘Xbox Live’ for mobile or what GameCenter and Google Play were supposed to be for gamers and game developers,” Magzimof said. “The new focus is all about player experience and a true social experience.”

The SDK supports a variety of game engines, including Unity, Cocos2d-x, libGDX and UIKit. Players using the platform will have in-game friends, be able to message other users, post to the network’s news feed, and challenge other players.

The SDK is available now for iOS developers. The basic version is free with ads. An ad-free version will cost $200 a month. The Android version will be available in the upcoming weeks.

To date, Nextpeer has 6,678 registered developers and 14,307 games. The SDK has been installed 162 million times to date. Gamers have participated in 114 million multiplayer tournaments, and 25 million players use the service monthly.

Nextpeer was founded in 2012 and it has 12 employees. The company raised $2.8 million to date.