Mobile World Congress has emerged as the premiere event in the mobile telephony space. It’s not the biggest event for app makers, but most of the handset makers, infrastructure companies, and wireless carriers will be represented there in some way.

VentureBeat will be represented there, too, by me and my esteemed colleague Chris O’Brien. We’ve already received a boatload of email from companies big and small that will be there hyping their wares. And a few themes have emerged. Here they are.

The next billion smartphones

Facebook’s Mark Zuckerberg will be giving one of the keynotes at the event. This is significant because Zuck has been working on his Internet.org initiative that seeks to bring Internet service to the 4.7 billion people around the world who currently don’t have it. Internet.org is a Facebook-led initiative in which tech leaders, nonprofits, and local communities are working together to connect the unconnected.

The majority of those unconnected will eventually connect using a smartphone, which presents a huge opportunity for phone makers. Many of the handset makers we’ve spoken with are planning to roll out or show off new smartphones that are affordable enough for large numbers of people to buy. Premium smartphones like the iPhone 6 and the forthcoming Samsung S6 tend to get most of the press, but many companies are now more focused selling mid-market and down-market phones in emerging markets like India and China.

For example, Motorola announced last week that it would be delivering a mystery device to tech media outlets. Many of us thought it was going to be a clever way of announcing a new premium smartphone. But when the package arrived at the VentureBeat offices this morning, it turned out to be the Moto E, a $150 phone with respectable — but not terribly impressive — component parts. It’s actually an upgrade of an earlier version of the phone, with a faster processor and a new LTE radio baked in.

The best thing about the new device was the “press conference in a box” it came wrapped in: 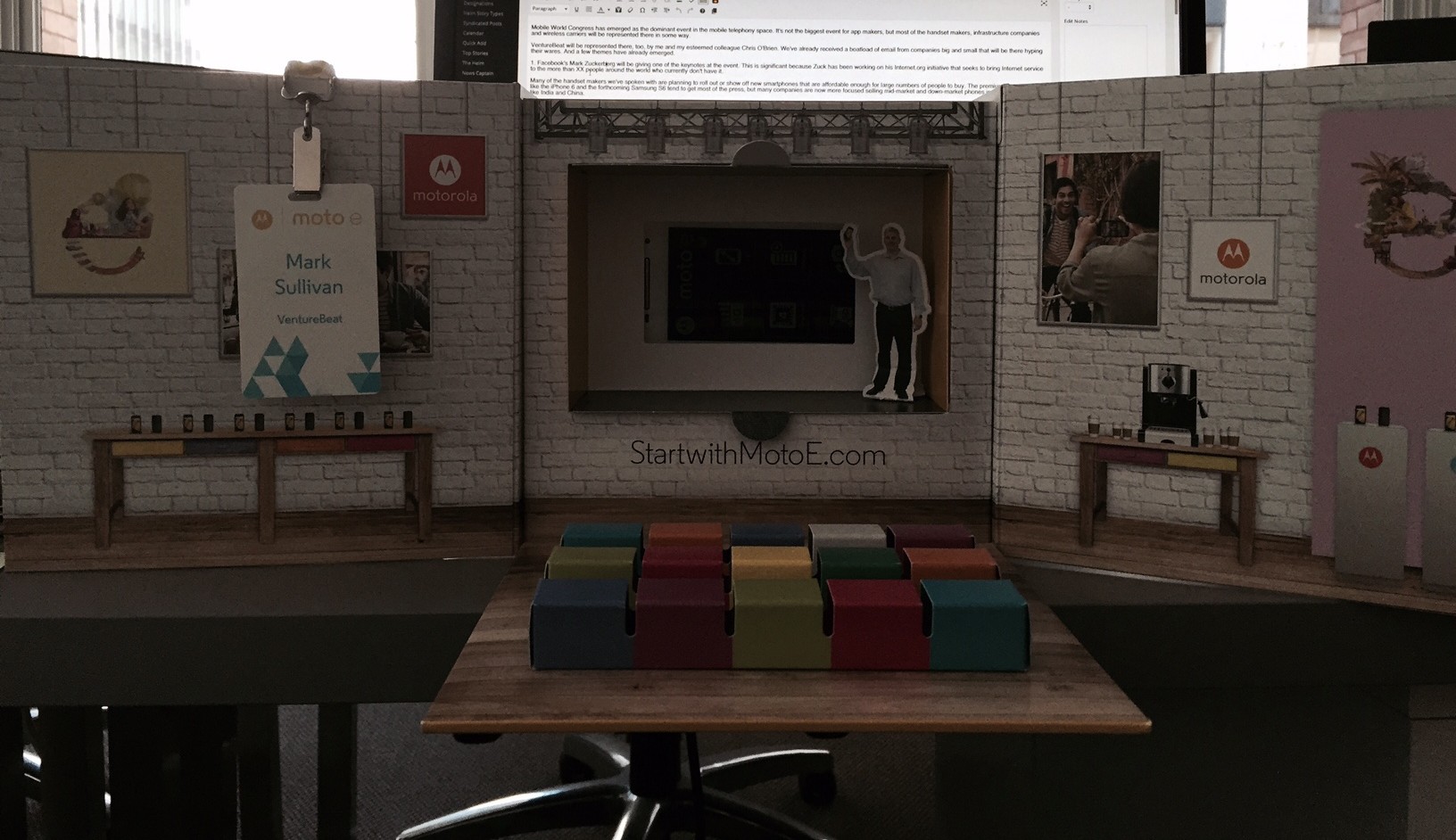 And there will be many other handset makers at MWC showing off new mid-market and low-priced phones, continuing on a theme we’ve seen for the last couple of years. These will likely include Acer, Huawei, Lenovo, and LG.

On the premium phone side of things, HTC is expected to raised the curtain on its hotly anticipated One M9.

Sales of Samsung’s last premium phone, the Galaxy S5, were disappointing. Reports said that Samsung sold 40 percent fewer S5s than expected during 2014. While much of Samsung’s efforts have been focused on selling lower-priced phones, its premium phones are still hugely important — not only for the sales, but for Samsung’s brand cachet. If Samsung’s hard-won reputation as the best maker of Android phones in the world is tarnished, sales of its phones in all price ranges could suffer.

And Samsung’s rep has definitely suffered. During 2014 it was Apple that got most of the attention and accolades after the release of its highly regarded iPhone 6 and 6 Plus phones. The main thing that sold the iPhone 6 was the pent-up desire among iPhone users for an Apple phone with a larger screen. So many of those people held off on upgrading until the iPhone 6 arrived.

Samsung played the “bigger phone” card long ago, when it announced the Galaxy Note “phablet” at CES in 2011. Now Samsung needs a new trick (as Apple will, when it’s time for an iPhone 7). The company will be announcing a couple of new phones in Barcelona, and there’s a lot riding on the new devices. Samsung is hoping that the new S6 line will bring back the its old mojo and get people excited about both the hardware and the way the Android OS plays with Samsung’s TouchWiz user interface.

Some industry observers don’t think Samsung can get it done with hardware alone. “To truly differentiate from Apple, Forrester analyst Thomas Husson said, Samsung will need to offer more compelling content, software, and services that serve consumers in their mobile moments. “If the key takeaway from its press event is around hardware innovation, Samsung will continue to suffer this year,” Husson said.

It’s possible that Samsung will use MWC to launch one or more new smartwatches that run on its Tizen operating system.

At any rate, Samsung will be holding a big press event in Barcelona, and VentureBeat will be on hand to get a first look.

Mobile World Congress is the biggest event of the year for the companies trying to sell their chips into mobile and wearable gear of all kinds. Both Intel and Qualcomm will have major presences at the event (VentureBeat will be meeting with executives from both companies).

Intel has been somewhat late to the party in the mobile space, with the majority of the design wins in premium and mid-level phones going to Qualcomm. But with the mobile revolution in full swing, Intel is putting a lot of people and money behind an effort to compete in mobile. Expect Intel to talk about some new LTE chips in Barcelona.

Samsung may have the only chip manufacturing facility that can do the most advanced fabrication process — 14 nanometer — at scale. This is the reason that Samsung decided to design and manufacture its own processor for its new premium phones. While Samsung has not made the full specs available, it’s possible that Qualcomm has lost the LTE modem chip in the devices as well, replaced again by Samsung LTE chips. We will soon find out.

Qualcomm, for its part, will be hosting several events in Barcelona, but the company is being secretive about their content. Again, we’ll have the information as it becomes available.

I was invited to a couple of briefings in Barcelona where infrastructure players (think Nokia, Ericsson, Huawei) will talk about their work with the next generation of wireless technology, 5G. “I expect network infrastructure vendors to start hyping the ‘huge’ opportunities that 5G will bring to telcos in the form of cost savings, network efficiencies, and new business models,” says Forrester analyst Dan Bieler.

Still, it’s very early. The network vendors are trying to get wireless providers thinking about 5G, and tech journalists and analysts writing about it. There are no 5G devices to talk about yet. And even the 5G technology standards have not been nailed down by the standards bodies.

Remember, though, that the discussion about 4G — and what really constituted 4G — started way before the technology was actually built into the networks. Actually, that buildout is still going on in many places around the world.

We already know that both Mastercard and Visa will be holding events at Mobile World Congress as they seek to heighten their visibility in the mobile payments space. The two are keen to be supported by the wave of new mobile payments and rewards apps that seem to be popping up everywhere — and many of these young companies will be on hand at the conference.

Here in the U.S. it looks like Apple Pay and Google may be headed for a showdown. Apple Pay seems to be popular with consumers, although the number of apps and merchants that support the service is still relatively small. Google has just purchased Softcard, the mobile payments platform that was created by AT&T, Verizon, and T-Mobile. This means that Google will get some new mobile payments technology, and, more importantly, the privilege of having Google Wallet preinstalled on many new Android smartphones.

We’ll be on the ground in Spain on Sunday when mobile’s biggest shindig gets under way. We will be sober, rested, and serious. And we’ll bring all the biggest phone, app, and services news as it happens.