Part of a personalized Citymap

At one time, map lovers were the ones who enjoyed seeing the patterns of crisscrossing streets printed on a large sheet of paper on the wall.

But, like most other information, maps are now a living thing. Today, New York City-based Citymaps is announcing it has nabbed $6 million — and is releasing version 2.0 — so it can continue creating a new way to love maps.

Citymaps’ app, available for iOS and now for Android devices, is a social map-making platform that enables users — or groups of users, as of this release — to build collections.

You can “create a collaboration collection with your friends called ‘Shop ‘Till You Drop’ that lets everyone add their favorite boutiques and stores” for a Saturday afternoon shopping trip, cofounder and president Aaron Rudenstine told VentureBeat.

For a trip to Paris, you can “invite your Parisian friends to your collection called ‘My Trip to Paris’ and ask them to add their recommendations,” he said, which would eliminate the need to exchange “long emails.”

Lovers can create a map of their favorite trysting sites, or teachers can lay out historical walking tours. Bakeries could jointly issue a sweet tooth tour of a neighborhood.

Version 2.0 signals that the company is now going worldwide, expanding beyond its previous U.S.-only coverage to every town and city on the planet and encompassing more than 80 million points of interest. There is now a recommendation engine based on your preferences and choices, and the company said places are treated visually with the same emphasis as, say, roads. An “Explore” tab allows users to find the most popular places and current deals in a given locale.

The new series A1 funding was raised from Coatue Management, Nokia Growth Partners, Acadia Woods LLC, and existing investors. It brings the total raised by the company to $11 million, and will be used to support hiring, development of a web product to complement the existing mobile apps, and creation of an infrastructure for monetization. 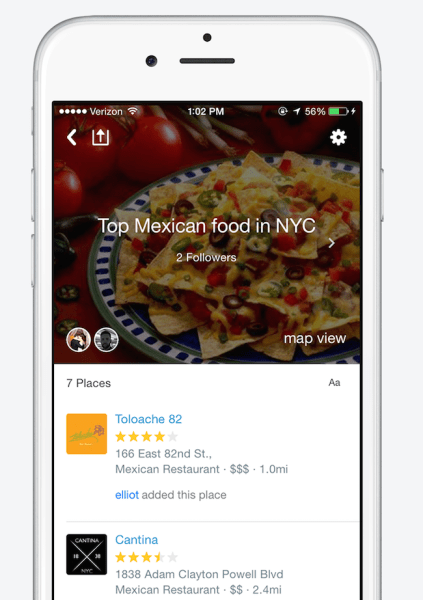 Above: A Citymaps screen with more info for one of the locations

Of course, having a map that allows you to add places to visit, eat in, and shop offers a lot of advertising possibilities. Rudenstine told us that “a dozen advertising units [were] built into the native experience of the map,” but they’re not yet implemented as the company focuses on growing its user base.

“A suite of merchant self-service tools that will enable merchants to promote themselves through our social mapping platform” are currently in development, he said.

While Google Maps, Yelp, and others offer various kinds of map functions, Rudenstine said that Citymaps “brings together multiple pieces of functionality that exist in disparate platforms,” including maps, social tools, and local discovery that surfaces places based on users’ interests.

Google’s mashups, he noted, are web-centric, all the layered items of interest look alike, and it is not as social.

“We’ve created a mobile-first map-making platform to create collections,” he said, and “no one else is competing” in this category.