One of these days, watching a hockey game over the Internet will be just as good as being there. That’s the idea behind a collaboration between the NHL and Otoy, which streamed a live hockey game in 360-degree high-definition virtual reality.

Cloud graphics startup Otoy worked with the NHL, New Deal Studios, and Immersive Media to create a unique experience for hockey fans. They captured the NHL Stadium Series game between the L.A. Kings and the San Jose Sharks.

Those viewing the experience could watch it from the comfort of their homes with devices such as the PC-connected Oculus Rift virtual reality headset or a Samsung Gear VR virtual reality mobile device. The video puts you in the middle of a 360-degree environment. You can look around in any direction, seeing things like tailgate parties, gate entry, the rink-side view, and the hockey game action. It’s like you’re there in person.

Viewers could change their perspective on a play, since the action was filmed from different angles. You could even position yourself directly above the goalie and goal line.

The creators tried to recreate the experience of all facets of being at the game, from the ability to watch practice sessions as if you’re sitting on the players’ bench to pre-game activities including tailgating, gate entry, and concessions, culminating in a front-row seat to the game with an eyeline just above the glass and over the rink that lets you follow plays or turn around to see what’s happening behind the net.

“Virtual reality affords us a tremendous opportunity to enjoy experiences we might not otherwise have the ability to,” said Jules Urbach, CEO of Otoy, in a statement. “Whether you’re a fan living on the other side of the country, or you just couldn’t snag a seat to the big game in your own backyard, virtual reality lets you be as close to the action as any ticket holder. The NHL has always been incredibly progressive about how it uses technology to give fans access, and we’re excited by the possibilities of harnessing OTOY’s virtual reality technology to help the league get fans even closer to the game they love.” 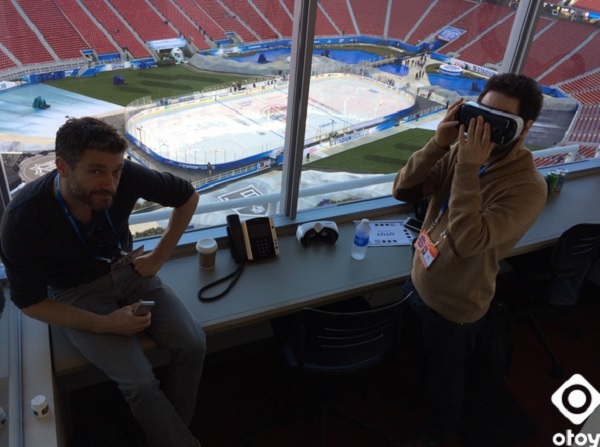 Otoy recorded the game at a 6K frame rate, with high-dynamic range. It used an experimental light field camera that is designed to provide even greater quality to the experience.

Peter DelGiacco, NHL chief technology officer, said in a statement, “With the advancements in virtual reality, the National Hockey League is excited about exploring the types of experiences this emerging field can bring to our fans. The outdoor game between the Sharks and Kings at Levi’s Stadium provided a great backdrop for a very successful first-ever test of VR technology in an NHL game.” The league views Otoy’s live streaming 360-degree VR technology as “second to none delivering an unparalleled fan experience that makes you feel like you’re there at the rink watching each play unfold with the rest of the crowd, even if you’re hundreds of miles away.”