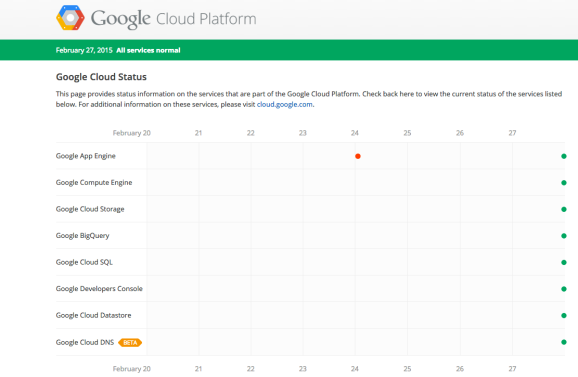 Google today formally announced the existence of a status dashboard for several of its cloud infrastructure services in the Google Cloud platform.

The dashboard first showed up online last year in “experimental” mode, but now that designation has been dropped. Google does still consider it to be in beta, though.

If you’d like to have updates on issues pop up in an RSS reader, you can do that now, according to Google product manager Amir Hermelin’s blog post today announcing the dashboard.

Google has been more and more vocal in the past several months about its intent to compete hard in the cloud infrastructure market, of which Amazon Web Services is the leader. Microsoft also holds a prominent position in that business with its Azure cloud infrastructure. Through price cuts, feature releases, and data center expansions, these companies are constantly trying to outdo one another. A solid dashboard showing the health of a slew of Google cloud services — not just the App Engine — is a crucial feature for engineers building or running applications on top of them. Indeed, Microsoft and Amazon have cloud service status pages of their own.

Check out Google’s dashboard for yourself here.