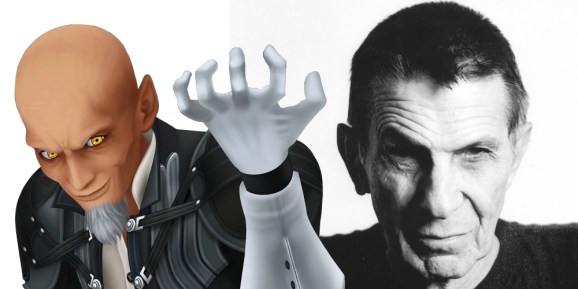 One of Nimoy's best gaming roles was as Master Xehanort in Kingdom Hearts.

A man famous for portraying a character without emotions is causing many to feel sadness today.

Leonard Nimoy died today at the age of 83 from end-stage chronic obstructive pulmonary disease. You can read his New York Times obituary here. He was famous for his role as Spock in Star Trek television shows and movies, but he also left an imprint in the world of gaming.

Of course, many times he portrayed the Vulcan he made famous in Star Trek games like Star Trek: 25th Anniversary and Star Trek: Judgement Rites. He also provided in-character narration for the massively multiplayer online game Star Trek Online.

But Nimoy had plenty of non-Spock roles in some high-profile games. He served as the narrator in the bizarre Dreamcast game Seaman, which had players raise and talk to fish creatures with human heads. He also had narrator duties for Civilization IV, a perfect fit for his deep, authoritative voice.

One of his most interesting video game roles was as Master Xehanort in the Kingdom series, specifically PSP’s Birth by Sleep and the 3DS’s Dream Drop Distance. While we usually associate Nimoy with heroic characters, in Kingdom Hearts he voiced the villain. In fact, his character was set up as the main bad in the upcoming Kingdom Hearts III. Sadly, unless the work for the upcoming sequel has already been recorded, Square Enix will now have to replace Nimoy in the role.

Yet all of these performances will live on. Star Trek Online is still active, and Birth by Sleep recently had a rerelease with upgraded visuals on the PlayStation 3. Nimoy’s last tweet said that perfect moments can not be preserved but in memory.

A life is like a garden. Perfect moments can be had, but not preserved, except in memory. LLAP

If nothing else, these game roles give us memories we can relive whenever we want.