Microtransactions are front and center in the new Nintendo 3DS match-’em-to-catch-’em game Pokémon Shuffle. Players have complained and in some cases reportedly hacked their 3DSes to get around the system.

You “battle” by moving Pokémon heads from anywhere on a grid to match others in lines or Ls or crosses, which then form an attack on another giant noggin. You have a limited number of moves to defeat the creature.

After you win, you attempt to capture the Pokémon you defeat. The more moves you have left, the greater your chance of success.

Please, sir, may I have some more? 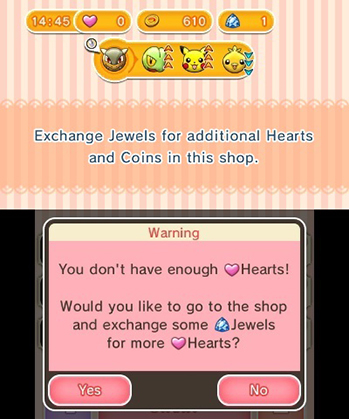 Above: Oh no, you’re out of Hearts. Well, Pokémon Shuffle has a fix for that.

Pokémon Shuffle‘s microtransactions are extremely prominent, and these will stop most players’ games.

Each battle versus a Pokemon costs a heart, and you can only have five hearts at a time. Each heart takes a half-hour to reappear … unless you buy more hearts with jewels.

It also has gold coins, which drop in limited numbers from successful battles. These can buy more-powerful Pokéballs for capturing vanquished Pokémon, other bonuses, or extra moves — but only if you obtain the moves them before a battle begins.

If you run out of moves during a fight, it prompts you to use or purchase a jewel to buy more moves. The gold option is no longer available then. Jewels can also purchase gold.

Shuffle extremely limits jewels, so the most common way you’ll get them is by buying them via Nintendo’s eShop.

The players are not amused 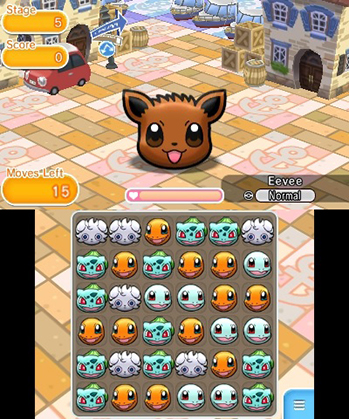 Above: Playing versus disembodied heads feels a little… strange.

Some players have complained about the transactions, especially because there is no “pay up front, play as long as you like” option for Pokémon Shuffle. They report being able to play in burts of up to 25 minutes. Others say that by playing carefully, they’ve gotten to level 90 without having to pay for a single pack of jewels.

It took less than a week before someone figured out how to use a 3DS browser exploit to hack the game, reducing the prices for all eShop items to 0. (Nintendo Life and Eurogamer posted on it earlier this week, racking up more than a hundred comments irritated by and defending the hack in a matter of hours.) The hack only works in firmware version 9.0-9.5 and not at all on the New 3DS XL.

I messaged a Nintento representative about the hack and the microtransaction model, but after 48 hours, the company had not responded.

“I am really enjoying the game and its actual gameplay mechanics,” commented LordDemigod on Eurogamer’s site. “I love how it doesn’t rush you to make your moves, like most match-3 games — you can plan ahead.

“But the time mechanic is really awful. I play through all five hearts in less than 15 minutes, and I want more. But I have made myself a promise I won’t spend a penny on it, and I haven’t — so it makes for one annoying wait. If I could just spend 10 pounds and play it to the heart’s content, no pun intended, it would have been a much better game.” 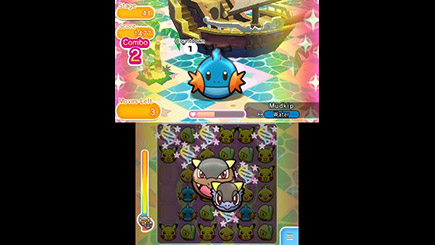 Above: If you line up a particular Pokémon in a particular way, you can trigger a special move that clears more of the board for a stronger attack.

It took me 35 minutes to run out of hearts the first time. That was including the tutorial, where they give you a jewel (worth five hearts) and a bonus of five hearts.

I picked up one additional bonus jewel after that from a credit Nintendo gave to players after some issues immediately after it launched. After that, my sessions were much more limited; five quick levels, about 15 minutes, and I’d be out until my hearts recharged.

While I didn’t get far enough for a full review, my initial impression was that it was a competent, if not exciting, match-game implementation.

The bonus moves that each Pokémon type on the grid have depending on how you combine them are modestly interesting, and catching and leveling your creatures does impact your grid gameplay, which made it more compelling.

I’m a huge fan of the original series of Pokémon games, but this comes off as much less human and compelling — I definitely didn’t feel like a part of a story, and my little Pokémon felt shorn of their personalities as well as their bodies, so leveling them didn’t feel as rewarding.

In truth, the interrupted gameplay due to the battle limits also made it fairly difficult to get seriously engaged with this; unlike many of the gamers who have been posting on this topic, I refused to either apply the hack or pay for jewels.