I’ve been checking out a Samsung Gear VR Innovator Edition virtual reality headset. And it’s been a fun experiment. The mobile virtual reality headset tells me a lot about the promise of VR, and the challenges that lie before it. Next week, at the Game Developers Conference, we’ll see a second generation of modern virtual reality experiences. I’m sure they’re going to be novel and cool, but they may still fall short of our dreams for some time to come.

My own home experiment has led me to this conclusion. Without telling her what it was, I had my 11-year-old try it out. I strapped the headset and tightened it as much as I could. It was too big for her. I snapped in the Samsung Galaxy Note 4 smartphone into it. I started an app called Orbulus, which lets you stand in the middle of a 360-degree panoramic image. She used her eyes to zoom in on an image in the midst of the Great Wall of China.

“Wow,” she said, with a genuine sense of wonder. Then she sat down and started crawling. 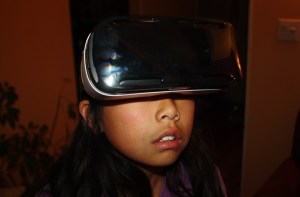 “I’m trying to get to the water over there,” she replied.

We laughed. The little one kept on looking around. She kept on looking around at different places, as if she were going into a world she had never seen before. Her older sister tried it out too. Then, after about 5 or 10 minutes playing around with it, they both said they were feeling sick. They went from those “wow” moments to feeling nauseated.

The sickness is clearly the biggest challenge. You can’t spend hours inside a virtual reality experience the way that you can with a video game. The screen on the Samsung Galaxy Note 4 can’t keep up when you turn your head, and the milliseconds of delay makes your body woozy. The team at Oculus VR, which Facebook bought for $2 billion, is aware of this challenge. They figure that VR running 60 frames per second in each eye will be fast enough so that the latency is imperceptible. The current wired version of the Oculus Rift can operate at about 90 hertz, but only if there’s a wire attached to it.

The Samsung Gear VR (which sells for $200 in the current Innovator Edition, without the $700 no-contract smartphone) can operate without wires. But the speed of the display is a lot slower than what the Rift can do with its best Crescent Bay version. The Note 4 has a 2,560 x 1,440 pixel organic light-emitting diode display. It is 5.7 inches diagonally, and it uses a Snapdragon 805 processor.

That’s quite a bit of computing power in a smartphone, but it’s not enough to run virtual reality worlds in the way that they should be experienced. Give us a few years and a few generations of smartphone processors and displays, and the technology will be ready. But we’ll also need to figure out the way to get my daughter to that lake in the distance and then enable her to interact with it. For that, she’ll need an input system, like the handheld gesture controls being developed by Sixense, and a way to walk around, like the Omni Treadmill. These systems make you feel like you can move around in and interact with virtual worlds.

But they’re going to add to the cost of the experience, for sure. That’s why the trajectory of the technology looks like it’s going to be a number of years before we get what we want. And once the tech becomes perfect, it will have to come down in price. Right now, the Samsung Gear VR is a much more accessible device. 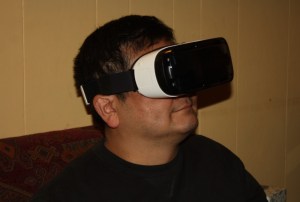 For VR startups, this means it could be a long wait before there’s a big installed base for apps. In fact, there are already a bunch of apps waiting for the Oculus VR store to open up for business. Whatever is there now is available for free, since neither Oculus nor Samsung have set real launch dates for their final consumer products. Startups: adjust your burn rate accordingly. You may very well run out of money before the market for VR truly arrives.

But I’m not discouraged. In fact, like many people in the game industry, I’ve been waiting a long time for these new kinds of experiences. When that market gets here, it’s going to be big. A good parallel is mobile gaming. When Apple’s App Store arrived in 2008, that was the starting line. Just six years later, Apple is generating $10 billion in revenue a year for app developers. It’s like somebody flipped a switch, and suddenly we have billion-dollar mobile games. We’re not quite at the starting line for VR. The billion-dollar VR game will arrive, but perhaps not for another six years.

I’ve been playing around with a variety of the Samsung Gear VR apps. It’s fun to discover new experiences with each one. I’ve tried out the SeaWorldVR, VR Cave Flythrough, Matterport, Refugio Flight Demo, im360VR, Shooting Showdown 2, MilkVR, Crazy Swing VR, and Rollercoaster VR. I consider these apps to be part of the age of experimentation for VR. They’re fantastic creations, but they’re all just demos now. Everyone is trying to learn from each other. 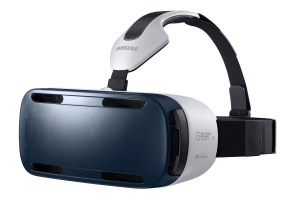 Above: Samsung’s Gear VR made in collaboration with Oculus.

Of those experiences, I enjoyed looking around in the little town of Hobbiton from The Lord of the Rings films in im360VR. It was very peaceful. I looked to my right and saw a mirror-like lake. On my left, there was a Hobbit hole. Above, the sky was blue, and butterflies were fluttering about. All you do in that scene is look around 360 degrees. When I showed that to my kid, she asked me again, “How do I move around?”

We’ve learned not to engage with any given app for a long time. But it’s cool to be a tourist in these worlds, if only for a few minutes. And the fun stuff isn’t just the games. For now, it’s just enjoyable to visit new places.

Next week, we’ll see what else the game industry has to show us about VR. Valve will be showing developers its Valve VR system alongside its Steam Machines and Steam Controller. Oculus’ John Carmack will give a long technical talk on Wednesday about mobile VR. We’ll see another rev of Razer’s Open Source Virtual Reality project, and Sony will show the latest version of its Morpheus VR project.

There are a lot of forces jockeying for control of the VR platform. I hope they all move in the same direction.

“I’m very excited about GDC,” said John Vechey, cofounder of PopCap Games and creator of the new virtual reality startup Pluto VR. “The ecosystem should be open. You don’t want to slow down the market. It’s better for consumers, and it will lead to better adoption of VR.” 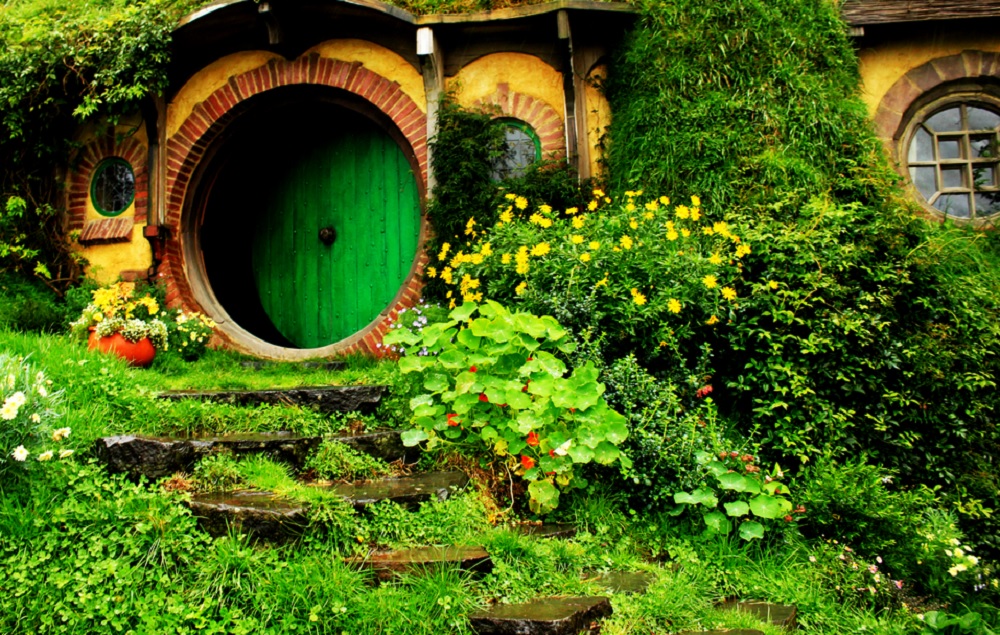