The question of the color of the now-famous dress has been debated ad nauseam. But now data from Facebook suggests whether you were on Team Blue and Black or Team Gold and White depends on how old you are, whether you were on a computer or a mobile device, and even whether you’re male or female.

If you don’t know what I’m talking about, you might need to hop on over to BuzzFeed and join the more than 31 million people that have viewed their now record-breaking post that looks at whether a striped dress that went viral on Tumblr is actually blue and black or gold and white.

The debate got so heated yesterday that it nearly took BuzzFeed down, not to mention swamping Thursday’s other huge meme, the escaped llamas. “Last night saw one of those beautiful moments made possible by the interconnected age we live in,” Facebook wrote. “Someone posted a picture of a dress, and the Internet lost its collective mind.”

Facebook, of course, is the kind of place where countless people were weighing in on the topic, so it is a natural place to investigate the demographics of who saw the dress one way and who saw it the other.

“The younger a person was, the more likely they were to believe the dress was black and blue,” the Facebook data science team wrote in a post analyzing yesterday’s dress madness. “All other things being equal, a whopping 10 percent more of 13-17 year old users were on team Black and Blue, compared to 55-64 year old users.”

Is that because of changes in people’s eyes as they age? Facebook’s data doesn’t address that, unfortunately, but that would be one obvious conclusion. Unless it has something to do with the kinds of color schemes that different age groups identify with. 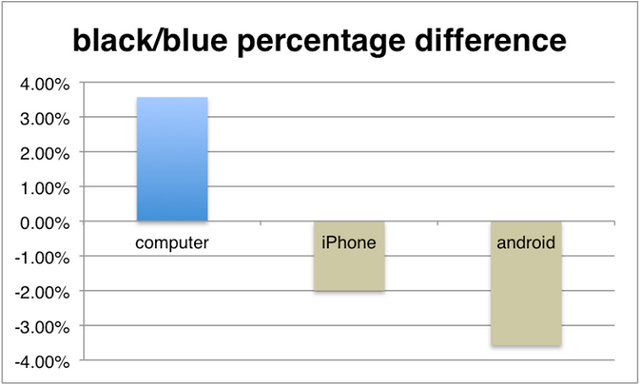 At the same time, there appeared to be differences in how people viewed the colors of the dress, depending on whether they were looking at pictures of it on a computer or on a mobile device.

“We wondered if the interface used by the person might have something to do with the percentage,” Facebook wrote. “After all, the same image might visually look very different depending on the light signature of the device used to view it. Making the assumption that people posted to Facebook on the same device they used to view the image, this was indeed the case: relative to people posting from a computer, 6 percent more iPhone users said that the dress was white and gold, while this number was 7 percent for Android users!”

This might have something to do with location, since, as the post notes, those on mobile devices are more likely to be outside, where there would be glare on the screen that might affect how colors on that screen are interpreted.

There are other demographic factors that might have affected what dress team you were on, according to Facebook. Men, for example, were found to be 6 percent more likely to be on Team Black and Blue than women, likely because more men than women are color blind.

But in the end, judging by Facebook’s data, it sure looks like the dress was gold and white. “In all, 42 percent of Facebook users choosing a side were on team Black and Blue, while 58 percent were on team White and Gold.”