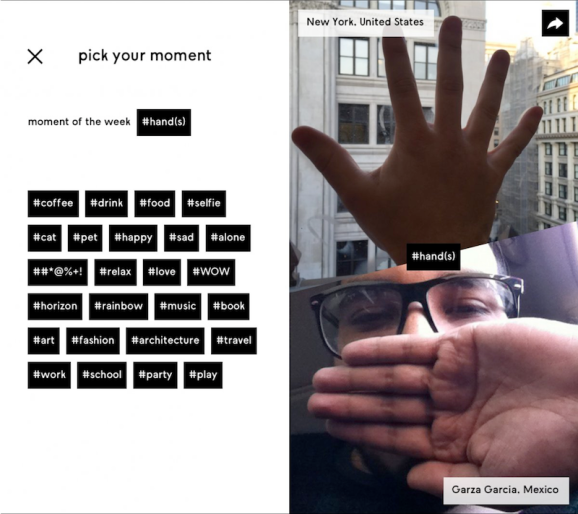 One of the biggest reasons Chatroulette became so popular back in 2009 was that it offered a window into the lives of strangers around the world.

There’s something exciting about seeing the world through another’s eyes, and while Chatroulette has since devolved into a landscape littered with creepy guys doing creepy things, a photo-sharing app called Tworlds is trying to recapture some of that same magic by adding some structure to the idea of anonymous, random connection.

The concept of Tworlds is pretty simple.

First you choose from a list of hashtags, or “moments,” like #work or #happy that are meant to be the subject of your photo. Tworlds forces you to take a new picture from within the app, which is designed to keep the experience feeling more like it’s happening in real time rather than turning into a place to share overedited photos taken days ago.

After snapping a picture of your workplace or something that brings you happiness, you’re immediately connected with a random user’s photo that shares the same hashtag somewhere else in the world. Tworlds stitches the two photos together, and you can even see the city and country of where your stranger’s photo was taken.

I actually had a lot of fun playing around with Tworlds, and I think it boils down to the structure that comes with connecting users with a common hashtag thread. If the app just randomly linked you up to another stranger’s photo, the unifying connection would unravel into Chatroulette territory. Comparing how someone in Turkey and New York interpret what a “happy” photo looks like, though, makes you think. It reminded me a bit of the photo prompts in the pen-pal app Wayfare, but simplified to focus only on real-time photo sharing.

I’m not sure whether I’ll still be playing around with Tworlds next week, but for those looking for a quick and easy way to explore the world through someone else’s phone, it’s worth a try.

You can download Tworlds over at the App Store.