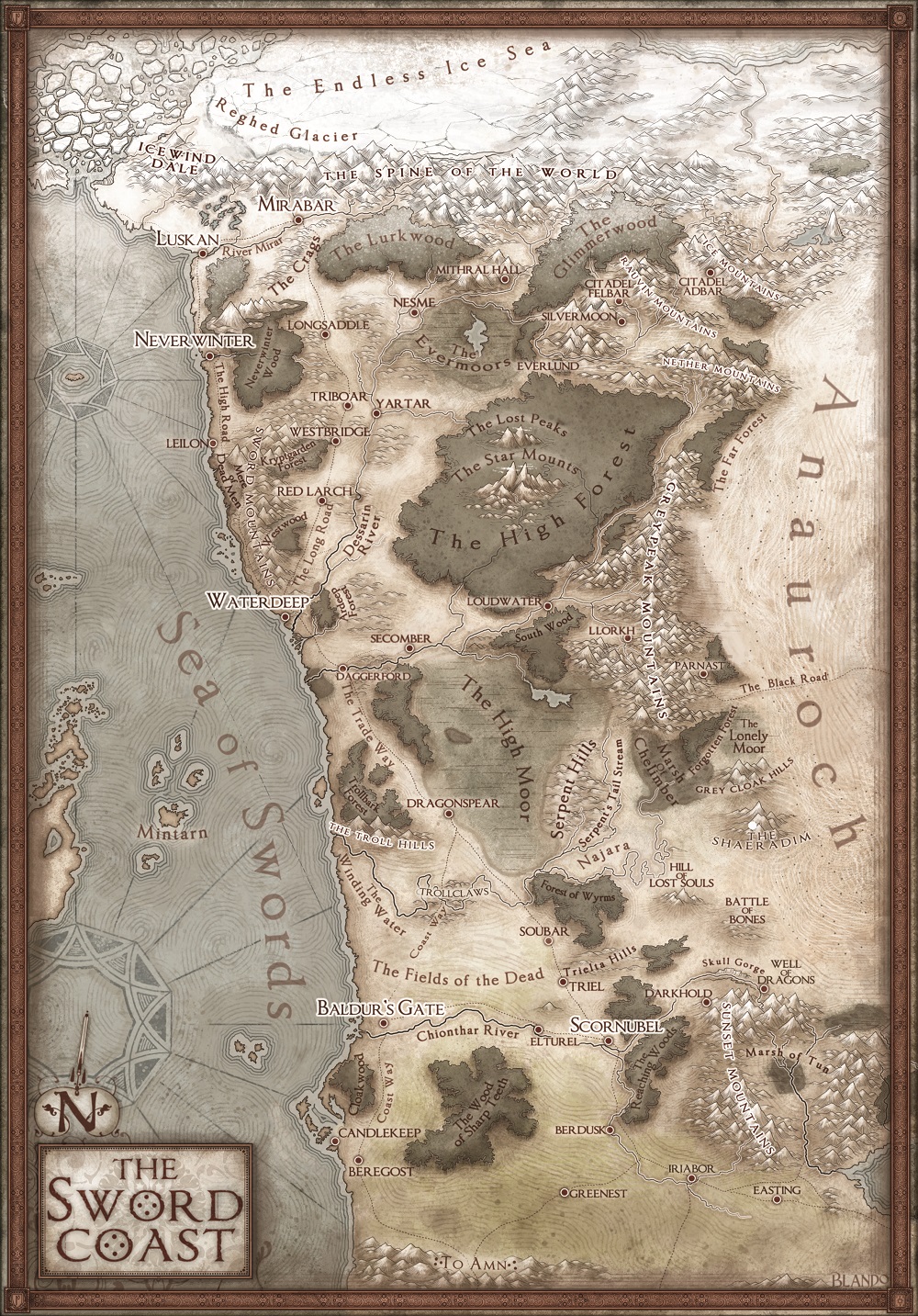 Above: The Sword Coast includes famous hubs of adventure such as Neverwinter, Icewind Dale, the Silver Marches, and Baldur’s Gate.

GamesBeat: Will that include Waterdeep or Neverwinter?

Tudge: Ah … we’re not going into detailed locations right now. I turned over to my PR handler here, and he’s looking at me with the evil eye. We’re not going into too much about the story and locations. But I can tell you this about the Sword Coast. When we looked at all of the Forgotten Realms, the nostalgia and the way we wanted to fit in that legacy of Baldur’s Gate and Neverwinter and Icewind Dale — the opportunity to place our adventures in the Sword Coast, not only because it timed out well with what Wizards was doing, but just all the nostalgia, the wash of nostalgia that came over us from being able to set our adventures in that area was way too much to pass up. That’s the main reason. In a way, you certainly visit new locales, but there are some familiar locales you’ll visit as well.

Stewart: I think a theme there is that this is the base game. We have a long tail planned for supporting it. We have a long-term partnership together. We’ll be telling stories together for a long time. It’ll become way more apparent as we roll out each new story theme that we’re telling during this time as to what areas and locations become necessary.

I like to take Waterdeep as an example of a great hub of culture and everything. It’s the New York or San Francisco, with all these cultures clashing. You can have people from out in the hinterlands or coming through on ships, a very cosmopolitan port. It works in Waterdeep. If the bigger story we’re telling has those flavor components, then that’s a great choice. Same thing in terms of our Tyranny of Dragons story, with Icewind Dale and that island off of Icewind Dale that was the perfect place for the Cult of the Dragon to be hidden in plain sight. The bigger point is that these guys know and love the Forgotten Realms. They know all these areas. I think we’ll want to play in each and every one of them. But the decisions as far as where and when different locations or cities or places above or below get done are based on the story stuff. Whether we go up into the clouds or down into the ocean, it really depends. These guys aren’t jumping in on Elemental Evil, but certainly the water element and stuff like that, that changes the locations you’re playing in. These guys are telling a fantastic story, and that’s the anchor point for the game and the locations on the Sword Coast. But I fully expect them to expand that, to go back to the roots and do that based on the stories that we’re telling.

GamesBeat: So Sword Coast Legends itself is almost like an old-fashioned Forgotten Realms boxed set? You’ll have other material coming out that builds on that set in the future? Is this right?

Tudge: Yeah, it’s pretty close. We’ve often talked about — we hope that fans love this so much and play this so much that it becomes the Sword Coast saga in a lot of respects. We have a lot of stories to tell and a lot of places we’d like to visit, a lot of people we’d like to meet. I can see this going for as long as people keep playing.

Stewart: I’d definitely like that. My ambition for this title from the beginning is for a new group of D&D players, when they talk about getting together and playing D&D this weekend and whatever campaign they’re doing, they’re talking about Sword Coast Legends. D&D is just the shorthand. It still has the DM and the player interaction and the crazy fun joking. But really capturing that essence and spirit. That kind of base set and then the modules that add on top of it and shape it, I love that analogy, because that’s what I see this game becoming, just a different version of that.

GamesBeat: You’re talking about your home campaign. Is that based in the Realms, or is it a world you created yourself?

Tudge: We’ve played a lot, everything from homebrew to — we played through the entire starter set when it came out. It was actually a well-written adventure. We quite enjoyed that. My 8-year-old boys also play. We’re playing through Hoard of the Dragon Queen right now. A lot of homebrew stuff over the years. I even played the 3.5 edition starter set with my two older children when that first came out. They’re grown up now. 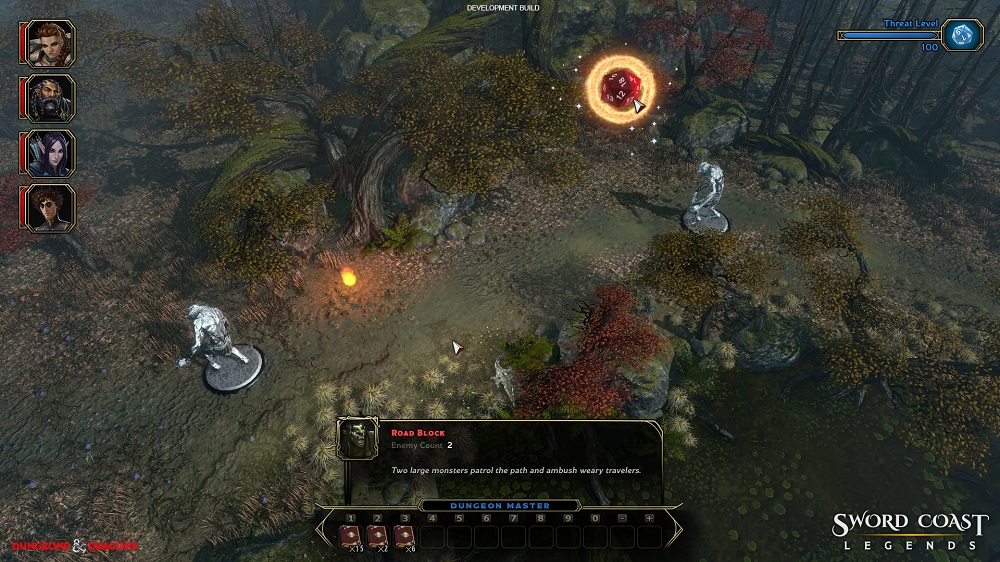 Above: Note the D20 on the screen!

GamesBeat: For the campaign edition of Sword Coast Legends, will it work like the LAN and the multiplayer play you have in the Baldur’s Gate: Enhanced Edition, but with an additional person running everything as the dungeon master?

Tudge: You’ll have one to four players in the party. Those players can meet up with other real players or characters you’ve met in the game. You can still play by yourself with three additional A.I. party members. Then the DM joins in as a real-time DM.

Right from the get-go, we wanted to make sure that, having been a DM — there’s a lot of work involved in preparing and having a campaign ready. We wanted to give people the opportunity to immediately jump in and start playing as a DM. We focused heavily on the real-time aspect of that. We have offline campaign tools that allow DMs to create very lengthy, almost limitless campaigns. But we’re not talking a lot about that right now.

We’re focusing more on the real-time interaction. They can change encounters, lay traps, change doors, make secret doors, spawn monsters, control monsters, promote them, demote them, you name it, all in real time to cater the adventure to the players.

GamesBeat: Are these going to be easier to use than the tools from the Neverwinter Nights games?

Tudge: I’m happy to say, absolutely yes. For me, the promise of what Neverwinter Nights offered was really exciting as a fan of D&D and a person who enjoys being a DM. Even before I worked at BioWare, I got in there and started working with those. I was a little disappointed. I come from an art background. I got in there and learned it, but I was a little — I was looking forward to something far more accessible, something that could get me creating adventures much quicker.

Right from the start, we’ve talked and made sure that is the case, that you can get together at 7 on a Friday night with your friends for a session and you can start in the lobby at the same time as the players and be DMing right away. You don’t have to spend a week preparing for the adventure. You certainly don’t have to be writing any complex scripting.

Stewart: Another point, you remember months ago now, you guys came out and we set up stations here at Wizards. We let everybody at Wizards who wanted to come in and play, whether they worked on Magic or Duel Masters or D&D, whether or not they were a DM. People who knew D&D but were not big video game people, definitely not any kind of technical people, jumped on and were DMing and having fun in five minutes. The whole team here was so impressed at how cool it was to be a DM, but also how you could really DM on the fly without having to have all kinds of crazy knowledge from the outside world.

Tudge: It was interesting, because initially, when you volunteer — when you have a group you’re demoing with and you let them play, nobody volunteers to be DM. Almost every time, one of the dev team ends up DMing. There’s this immediate intimidation. DMing has to be really complex, right? It has to be a lot of work. But I don’t even think the first dungeon run is even done before everyone is fighting over who gets to DM. 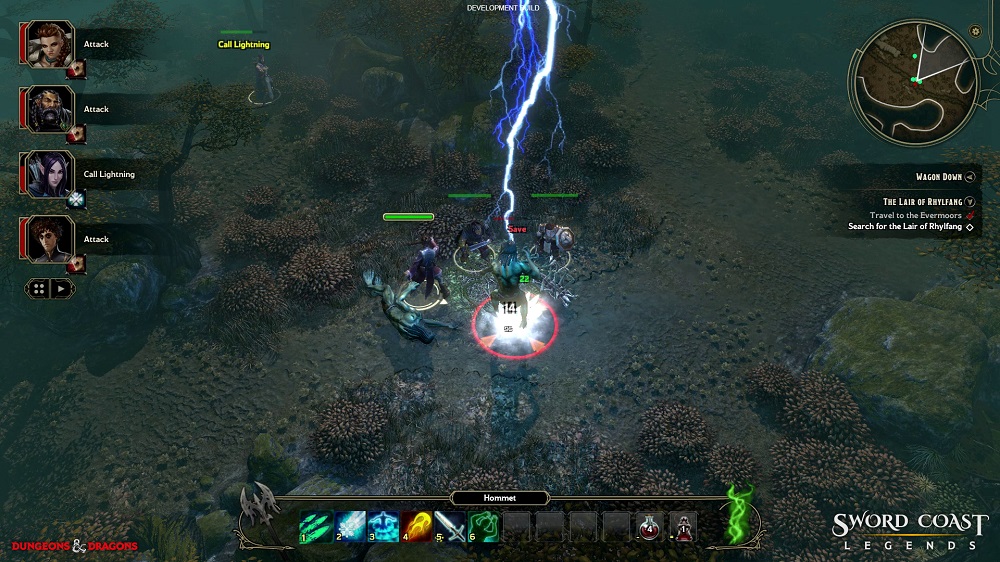 Above: If we could only contain trolls to being inside video games. …

GamesBeat: How well does this latest edition of D&D lend itself to a video game?

Tudge: For me it’s been great to work with. I started playing AD&D in 1979, so I’ve played through all the editions. I absolutely love 5E on the tabletop. I like the return to the roots that’s happened with it. At its core, to me, 5E is about getting in and getting those adventures and having a good time very quickly. I think that spirit lends itself very well to the adaptation in Sword Coast Legends.

Stewart: You know we’ve playtested for a very long time. A lot of the tabletop folks really appreciated that process. But we were doing something else in the background, making sure that our idea – that you could experience D&D and have it feel like D&D no matter which play experience you were choosing — we were making sure that was built into the current edition. It works fantastic on the tabletop, but it’s by design that Dan and his team would have an easy time adapting it as well. The choices that we made were to get the spirit of D&D and get the flexibility to the individual game-maker and developer or the individual DM. That’s a part of the core spirit of the current edition, to focus on storytelling over mechanics, to let people layer in complexity as they like. For a video game, they do that naturally. That’s just part of the process.

GamesBeat: You don’t have a Forgotten Realms sourcebook yet in the tabletop game. Is this game going to build on any of the lore that’s been established in the Sundering line of books or the Companions Codex?

Stewart: Kind of? Let me answer that question in reverse. The Sundering and the Codex stuff was laying a lot of groundwork for some of the changes that are happening, but you’re right, we don’t have a good sourcebook on the Realms or the Sword Coast specifically. We’ve been working with Bob, working with Ed Greenwood, working with Chris Perkins and the world-building team here. A lot of the stuff that’s going in the products coming out in the next year or two or three, Dan’s team and Dan’s narrative director are getting early access and ability to go straight to the sources on those. Products we’re releasing two or three years down the road, if it flavors the world these guys are playing in, we’re giving them early access to that.

Tudge: In a lot of respects we’re the bleeding edge on Realms lore as it gets put together.

GamesBeat: Have you read all those books yet?

Tudge: Oh, yeah. I’ve read almost every one of them.