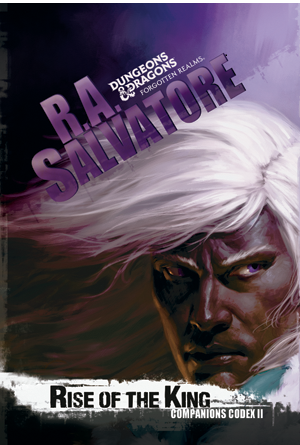 Above: Rise of the King is the most recent book on the adventures of that most famous dark elf, Drizzt Do’Urden.

GamesBeat: Which one is your favorite of the recent stuff?

Tudge: I really like The Companions. Candidly, some of the other big Forgotten Realms stuff, the R.A. Salvatore readers and all that, there were some mixed opinions about it. I went in on reading it and felt — the thing for me that I really like about it is that it’s origin stories. I have a soft spot for origin stories. I really enjoy Bruenor’s origin story and Regis’s origin story. That, to me — Catti-brie a little bit less. But those two I absolutely loved. It replaced The Crystal Shard as my favorite Salvatore story.

Stewart: I never think of that as an origin story. It’s funny to hear you say that. It obviously is one, but in kind of a crazy rebirth way.

Stewart: I never thought of it as an origin story until you said that, but it totally makes sense. It’s giving it the — I don’t want to say it’s the spirit of who these people are, but you get to take this viewpoint of, you’ve known who they were before, you know the endpoint they’re going toward, and you’re seeing their rebirth into the world, so of course it’s an origin. That’s a cool concept.

GamesBeat: In the Player’s Handbook and Dungeon Master’s Guide, you give the DM a lot of leeway in crafting their worlds and in crafting the Realms, even to where you may have dead gods back in your campaigns alive and well. How does that kind of leeway play into Sword Coast Legends?

Stewart: It’s the same spirit. We’re going to give that same freedom to the players in terms of what they want to do. The guys at N-Space are going to give them to tell their own stories at the table. It’s going to embrace that same concept. But because N-Space is, in essence, an extension of us and we’re all part of the same team, what you’re going to see in the official game canon in there is that they’re going to be very true to the stories and canon that we’re telling, in terms of gods and deities and their power and whether Lolth is or is not in the Abyss and stuff.

Sword Coast is going to be very true to the official canon, but we’re going to give the tools for gamers to tell their own stories and go off on their own tangents. They might just be in a different timeline. They might play 100 hours a week, where we can’t make 100 hours a week of content, and far surpass us along the timeline. It’s about giving them the tools, with the PHB and DMG and this game, to tell the stories that make sense to them and give them these great building blocks. We’re going to tell fantastic stories. We’re going to tell those on a pretty regular basis and give people something to be inspired by. But we would never dream of saying, look, our way is the only way. We’re just picking our way as a guiding light. We think it’ll be a tremendous experience, and then whatever way you want to branch off that, that’s the highest sign that people love our world. 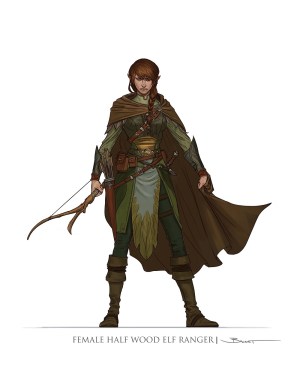 Tudge: My favorite class, that’s easy. Ranger. I play a ranger on the tabletop more often than not. Particularly, I play an elven ranger who doesn’t really like dwarves. That’s kind of my thing. If there’s any dwarves in the party I’m usually giving them the gears. My favorite monster, I really like giants. I’ve always liked giants. That probably stems from reading those early Conan books, where he fought the frost giants, and that Frank Frazetta painting. That’s burned into some really early youth memories. But I really enjoy the giants. Also, the illithids, the mind flayers, are pretty exciting for me too. Usually, whenever you face one, it’s a tough fight. I quite like that.

GamesBeat: What challenges do you see in bringing something like a giant or an illithid into a video game?

Tudge: Illithids, not that I’m admitting we have any of them in the game, but I can tell you right now, illithids are something that work really well in a video game. You can do some neat stuff with the mind control. Even in story situations, having them invade your mind and speak through your mind, there are all kinds of great stuff you can do with them. Even down to physics with the tentacles off their mouths and everything. They’re a fun creature to put in a video game. I don’t see the challenge there. Giants, obviously, in an isometric game there are some size issues that you’ll face. That’s something the play space will have to be adapted for. But still, they’re pretty cool. Large creatures are always fun to fight in a video game. Especially in our dungeons.

Stewart: We have bigger creatures than that. We have dragons, and that I’d be more worried about. But that’s just me.

GamesBeat: Why do you gravitate toward the combo of elf and ranger?

Tudge: That’s probably from reading The Lord of the Rings in the fifth grade, having a pretty big boyhood crush on Legolas and how cool he was. I thought he was pretty cool. I think that probably started some of it. Playing Baldur’s Gate and Icewind Dale, I often gravitated toward a ranger, because I like to play ranged. I enjoy the ranged combat. I did archery as a kid as well, so for me that’s quite interesting, to play the ranged character. If I’m not playing a ranged character, I’m playing a duelist, which I’ve also favored with the ranger. 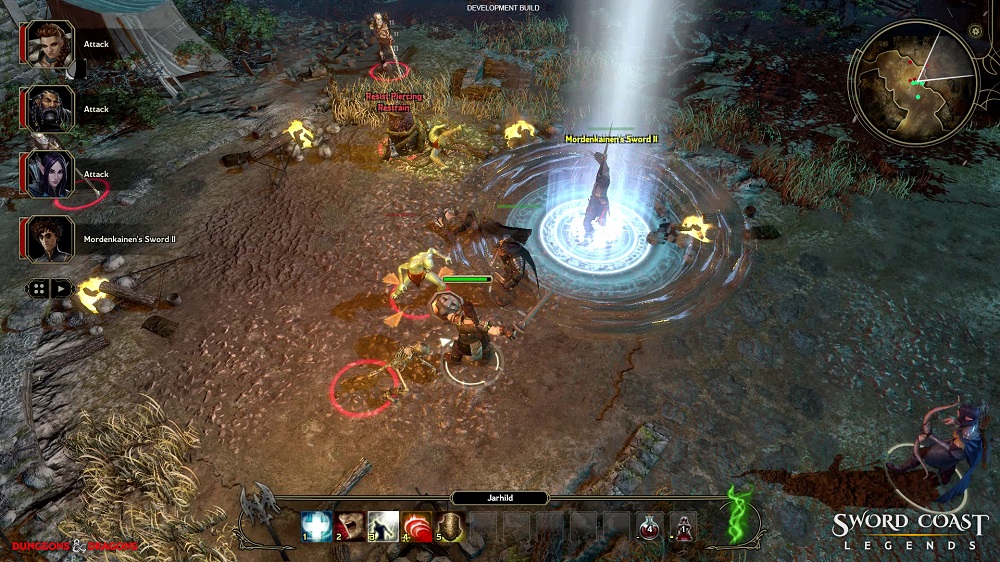 Above: This is the only way the archmage Mordenkainen makes it into D&D these days. Sigh.

GamesBeat: Can we expect to see a couple of really cool magic bows in the game, then?

Tudge: Oh, absolutely. You may actually even end up seeing my ranger character, my tabletop character, in the game somewhere as well.

Stewart: I know for a fact that the R&D team and your design team are really driving deep into magic items right now. You should expect to see lots of cool Forgotten Realms magic stuff in there. They’ve spent some good time. This is just, oh, magic bow, this is hours of figuring out the right thing, how deep to go. I’m really proud of the work you guys are doing. You’re nailing magic items better than a lot of people would do. Back to the first question on why this has taken so long, you want to find that team that’s passionate about it. They’ll go the extra mile on the things that make it really cool for someone who loves the hobby, as opposed to people for whom this stuff is just mechanics. It’s really important for you to have the special, key magic items that really make it D&D.

GamesBeat: Dan, what do the Realms mean to you?

Tudge: Memories. For me, I spent so many years adventuring the Realms. Not only on the tabletop, but in video games. For me it’s memories. There’s a lot of great memories of a lot of great adventures. You don’t just play in the Realms. You kind of live in the Realms, whenever you play one of these great games. That’s what I want to make sure the fans get out of it.