The two phones are in some ways a design departure from previous Samsung flagships, and Samsung is hoping the phones will bring back some of the mojo its mobile devices business has lost over the past 18 months in the face of new releases from rival Apple.

The new S6 is a 5.1-inch screened smartphone with rounded edges, while the new S6 ‘Edge’ is a similar phone with the same sized screen but one that curves downward at both sides of the phone.

Samsung called the design process of the new phones “emotional” during a briefing attended by VentureBeat two weeks ago. Samsung engineers stressed the process was governed by an emphasis on “meaningful innovation” and “purposeful design.” Not only did they want to recreate the image of the premiere Samsung phone, but they sought to build in features that save users time during the day.

And both the S6 and the S6 Edge are solid phones.

As rumored well before the launch, both phones run on Samsung processors, not Qualcomm Snapdragon processors, as had been expected. Samsung has a large-scale chip foundry that uses a cutting edge 14-nanometer process to push the number of transistors in the tiny mobile chips to new levels.

It is fast, from what I could tell. During my hands-on time with the S6 Edge, I turned on some HD video in split screen mode and began to launch apps and navigate around. I noticed no lag at all — the touch screen was very responsive and apps opened and responded quickly. 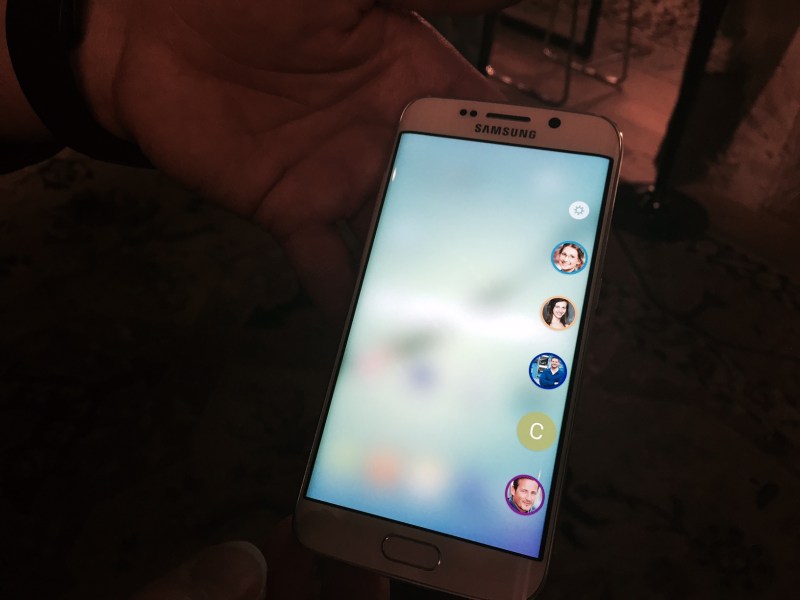 If Samsung’s new focus on simplicity and purposeful design is evident anywhere, it’s in the user interfaces of the new phones. The company has dialed its TouchWiz Android overlay way back, so that you see a lot more of Android’s elegant “material design,” and less clutter on top.

TouchWiz seems to have been stripped down to do a limited set of features that can legitimately help productivity. For instance, a screen splitting feature lets you pull a phone number from an email then punch it into a phone dialer that’s also visible on the screen. You can also save the number in a little bookmark on the home screen for dialing later.

A rep told me Samsung has been trying to rediscover the old “desktop” paradigm of the PC age, where users organize content and tools on a home screen for maximum productivity.

The 5.1-inch displays on the phones are 577 pixels-per-inch HD super-AMOLED. They’re brighter than in earlier Samsung devices, so that they’re easier to see in sunlit conditions.

After watching some HD video on both phones, I was impressed at how beautiful the picture was. This is Samsung playing one of it’s strong suits — displays — in these important new devices.

On the S6 Edge it seemed to me that the same video appeared just as big at on the flat screened S6, even though the top and bottom edges (when in landscape view) roll back from the flat surface.

I noted that the curved sides of the screen create very different feel with holding the phone; your hand is touching more screen on the sides.

The the curved edges create the illusion that the Edge is a smaller phone than the S6, but it really isn’t — just a different shape. 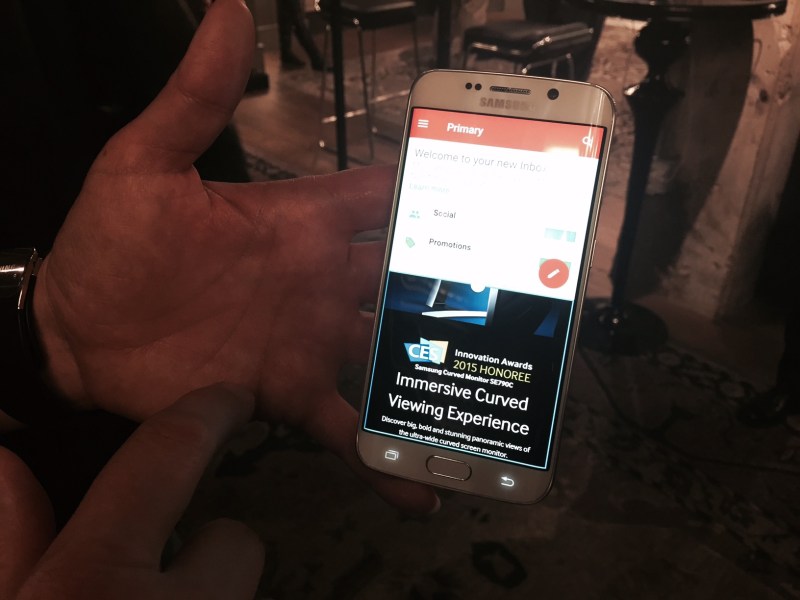 Both phones have dual-lens 16-megapixel cameras on their backsides, with F1.9 shutter speed. The camera has something called auto real-time HDR, which Samsung says reduces shutter lag. White balance is detected by a sensor and auto-corrected. Image stabilization software helps reduce shakey-cam. An autofocus feature puts a square around faces and follows them when you’re shooting people in motion.

The front camera is 5-megapixel, more than enough for selfies and video chats. This camera also has F1.9 shutter speed for more light, and auto real-time HDR.

Another improvement in this generation of phones is the speed at which they launch the camera. After a double-tap to the screen it takes well less than a second for the camera to get ready to shoot. This should help users avoid missing good shots while waiting for the phone. 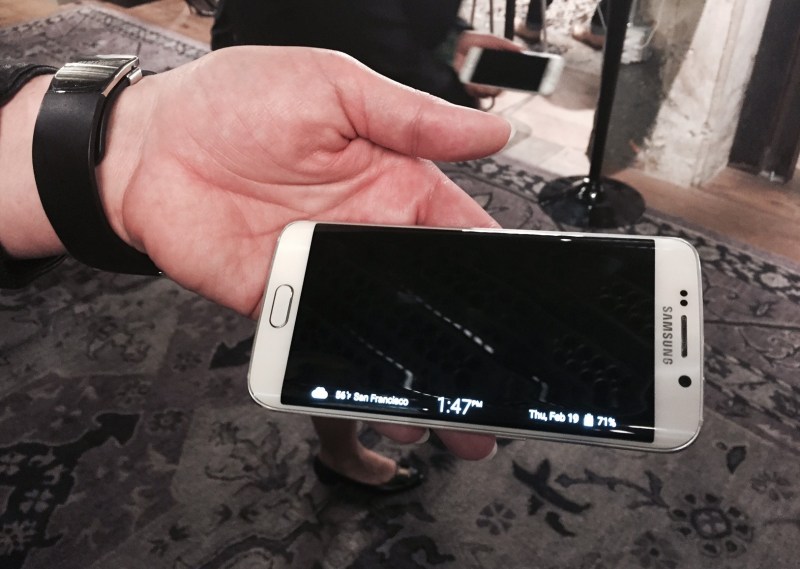 Above: The curved edges to certain interface functions independently of the rest of the screen.

Samsung also jacked up the speaker volume in the S6 and S6 Edge. I can attest to its loudness — it was clearly louder than the speaker in my iPhone 6 — but I did notice a bit of distortion at high levels.

The new phones, Samsung says, will come with the hardware to support near field communications (NFC), magnetic strip, and barcode mobile payments. But mobile payments won’t be included in the phones at launch.

Samsung has just acquired a new mobile payments platform, called LoopPay, that might help it compete against Apple and Google mobile payments. But the company will need some time to get that technology working on a large scale on Samsung phones, apparently.

The resulting mobile payment system will be called Samsung Pay, which Samsung says will be compatible with more merchants that any competing payments app. Samsung Pay will launch on Galaxy S6 and Galaxy S6 Edge in the United States during the second half of this year. 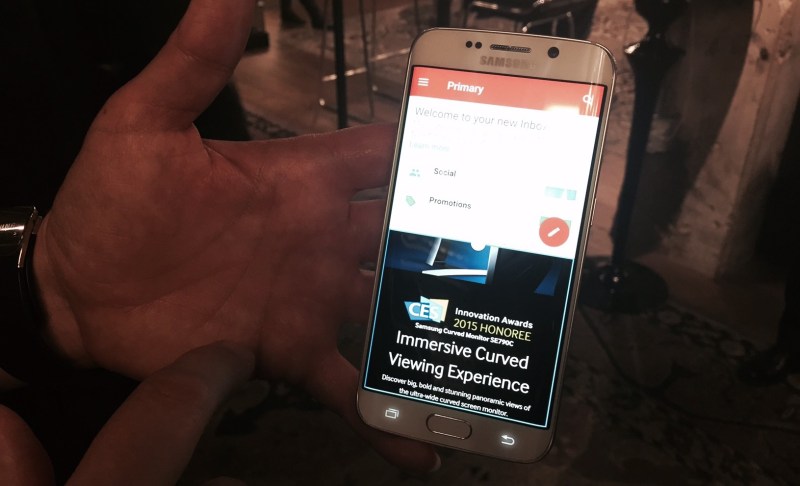 Above: TouchWiz in split screen mode.

There will likely be one difference between payments on Samsung vs. Apple Pay. One engineer mentioned that it would take two finger rests on the sensor to execute a payment — one to wake up the phone and one to authorize payment. Apple Pay lets you do this with a single sensor touch.

And as an added bonus, each S6 and S6 Edge sold will come with a two free years of OneDrive Microsoft storage (65GB limit).

After some hands on time, I was able to find a lot to like about these new Samsung phones.

The metallic green color of one of the S6 Edges was truly beautiful. The S6 comes in a similar metallic blue that also caught my eye.

I had been curious about how the curved-screen phone would feel in my hand, and I ended up feeling pretty comfortable with it.

I also couldn’t help but notice how much like the iPhone 6 the Samsung S6 looks. The rounded shape of the edges. The polished metal. But nobody ever said originality is the name of the game in smartphones. Maybe smartphone makers and buyers have just collectively, over time, zeroed in on what people want phones to look like.

And now for a Debby Downer final thought. The new S6 and S6 Edge will be great for people who like Samsung phones and are coming to the end of their service contract. The phones are meaningful upgrades to the last generation of Samsung premium devices.

But the new designs, the beautiful display, and the double curved edges on the Edge probably won’t be enough to make people ditch their current phones and contracts to get a new device.

This happened in a big way back in 2011 when Samsung was the first to hit upon the “large phone” paradigm with the first Galaxy Note (which Apple eventually accepted, too). Samsung gave people all over the world a compelling reason to get a new device. But these new S6 phones don’t bring enough “must-have” new features to the table to cause such a thing to happen again.