Updated at 11:50 a.m. Pacific with more details on Gateway and quote from TSI Partners.

Tired of painstakingly crafting your characters? Our have you fallen in love that half-orc warrior with whom you saved The Realm? You soon might be able to bring those adventurers from one role-playing game to another.

This morning, TSI Partners showed of “Gateway,” a tool that transfers the characters you make from one supported RPG to another. While this system from former Strategic Simulations, Inc., developers Keith Brors and David Shelley (remember those fantastic Gold Box Advanced Dungeons & Dragons games?) is part of the upcoming Seven Dragon Saga, it’ll also work with Kickstarter darlings Shadowrun: Hong Kong and Torment: Tides of Numenera.

If this sounds familiar, it’s because this used to be a staple of CRPGs. You could transfer characters from Wizardry and Ultima to The Bard’s Tale. You could also import characters from certain SSI Gold Box games to others as well.

“… We envisioned this as something that could be a real boon to players. We also wanted to keep things simple for developers and add greater utility to ‘Gateway’ over time,” TSI president David Klein told GamesBeat this morning. “Gateway creates a standard character format, so importing games don’t need to know the details of which game the character came from. If they see gaps between the character and their own format, they can use a query UI to allow the player make selections. And, as an example, if the Gateway format has the stats for strength and health, the importer could use them to derive unique stats like willpower; say the average of the two existing stats. The whole goal is to allow importing games to use as much or as little of the incoming characters as they feel comfortable.”

As for importing characters from games with different settings — say, steampunk to fantasy — Klein said that it wants to allow “your characters to continue their adventures in a new setting — while ensuring they can be imported without breaking game play or immersion.”

The studio told GamesBeat this could just include basic details, like the name, gender, age, or race of a character. But Gateway can also bring over classes, stats, and skills, and TSI said that this could even extend to equipment and currency. 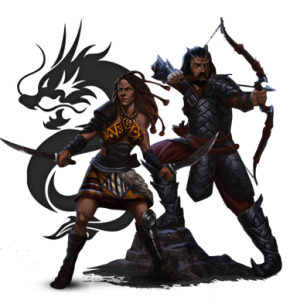 Above: Characters from the upcoming Seven Dragon Saga.

“We are really excited about the initial reaction to Gateway from the development community and, as gamers ourselves, we love the idea of carrying across our characters and adventuring parties into different RPGs,” said Shelley, the producer and lead designer of Seven Dragon Saga, in a canned statement. “From a technical standpoint, we are proposing an independent app that avoids any issues with an existing game’s user interface and makes it a quick process for developers to add to their games.”

“Gateway goes beyond being an import/export feature — it represents a development philosophy that I enthusiastically endorse,” said Tides of Numenera project director Kevin Saunders of InXile Entertainment in a canned statement. “By proposing and developing a data standard for game characters, TSI is establishing a stepping stone for independent CRPG developers to collaborate and share content and expertise. It is very much in the spirit of crowd funding and independent game development.

“As a fan of SSI’s titles, I’m thrilled at their return through Seven Dragon Saga and am excited they are spearheading this initiative through Gateway.”